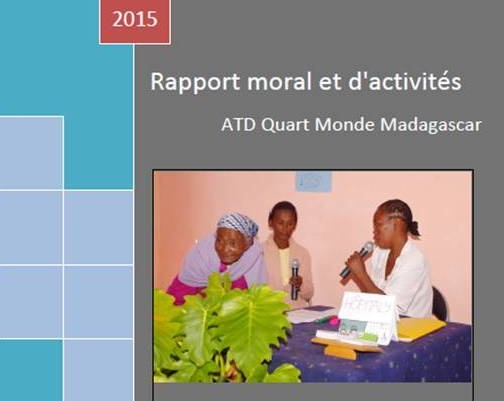 Preface by the president of ATD Fourth World–Madagascar

Most of our energy in 2015 has been directed toward planning and evaluation. We learned many lessons from our 2011-14 project “Together We Raise Our Heads”, funded by the French development agency. We also learned from the achievements of the Miasa Mianatra Miaraka (MMM) fair trade association, which was created by ATD Fourth World in order to help people in vulnerable situations train for and find jobs.

These lessons influenced our central goal of planning for 2016-2019: seeking out isolated families in poverty and giving priority to those coping with the worst forms of poverty. Drawing on ATD’s international Common Ambitions for 2013-2017, and led by our national coordination team, our members from Mahajanga, Toliara and Antananarivo all collaborated to draft a programme of work for 2016.

ATD’s Volunteer Corps members have emphasised taking time to get to know the community and to run grassroots projects, which are essential. The families living in Antohomadinika and Andramiarana began 2015 knee-deep in floodwater due to the tropical storm Chedza that struck in January. They were trapped in this disastrous condition for several weeks. Some were forced to abandon their homes, cattle and belongings in order to move temporarily into makeshift camps set up by the government and by the UN for disaster relief. Young members of ATD, joined by older allies and volunteers, took the initiative to start digging drainage ditches in several places so that the flood waters could drain away.

In 2015, for the first time in Madagascar, ATD began running a People’s University. Although this project is still only in its initial stages, it seems very promising based on the enthusiasm shown by activists during the meetings, particularly concerning this years’ themes of health and education. We continued running many activities for children (Street Libraries, Tapori, etc.). Also worth noting is the success of the Festival of Learning in Antananarivo, which involved many other non-profits and friends who work in the field of child development.

As in the past years, two hundred of our members came together for our annual family festival, held in Ambohimalaza. A painter helped each of our members to create a painting based on his or her ideas: about children’s future, discovery, hope, learning, solidarity, and many others. The World Day for Overcoming Poverty (17 October) was celebrated in three cities (Antananarivo, Mahajanga and Toliara). The year of 2015 was also marked by the 25th anniversary of ATD Fourth World–Madagascar. In addition, we progressed toward gaining authorisation to build a monument to honour the victims of poverty.