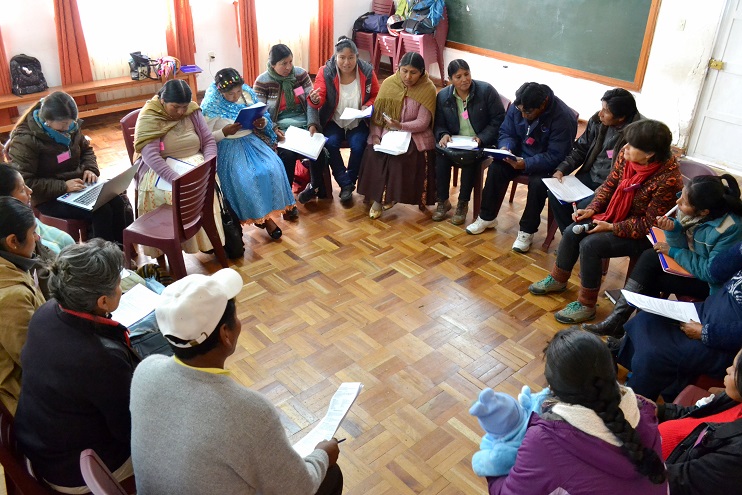 In Bolivia, a diverse group composed of people living in poverty, students, professionals, and academics has been working together for more than a year to build a list of new poverty definitions and dimensions. The work of this group from El Alto, La Paz, Huanuni and the village of Hornuni will contribute to an international research project being carried out by ATD Fourth World and Oxford University.

The Bolivia report is now finished, download it in Spanish.

The research is identifying ways to define poverty that are more descriptive of the reality encountered by people who experience it every day. All the participating countries – Bangladesh, Bolivia, France, Tanzania, the United Kingdom, and the United States – are using the Merging Knowledge methodology to create an environment where people living in poverty can participate on an equal footing with others who come from a completely different background.

Including People in Poverty in Research Design and Leadership

In Bolivia, the national research team includes four people who have experienced poverty directly, one academic, one professional, and two coordinators. All have been trained in the Merging Knowledge methodology. From April to June 2018, this team guided the work of 17 “peer groups” (people from the same background). Eight of these peer groups were made up of people experiencing or having experienced poverty or extreme poverty. In the other nine groups were primary and secondary school teachers, professionals from other sectors, students, and academics involved in economic and social research. The Merging Knowledge techniques were adapted for each peer group, building trust and allowing members to share their own understanding of poverty, depending on their personal experiences. Each of the 17 peer groups reached consensus on a list of poverty dimensions. They submitted these to the national research team along with a suggested title, a brief definition, and a list of features for each dimension.

The national research team then analysed the seventeen lists. The team members who had first hand experience of poverty compiled a collection of dimensions based on the work of the eight peer groups who had also experienced poverty. The team members who had no direct experience of poverty developed a list of dimensions from the other nine groups. The national team then worked to put together the two lists of dimensions using the Merging Knowledge methodology. They divided into groups according to background and then came together to agree on a final list of dimensions that represented the views of all 17 peer groups.

Verifying the Results with all Contributors

Then in late June, another Merging Knowledge seminar gathered 32 of the participants from the original peer groups. The goal of this gathering was to validate the final list of dimensions and to compare them to real life in Bolivia.

The June seminar demonstrated that everyone can contribute to this sort of research work so long as they are committed to understanding other people’s point of view. This is something ATD Fourth World has worked on for many years in a variety of research projects: creating the conditions that are needed for people with very different perspectives and experiences to work together to combine what they know into a more comprehensive understanding. Bolivia’s national research team has submitted their list of new poverty definitions and dimensions to the international research project. The national team will also take part in work on the lists from the five other participating countries. This research involving so many different groups of people – researchers, NGO’s, government representatives, practitioners, and people with first hand experience of poverty – has the potential to produce a new set of dimensions that will shed light on poverty eradication efforts around the world.
ATD Fourth World is developing an international report. That will be released in the first half of 2019, on the results of this research. ATD national teams that took part in the research with also be releasing reports in 2019.