Cameroon: Children’s Festival at the Little Dan and Sarah Foundation 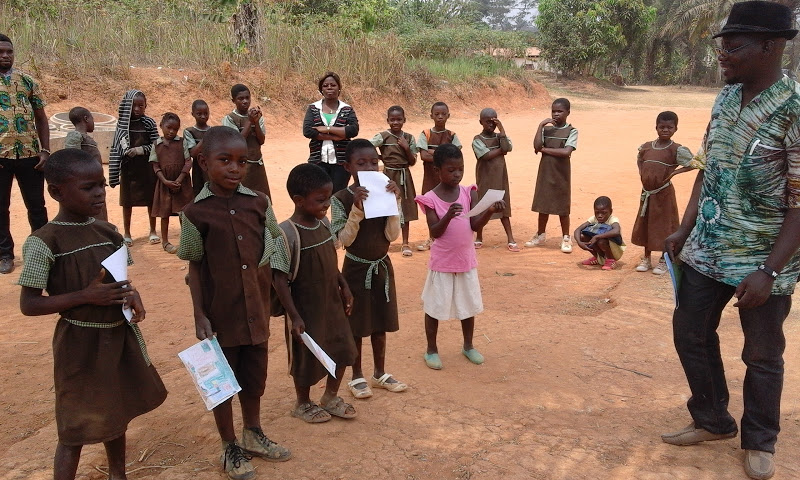 In early 2016, ATD Fourth World took part in the launch of Youth Week at the Little Dan and Sarah Foundation elementary and nursery school in Soa, Cameroon. The Media Library of the French Institute of Cameroon helped sponsor the event.

Children and facilitators gathered in the main hall, where Pico, a regular storyteller at the foundation, started the activities with a dance, a song, and an original presentation about “how to conjugate the verb ‘to eat’.” Emmanuel, of ATD Fourth World, read the Tapori story about Nelly with the help of Sariette from the Soa Volunteers Organization. Three workshops were then held. Participants in one of them made drawings inspired by the story of Nelly, another involved clay sculpture, and the third had the pre-school children racing to pick up balls. Everyone then gathered in a circle, and Pascal wrapped up the event by asking three participants from each of the art workshops to present and describe their work to the audience.

Using clay and broad strokes with pencils and crayons, the participants had represented Nelly and her grandmother, a family home, and a flag, among other things. Their work provoked strong reactions:

“People are sad when their mother isn’t there.”
“If you have to live without your mother, the family is sad.”
“In their homes, people stay in, eat, and sleep.”
“People without houses suffer.”
“I made the well to show that water is life and it must be shared, not kept for oneself.”

In their evaluations, the facilitators were happy with the day:

Edith: “I found that the students were very engaged.”
Blaise: “When we come, we notice more and more how much progress is made. The children connected to us.”
“The children were enthusiastic, their eyes sparkling during the story.”
“I’ve been transformed. These children teach us a lot.”

The children’s comments indicate how much they took in from the story: “Her grandmother refused to sleep with her.” “The teacher refused to allow her into school.”

Afterwards, Pascal offered training in Tapori facilitation to anyone who was interested. With his wealth of Tapori experience in the Congo, he emphasized that “the pedagogy of cooperation can help us a lot and can bring out the students’ talents.”

The day was also notable for the presence of Edith Noga of the Media Library of the French Institute of Cameroon, who was able to see the work of Little Dan and Sarah first hand. This led to an agreement between the two institutions to begin a long-term collaboration on educational, cultural, and recreational projects. In April, a storyteller from the media library visited the children of Soa, and the children look forward to visiting the library.

Youth Week is a lead-up to Youth Day, which has been celebrated on 11 February every year since 1967. Youth Week includes educational, civic, cultural, and recreational activities run by by the nation’s schools. This year’s celebration was special, with the theme “Youth, Citizenship, and the Fight against Insecurity for a Stronger Cameroon”. It marked the fiftieth anniversary of this festival dedicated to promoting young people: their place, their issues, and their future. The Department of Youth and Civic Education has initiated a number of projects, including building memorials; developing a youth logo, a youth anthem, and patriotic songs; creating a fresco depicting historic events; and producing textile garments “made with the initiative and ingenuity of young people themselves”.