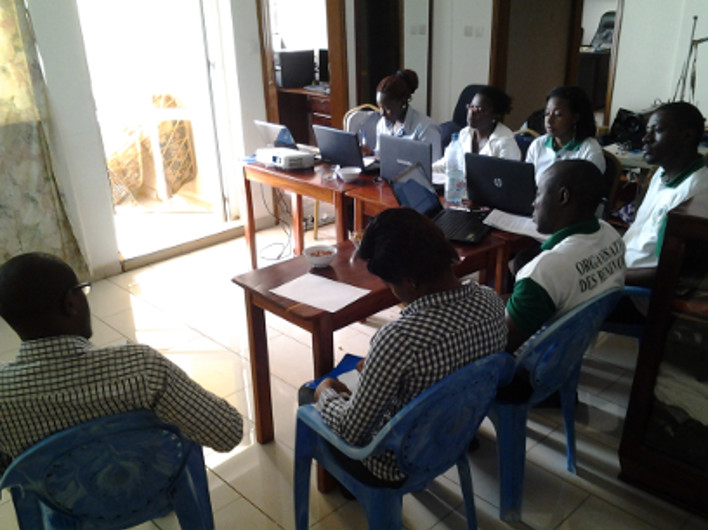 Pascal Chirhalwirwa is a consultant and trainer specialized in communications and community development in Yaoundé, Cameroon. He is also a member of ATD Fourth World. At the Yaoudé II University, he created a research group with students in order to teach them what he has learned in his engagement with people who live in poverty.

Pascal first met the college students during a visit to the Little Dan and Sarah Foundation, an orphanage in Soa about 17km from downtown Yaoundé. About ten students from the University of Yaoundé II Soa were present at the orphanage. They come from the group named “Volunteers of Soa” and regularly offer a helping hand to the coaching teams at the Foundation school. “We created our group so as to offer some of our time to these children and to others who may feel somewhat isolated from the heart of society,” one of the participants explains the group’s initiative.

Yes, there are indeed young students who offer their time to help disadvantaged peoples! In a world in which students’ time is increasingly valuable, the young volunteers of Soa are exceptional. Theirs is an act of courage and responsible citizenship which goes well beyond simple humanitarianism.

A meaningful way to spend time

In a context where students cannot waste their time because of the difficult conditions surrounding their studies, the initiative of the young people volunteering in Soa is out of the ordinary. It is a responsible act of courage and citizenship that goes beyond what some might see only as a humanitarian gesture.

For the young volunteers of Soa, time devoted to the children of the Little Dan and Sarah Foundation is a social investment, as one of the group members has underlined. “In this capitalist world, it is easy to abandon thousands of human beings at the edge of the road. The charity work which we do is not for profit. The joy which children feel every time we come to them is even more important than money which we could be earning from families that would be able to pay us for supervising children, for instance,” he continues.

The students learn from this project as well. Sariette, the student group president, says, “We live in a society where it can be hard to even find a decent internship. We believe that, by committing to this group, we could express our mutual concerns and offer each other our support. We can exchange information about work opportunities and develop our strengths. We do this at the foundation with the children and people like Pascal.”

Another student adds, “By granting us time to meet with students, the Little Dan and Sarah Foundation allows us to grow as well. Through our encounters with children, we also learn many things. Their life experiences teaches us a lot. As they tell us about their fears and joys, we learn to better understand our society and its challenges. We can relate with them about the challenges which await us.

Finding the path to research and action

Thinking about the students’ difficulties in finding internships triggered a series of meetings between Pascal and the group throughout 2015. Pascal, who is an independent consultant, says, “My little home office, from which I usually work alone, is now open to my student friends. We meet every month or two to discuss their “dreams” for their future professions. It is a time to share our diverse ideas about and experiences within the professional world.” They also talk about experimenting with a new kind of research.

To prepare themselves to act, and to focus on reaching out to isolated people, the students, either individually or in smaller groups of two or three decided to identify a situation of insecurity in their community, and to present it to the others as an issue to explore. The group then proposes a way to engage the people affected by the situation, in order to research together with them possible solutions to the problems that have been identified.

These group discussions are an educational effort and a move to observe, both individually and collectively, the problems in our society. These efforts stem from the group’s research on these problems and combine its scientific and theoretical knowledge with the initiative of people in poverty. This echoes the way that rural researchers know they must be attentive to the role that farmers can play to transform their own communities.

Dialogue as a focus for learning

“The wealth of our exchanges and the bonds of our friendship and trust are, for all of us, a social investment which we are all proud of today,” one of the students noted during the meetings.

Pascal adds, “During our meetings, encouraging dialogue and trust is an important element of learning, Also, by listening to other people, we encourage them to open up and express themselves fully. This expansion of dialogue has produced good results. When we feel as if other people are listening us, we find the courage to talk about our weaknesses and limits in one area or another. We have had instances of enriching and meaningful discussions. For instance, one honest group member who had insisted that he did not know how to create a powerpoint inspired other group members (almost the majority of them) to admit that they did not know how to do so either. This ultimately led us to have several tutorials in Power Point-making, and now everybody in the group has acquired this skill.”

Based on an interview with Pascal Chirhalwirwa