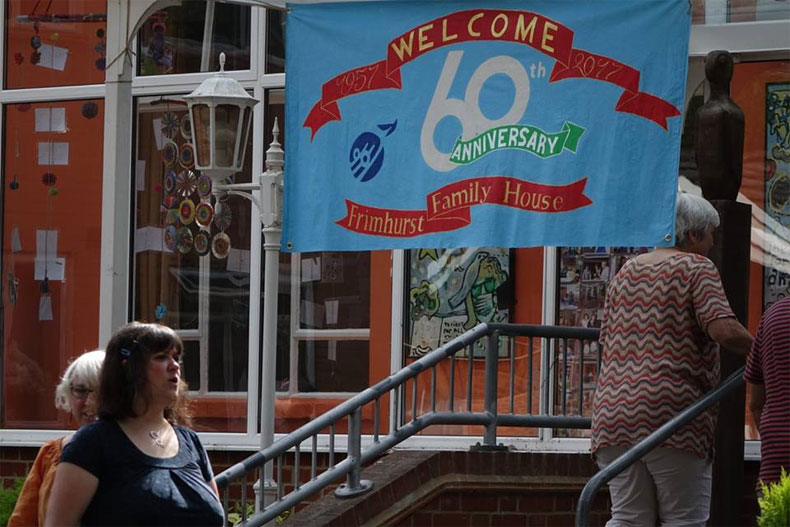 On a beautiful sunny day, Saturday, 8th July 2017, over 150 people came together to celebrate the 60th anniversary of Frimhurst Family House in Surrey, England. The remarkable Grace Goodman had bought Frimhurst house in 1957 and began welcoming families struggling under the weight of poverty and exclusion. Her vision was to create ‘a place of freedom’, a sanctuary where families could rebuild their lives in dignity. After a chance meeting in 1962 between Grace and Joseph Wresinski, the founder of ATD Fourth World, Frimhurst went on to become the heart of ATD Fourth World’s work in the UK. Despite traffic congestion delaying the start of the anniversary event, the families arrived in their coaches in good cheer and looking forward to the day. They were joined by other invited guests, including ATD volunteers and friends, with people coming from far and wide, such as Germany, Switzerland, France, Spain, Ireland and Scotland. The house and grounds were resplendent with magnificent exhibitions and beautiful displays of colour. Nick Edwards (outgoing Chairperson of ATD UK) and Tish Mason (incoming Chairperson), as Masters of Ceremonies for the event, warmly welcomed everyone, as the excitement began to build.

After a period of settling in, the guests were invited to listen to a number of speakers. Mark Hogan introduced the international Stop Poverty Campaign of ATD Fourth World and in particular encouraged people to sign the campaign’s Call-To-Action. He was followed by Brigid Hickey-Williams, a former teacher who worked in Frimhurst in the 1970s and who stressed how listening and learning from the families who visited Frimhurst over the years had influenced her own project in Finchley Farm for socially excluded people. Next, Stephen Baker, who had worked in Frimhurst in the 1970s and 80s, spoke and highlighted the originality, courage, creativity and deep humanity of Mrs Goodman and the other staff who founded the house. He was followed by Seamus Neville, a long-standing activist of ATD UK who was accompanied by his son, Daniel. Seamus stressed how Frimhurst had been a learning tool for him and that it encouraged people who stayed there to pass on their experiences to others. He also read a poem from Daniel describing his childhood memories of Frimhurst. Then, Tammy Mayes, a family member for around 15 years, shared how she was never judged while in Frimhurst and how safe a place it was to bring her children to.

Moraene Roberts, an activist and a member of the leadership team of ATD UK, gave a moving address on both the origins of Frimhurst and its relevance for today. She recalled memorable family members who had passed away such as Maria Jones and Fred and Sue Potter. She explained how Frimhurst had succeeded in building families’ confidence and skills in contributing to the ongoing fight against poverty and injustice. For Moraene, “Frimhurst is still my safe place, a place of freedom, a place of respect. It has created a new history for people in poverty. We are not the problem; not the victims; we are part of the solution.”

ATD Fourth World International was represented by Martine Le Corre and Alvaro Iniesta from the International Leadership Team in France. Marine expressed how happy she was to be present at this fantastic moment to celebrate how families had over the years demanded the right to live as families. Frimhurst had sent out ripples across the world, had shone like the sun, and was known widely as a place of courage and resistance by families – a battle that is continuing today in many other places. The Leadership Team presented as a gift, ‘The Patchwork of Our Lives’, a tapestry made up of small pieces of cloth carefully stitched together and showing the history of families that have suffered in different parts of the world, which was presented to the UN in New York for the International Year of the Family on 17 October 1994. Martine shared the story of the first piece of cloth donated by a man from Burkina Faso living in extreme poverty. Following this, guests were invited to make impromptu addresses, and contributions were freely made by a number of past family members and a representative of Frimhurst Enterprises, a partner organisation of ATD Fourth World UK based in Frimhurst Family House and working with young people with learning challenges. With the formalities over, people were invited to tour the house and grounds to see for themselves a number of very interesting exhibitions which brought great significance to the fun day. These included the ‘Stories of Change’ which presented original photographs and personal profiles of the founding staff, including Mrs Goodman, Ruby Wiltcher (the house cook), Mary Rabagliati (who developed the family house after Mrs Goodman retired), Henri Bossan (legal advocate) and early family members, such as Maria Jones, Mary Totham, Fred and Sue Potter, and Graham and Rita Edwards, among others. The sense of history, courage, dignity and achievement evoked by this particular exhibition was palpable to all who were privileged to view it. A selection of film archives of Frimhurst Family House and a new series of video films, ‘Draw My Life’ celebrating the contribution of Mary Rabagliati were also shown. In addition, a range of creative activities were organised including face-painting for children, the framing of Frimhurst pictures, and the writing and reading of personal messages from family members.

Other highlights of what was a truly memorable celebration of family life were: At long last, as the evening began to draw in, the guests left for home after what had been a joyful and moving family celebration. Frimhurst is a place where families over the years have created happy memories and through the speeches, photos, writing, artwork and film on display, it more than lived up to its reputation on this very special 60th anniversary event. Frimhurst Family House is a living, powerful testimony to the right to a family life.

Well done to everyone who helped make the day such a great success.

By Mark Hogan and Naomi Anderson