Skip to content
Home > Europe > Netherlands > Forum Theater in the Netherlands: Looking Together for Solutions to Poverty

Forum Theater in the Netherlands: Looking Together for Solutions to Poverty 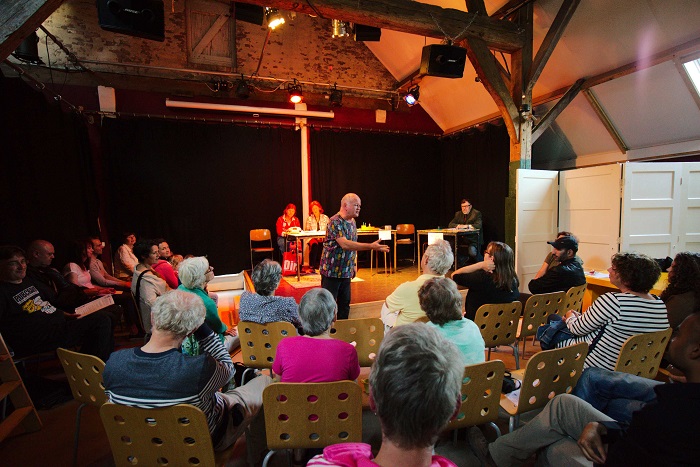 On 16 June, the local ATD Fourth World group of Amersfoort in the Netherlands gave a performance of a play entitled ‘And it Goes on and on’ before some thirty people.

What was so special about it? Well, simply that, in designing a theatrical creation intended to arouse the public’s reaction, it managed to include people who have been experiencing extreme poverty. The actors started from a true story, lived by one person in the group, to emphasize the vicious cycle of poverty. Led by Martin, an experienced trainer, and supported by Christine Béhain, a permanent volunteer with ATD Fourth World, they performed the play as a ‘forum theater’ piece – a theatrical form that makes it possible for the spectators to step in and alter the course of the play, and bring solutions to the problems raised.

The play tells the story of Margaret who is experiencing a series of discriminations at work when a person arrives and takes her place as the receptionist. She is then relegated to the archives in the basement of the company and she falls ill. When she decides to go and see the occupational therapist, the boss who is not happy with her action, fires her. She ends up in hospital, her child entrusted to her neighbour, the bills unpaid. She ends up losing her job, and then being threatened with losing her home. So the play shows the link between human rights and the consequences of violating a right which weakens all the others, and leading to poverty.

In the tradition of classical forum theater, the public should have replaced the main actress, but here the public intervened to replace the social worker or the neighbour, etc…. It was important to avoid stigmatising the people who live through poverty, often considered as being responsible for their situation. In replacing the actors of the play, the public is led to looking for solutions to support Margaret. The main actress, a lady who has been stigmatised because she was poor, performed wonderfully, speaking out against discrimination and prejudices. A member of the board of directors of ATD Fourth World also went on stage! Playing the part of the social worker, she was led to experiencing the tricky borderline between wanting to support the person in a difficult situation and being tempted to advise and thus freeing the person of any responsibility. In performing the play with the audience participants, we also promoted the #StopPoverty campaign, asking people to sign the call to action by writing personal messages as to why they felt poverty should be stopped.