Central African Republic: Four Young People (and Lots of Kids) Transform a Refugee Camp Into a Refuge for Beauty 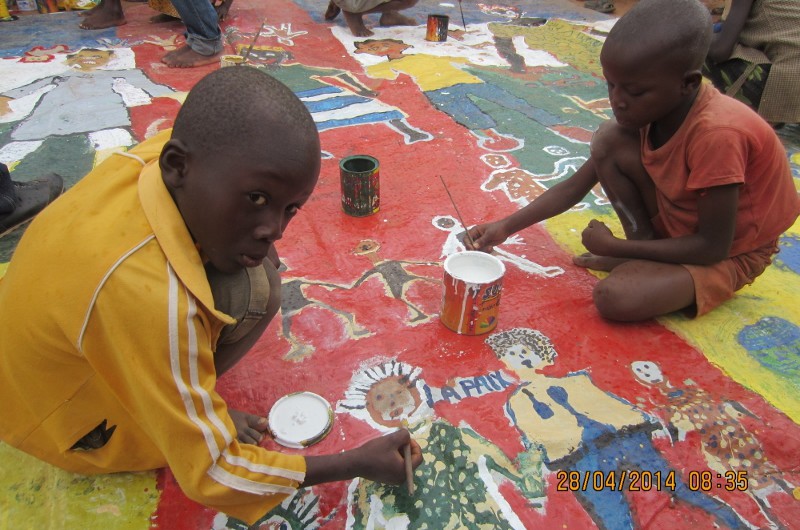 In November 2013, four interns: Antoine, Jean, Daniel, and Hector, entered the ATD Fourth World courtyard in Bangui. They had already been volunteering with the team for a few years and wanted to do a 3-month internship to learn more about our work. The team in Bangui was glad to welcome them, particularly a group so eager to reach out to the most excluded people in their neighborhood, village, and country.

For two years, the four of them had worked on a project to write and produce a DVD titled “Child of The World, Give Me Your Hand.” With other facilitators, children, and parents, they recorded and filmed in many different areas in and around Bangui.

Antoine lives in the center of Bangui. He is overflowing with creativity and imagination. He loves to bring together the children of his neighborhood around a book, a story… and then drawing. His hands work marvels, as they transmit their love of art. He is close with the children and knows how to make them feel welcome and to bring out their words and thoughts. One of the goals of the internship was to organize showings of the DVD in the neighborhoods where the filming took place, to try and bring pride and enthusiasm to the children who had participated in the project. The interns began by working on posters and a banner and then set out to the different areas to meet the local leaders, parents, and other facilitators – bringing together all their ideas in one festive afternoon. With the children from several neighborhoods together, they prepared a short sketch about peace.

Jean comes from a village 20km from Bangui. He is the youngest of the interns. Arriving at the courtyard is a challenge that he is proud to face, and over the months Jean is often the first intern to arrive in the morning. He takes various routes, and sleeps sometimes in Bangui. He is always there though, loyal to his companions, always with a backpack ready to bring a few books back to his village, to share more stories with the children. December 2013 to January 2014

December brought the most recent violence. The team in Bangui was obliged to stop the internships for two months in the interest of safety for everyone involved. But they all stayed in contact. The four interns passed by the courtyard to talk and share news from their neighborhoods. “We are together, and we stay together,” Hector said with pride.

Daniel lives with his family at the Bangui-M’poko camp at the airport. It took him two weeks to “get used to” the place, but soon enough the spirit of a leader came through. Around Christmas he re-started the street library in the M’poko camp. Since then, working with a team of facilitators, he has been bringing together hundreds of children to sing, play, dance, and listen to stories. February and March 2014

The internship started up again in February, but not as originally planned. The team set meetings for every Thursday to run workshops with the children who are part of the nearby organization “Voice of the Heart.” The regular meetings also serve to reflect on how to continue. Meeting, exchanging, discussing, it all kept them together and gave them strength and courage.

Hector has to cross the river every time he comes to the courtyard, but that doesn’t keep him from coming very regularly, even outside of official meetings. He comes to share his own news and to be in touch with others and the outside world. Hector is there for friendship, to share his knowledge, and to help the children of his country move forward. April 2014

The internship continued in April, though showing the DVD still wasn’t possible. The interns kept looking for what they could do to give joy and pride to the children. Antoine promised to go where there are friends they can visit without taking any risks – and so they started to go every Thursday to M’Poko to support Daniel in his activities there. They decided to work with the children to create something beautiful, all of them together, to mark this period of several months that they have been living at the camp – a message visible where people pass through. The project turned into a gift for the field hospital of Doctors Without Borders (MSF), “So that sadness will go away for a short time.”

The four interns worked alongside other young people already working at the camp for the past several months. They gave free reign to the children, who painted an enormous tarp from the United Nations High Commission on Refugees. It was total happiness. The children were concentrated, they took their time, they followed the outlines with their brushes – they were so excited to contribute something beautiful. A few adults also joined in to draw and paint. The work became a fresco with lively colors, silhouettes of children, and words of peace – drawn by hundreds of hands.

In May, after a quick touch up at the courtyard, the painting returned to the M’Poko camp. The young people worked with the personnel of the hospital to put together a structure in wood so that the painting would be clearly visible.

At the end of May, with a delegation of children, the interns officially gave the painting to the MSF field hospital. In one simple, beautiful moment, the children told what peace meant to them: “Playing together,” “Going to school,” “Being here with you and not hearing the sound of gunshots,” “Eating calmly with my parents.” They offered the colorful painting, “so that the sick and tired can be happy when they see it.” Four young people and a group of children had changed what was a camp for refugees into a refuge for beauty.

The conditions in the country disrupted their internship – it was a true challenge to persevere and reach the end together. We all admire their team spirit, and their determination!