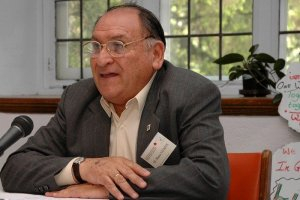 On June 8, 2014, Marco Aurelio Ugarte died peacefully in his home in Cusco, Peru. Founder of the Peruvian branch of ATD Fourth World, he was a sociable man of culture who thrived on going towards others. He continually merged his pride and passion for his Andean culture with his continual drive to meet, know, and take action with people in extreme poverty. Endowed with boundless energy for building this movement to end poverty and engaging others in the endeavor, Ugarte has left an invaluable legacy.

“We have lost a friend, a brother, an elder. Marco was among those who stayed the course, right to the end. Sparing no effort, he held fast until his final days, tirelessly sharing his three passions: his family, his people, and the ATD Fourth World Movement.

Marco’s commitment was rooted in his experiences as a child and youth, that made extreme poverty intolerable to him; he too often witnessed injustice. Convinced of the wealth within his people, he sought to more deeply understand his Andean culture and use it as a lever to upset the weight of extreme poverty. It was in this search that he discovered the neglected, rural community of Cuyo Grande, and from there linked himself to those struggling every day to be recognized in their dignity. As a university professor, he guided his students to embrace this same principle. Outraged by the suffering that extreme poverty creates, he was also courageously involved in the political struggle for social justice in his country.

Marco always sought to take things further; he could never settle for political victories that did nothing to beat back persistent poverty. Meeting Father Joseph Wresinski in 1987 was a pivotal point in his life. From then on, he never stopped promoting Wresinski’s thinking and actions, and providing ways for others to become involved and committed. This led Marco to founding ATD Fourth World in his native Peru.

For Marco, the link between the Andean culture, which values reciprocity, and Wresinski’s philosophy, which recognizes each person as an actor, however deep in poverty one may be, was the cornerstone to build on: In developing ATD Fourth World [in Peru] and allowing Wresinski’s thinking to take root, we made reciprocity the element which centered our relationship with the families and with the community, Marco explained in an article which appeared in the “Fourth World Review” (Revue Quart Monde nº 189.).

The idea of reciprocity is a central aspect which runs through Joseph Wresinski’s entire work. As with the Andean people , is it not his life forged in extreme poverty which taught him from childhood the importance of this concept? …When a person, a community, or a village cannot give back what they have received, life and their world fall into crisis. As a consequence, for the farmers and rural people of Peru, it is important to live in community, because only community can enable them to live in reciprocity—in ayni—meaning to give and receive.

As Volunteer Corps members, Marco and Rosario put their energy and enthusiasm into training others, passing on to new generations what it means to meet, know, and take action with people in extreme poverty. When they moved to Mexico, their first concern was to meet people in the academic world in order to promote the message of coming together for human rights, inscribed on the Commemorative Stone in Honor of the Victims of Extreme Poverty. While in Mexico, Marco also shared his experience with ATD members in the region, as a Regional Delegate for Latin America and the Caribbean.

During his illness, even when he had trouble speaking, Marco managed to find the patience and words to express how important unity was for leading a cause together, that he had always sought this out, even when it was difficult. He recalled how he had brought together a number of leading figures from the Peruvian Left who were quarrelling and that he had managed get them to reconcile with one another. Marco knew that working for peace, harmony, and unity is day to day task. His recollections reminded us of what he’d written during the 2009 Senior Volunteer Corps General Assembly: “The general feeling of members is that today, more than ever, we need a movement which remains that of people in deepest poverty, that has a united Volunteer Corps which also a catalyst for unity, and that is continually seeking out the most excluded whom we don’t know yet.”

Marco Ugarte’s dream was to return to ATD’s international center in Mery-sur-Oise, France, in order to delve into the writings of Fr. Joseph Wresinski. He wanted to offer his people and the Spanish-speaking world Wresinski’s revolutionary thinking, which had given so much meaning to his own life. We are grateful to Marco for everything he has left us: for the strength of his commitment, for what he taught us. Marco knew how to create a space for the voices of those living in extreme poverty to be heard; he spoke several times at the United Nations. He reflected, wrote, and spoke a great deal; his writings and visual and oral testimonies enrich the history we are forging together. We will continue seeking to understand the richness and depth of the endeavors he undertook so passionately and with such a sense of urgency.”

A delegation of ATD Fourth World members joined Marco’s family and other friends in laying him to rest in his native village of Quillabamba in the Cusco Province of Peru.