Central African Republic: We Can Carry on the Fight Against Poverty 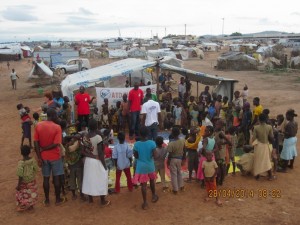 The letters from Central Africa have helped us over recent months to stay close to our friends in Central Africa during the most difficult moments of the crisis being experienced in the country. We remain very moved by their gestures of courage and their feeling for each other even in the middle of the violence that has seen communities destroyed. Little by little, with many false starts, life is getting back to normal, always with the profound hope of a lasting reconciliation. We wanted to share this last letter from the team with you. We will of course stay in touch with those who continue to fight in order to change the lives of those experiencing severe difficulties. We’ll give you news on the ATD Fourth World site on a regular basis.

‘Get together’. In the mouth of ‘papa’ Pierre Tekpa, longstanding friend of ATD Fourth World in Bangui, these words took on unhoped for meaning just a few weeks ago.

Last month, Mr. Tekpa cautiously crossed the threshold of the courtyard, looking from left to right, taking a few steps forward, then slowly getting closer, casting his eyes on every detail, from the flower to the straw roof to the faces to the tidy rows of books. Yes, everything was there, and so was he. And for all of those in courtyard, his appearance was a symbol of the destiny of so many compatriots.

Last year, he left is home to work in his field, around 80km from the capital. The fighting got heavier and intensified when he was deep in the bush and he was unable to get back home or to communicate with anyone for nearly seven months. Meanwhile, in Bangui, the friends of ATD Fourth World often asked: “and ‘papa’ Tekpa?”. There was no answer.

And here he is before us, his small bag under his arm, head bent forward and a smile in the corner of his mouth. “Everyone is fine. And you my friends? And friends from other countries? And friends from such-and-such a neighbourhood in Bangui? Tell me everything!” And he looked at the colourful album of messages of support from all over the world, for men like him, for those, too many of them, who had seen so much suffering.

Mr. Tekpa accepted the invitation to take part in a workshop with 6 young people, with Charles and Joël, his old friends who had met up with him again. And when everyone had had an opportunity to say something, during the workshop break, referring to the next 17 October 2014, the International Day for the Eradication of Poverty, ‘papa’ Tekpa had this idea: “Because we’re still alive, we can meet together, to carry on the fight against poverty.”

The country has seen some important steps taken along the road to peace over recent months. After the civil society forum in Bangui in June and the “Cease fire” meeting in Brazzaville in July, a “Reconciliation” forum is being discussed in the regions and then in the capital. The United Nations is going to increase its presence and resources, which means that prospects of negotiations and a political willingness not to waste time, should lead the country towards general and local elections. Parallel to these steps forward, exams in primary and secondary schools have been held, which sends out a positive signal, even though at a university level, social conflicts are still hampering the smooth running of the whole. Daily life is not exempt from violence, such as the murder of Cameroonian drivers, resulting in the closure of the border, the tragic situation of Central Africans who have fled to Cameroon or Chad and who are very weak and unable to survive. There are many challenges ahead, but people are all looking to the future.

The work done by ATD Fourth World is carried out in line with the crises that occur throughout the country, and every day from the courtyard in Bangui, things start to look a little bit better. The hut is still used and people will always find support, a listening ear, and are able to share news that “weighs heavily on their hearts” and which many have been unable to share for a long time. The learning room helps to give this news a bit more credibility than the rumours that are making the rounds in the various neighbourhoods. The wonderful opportunity to unite nearly 50 ATD workers between May and July 2014 brought an atmosphere back into the ATD house which had been silent in the previous months. In the Walingba and Mbongossoua neighbourhoods, and even near the Mpoko airport where a number of people from the Kokoro have moved, community visits and even libraries have succeeded in getting old and young together. Recently, a Central African delegation of people who run street libraries went to Côte d’Ivoire, joining friends from Burkina Faso in order to give advice to the ’beginners’ from Bouaké.

And so, both in the country and in the life of the Movement, it is possible to take up the phrase of ‘papa’ Tekpa: “Because we are still alive, let’s continue the fight against poverty”.

Which is why with this step, we want you to continue to find out more about what’s happening in Central Africa and all of those who know us through our articles on the site ATD Fourth World international which we hope you’ll visit soon. We dare to ask you to bear witness to what is happening around you so that in the Central African Republic, like everywhere else, the fight against poverty can continue”.

We have tried during these months to live up to the bravery of our friends in Central Africa, by cultivating with them the determination to demonstrate that it is possible to seek and to make gestures of fraternity and peace, even when violence reigns. All of these gestures of resistance, the courage of our friends, of young people, of families, what they have learned by continuing to meet up with each other and to commit themselves to the common cause, are bricks with which we will be able to rebuild the future, when peace returns. Thank you to them, for all that they have shared with us.