Changing Perceptions Through Ownership of Image 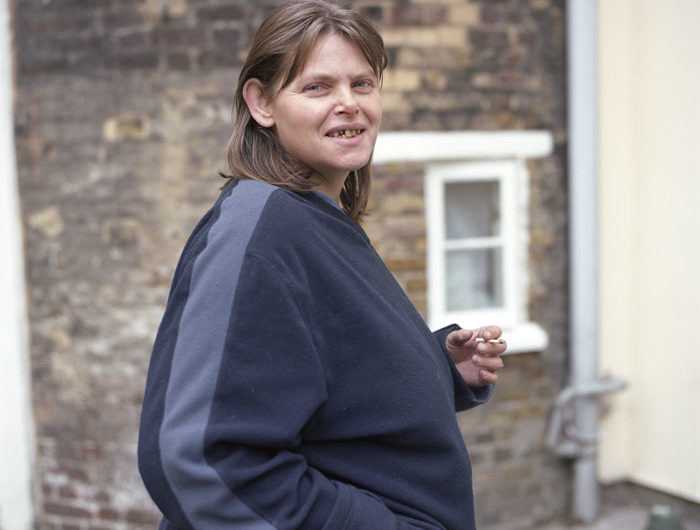 Above: Photo of Amanda Button used in the The Roles We Play project.

When people in poverty are stigmatised and “othered” by harsh stereotypes, how can they raise awareness about this social discrimination and reach out to change attitudes of the general public? ATD Fourth World’s activists in the United Kingdom took on this challenge in a long-term project called “The Roles We Play: Recognising the Contributions of People in Poverty”.

Beginning in 2009, this project eventually included a book and a travelling exhibition. Currently the book authors are engaged in evaluating the participatory methodology they used throughout the project. The results of this evaluation will be made public in a film and a report in late 2018.

One aspect of the evaluation focuses on the importance to people in poverty of having ownership of their own image. ATD activist Amanda Button has now spoken on this topic at several conferences: at Kings College London, the University of Sheffield, the French Lycee Charles de Gaulle of London, and most recently at the Joseph Rowntree Foundation Homestead in York. This is her speech:

“People in poverty are often treated without dignity and respect, which to me is disgraceful. I believe that the media and journalists can blow things out of proportion. They should take the time to get to know people properly. They can often portray an image of them that isn’t true. The media don’t have the right to criticise someone who isn’t as well off or as well educated as them. They may not have had the same struggles in life. The media and journalists should be ashamed of themselves when they create false and negative pictures or images of the lives of people in poverty. People in poverty don’t ask to be treated that way; they do the best with what they’ve got. They deserve the right to be treated equally with dignity and respect. After all, they are human beings just the same as anybody else.

“I was asked to take part in a project called ‘The Roles We Play’. This project gives people a chance to see another side to me. It brings poverty to the public eye in a new way. It brings it to the forefront of people’s minds. I was asked if I would like to have some photos taken as part of the project. During the photo shoots, we had the opportunity to decide where, when, and how our photos would be taken. We also had the choice of picking the final photographs.

“Having ownership over my own image was empowering. It gave me a sense of purpose and control. I liked the process quite a lot because it made me feel like I was in control of how I wanted myself to be portrayed. Doing the pictures in the way that I wanted to do them meant that I could say: ‘This is me’. No one was tampering with my image. This is very rare in life, especially when you are struggling.

“You need somebody that takes the time to listen to what you have to say and that takes on board your views. This helps so that you are able to feel confident. If someone takes on board your feelings, then you are able to ask any questions without fear of being judged or being told: ‘No! We’re going to do the photos this way’. This means that the person with the camera is not just there for their own objective to portray the image that they want; but instead to give an image of the true person. “I wanted to be photographed with a horse. The choice of location was also very important for me; I wanted it to portray my love of being close to nature. Nature holds very positive memories for me. Having the photo of me taken on a horse resonated with a happier time when I had just left school and started working.

“When I look at these pictures of me, what I see is somebody that’s happy and proud of themselves. I feel proud of these photos. But the photos alone cannot explain everything about me; that’s why the words are just as important. I was asked to write a short text to go with my photos. I was also given ownership of what I wanted to say.”

For more about ATD Fourth World’s work in the United Kingdom.