Skip to content
Home > Europe > France > Claire Hedon: “No One Wastes a Penny at ATD.”

Claire Hedon: “No One Wastes a Penny at ATD.” 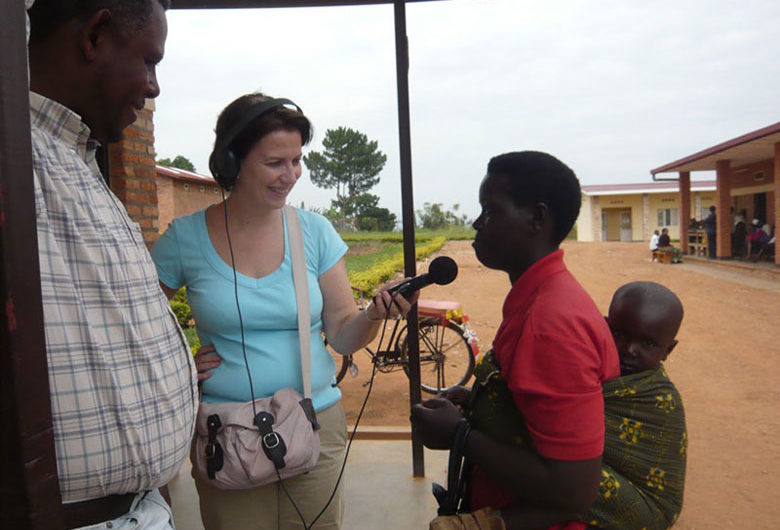 Claire Hedon is a journalist in France who first became an ally of ATD Fourth World in 1993. This article is based on an interview of her conducted in 2016.

Claire Hédon says, “I chose ATD because it encourages everyone to change society. Some charities do work that amounts to ‘managing’ poverty without eradicating it. With ATD, the first thing I was asked to do was rethink the way I had looked at people in poverty and to listen to what they had to say. That was much more powerful than if I had been asked simply to make a donation. None of us are shut into roles of ‘donors’ and ‘beneficiaries.’ When I take part in a meeting with people who live in deep poverty, the goal is for us to think together about broad issues like the environment or education.”

In building her career at Radio France International (RFI), Hédon found a way to make an important contribution to the four million listeners who tuned in to her daily program, “Health Priority,” which she hosted between 2003 and 2017 (last year she became deputy director of features at RFI). Some 90 percent of her listeners lived in Africa.

Every Health Priority show included experts in the studio and listeners calling in. Speaking about this show in 2016, Hédon said: “Topics covered a wide range: childhood malnutrition, enjoying healthy sexuality, coping with trouble in romantic relationships, and mental health facilities in the Democratic Republic of the Congo.” Her goal was “to showcase projects that improve access to health care in Africa.”

In parallel with her professional work, in 1993 Hédon got involved with ATD Fourth World. Hédon’s involvement as an “ally” of people living in poverty led to her becoming president of ATD–France in 2015. She also made a regular financial pledge to support the ATD Volunteer Corps, whose full-time members all receive the same minimal wage regardless of their seniority or responsibilities. This structure without a wage hierarchy reflects ATD’s ethos of opposing inequality and its determination to maximize funding for direct action. This action includes cultural projects, such as Street Libraries and Story Gardens, as well as participatory research and advocacy intended to challenge stereotypes and improve public policies.

Thinking together with people in poverty gave Hédon ideas for her professional work: “In radio journalism, we’re supposed to be quick at getting interviews. But for our programs on health, that can mean that we end up giving more airtime to doctors, who know in advance what they want to say, than to people who are ill and who might need more time to gather their thoughts. ATD taught me that people who are suffering do have a lot to say, but that others rarely know how to listen. So at work now, I ask my team to take more time doing interviews and to withhold judgment.” Diversity is a concern of Hédon’s. “We grow up,” she says, “speaking only to people in our own social class, which raises questions about our education system. At Radio France International, we’re aware that our listeners are mainly in Africa, so we are quite sensitive to cultural diversity. But the question of social diversity is not raised. When we are hiring new journalists, if we employ people from low-income neighbourhoods we can bring diversity to the points of view that shape our coverage. Making even a small effort can really improve our relevance. It’s the same with gender diversity. For example, when we’re reporting on health issues that primarily affect women, such as maternal mortality, it makes sense to hear from female physicians, who are now much more numerous than they were a few years ago.”

When Hédon is the one being interviewed, the word “ethics” comes up often. She pays close attention to the ethics of the pharmaceutical industry. For her broadcasts, to protect the privacy of people who are ill, she advises her team to simply let them speak, asking as few questions as possible.

It is also the consideration of ethics that drew her to ATD. She says, “No one wastes a penny at ATD. I admire the Volunteer Corps for making do with such small financial stipends, while in many other non-profits, the staff earn huge salaries. That’s not only a challenge for their budgets, but it fundamentally changes the staff’s rapport with people in poverty. At ATD, it’s different; whether we are allies donating monthly pledges, Volunteer Corps members living on a shoestring, or people living in poverty, all of us really interact on an equal footing. ATD has a People’s University project where I learn as much as I teach. I do teach people — whether they live in poverty or not — how to prepare to speak publicly, for example. And at the same time, people in poverty teach me so much about the daily realities of their lives, where they put their energy, and what hopes they have for the future. Our common goal is for all people to change so that we no longer have societies with such great inequality.”

Hédon is also struck by the ethical challenges of fundraising for non-profits. She says, “Some groups make appeals that play on emotions without actually making clear how they will spend donations. It’s manipulative. And the public often wants to be generous before knowing how donations will be used. We saw that after the 2004 tsunami in Asia. Many donations were made to groups that didn’t know what they could spend the money on. The question that ATD asks is not, ‘Which country has the greatest need?’ but ‘How can people living in poverty on different continents pool their intelligence to help society progress everywhere?’”

In her work, both as a professional and as an ATD Fourth World ally, Hédon is doing her best to make a meaningful, ethical contribution to that progress.