Skip to content
Home > Europe > France > Climate Change: An Issue That People in Poverty Care About

Climate Change: An Issue That People in Poverty Care About 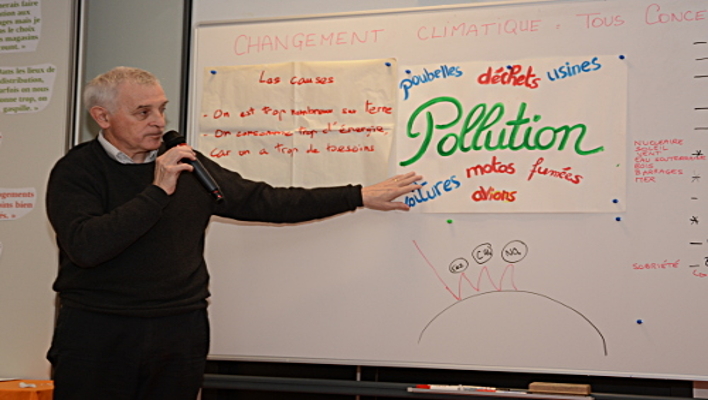 In preparation for the United Nations Conference on Climate Change (COP21) in Paris, the Fourth World People’s University in the Paris region focused on climate change on 14 November. Climate scientist Jean Jouzel was the guest speaker, and the discussion was lively.

The meeting focused on the question: “Climate Change: does it affect everyone?” The answer came quickly. Yes, people in poverty are convinced that climate change most definitely affects everyone — contrary to the belief of some that people in poverty are preoccupied by other priorities. In fact, they are just as concerned as anyone about the world they will be leaving their children. And they also have something to say on this subject.

Forty-seven participants spent their Saturday morning at the national center of ATD Fourth World-France — despite the fact that major terrorist attacks had taken place the night before just a few miles away. In preparing for the session, all the participants had painstakingly studied this difficult subject for the first time.

Those who are most in need are the most exposed

“‘It is the poorest who pollute’ — true or false?” Participants recognized that one could say that people in poverty cause waste or pollution because many live in homes with bad insulation where heat is wasted. Those who have cars own old models that are not fuel-efficient. However, participants ask, do they really have a choice? Often they lack the means to live in a more environmentally sustainable way.

They group also discussed the causes of climate change and the impact of these changes on people in poverty. In thinking about the human causes of greenhouse gasses (such as heating and fossil fuels), they noted the injustice done to the most vulnerable members of society who are the most exposed to damage from climate change because they often live in places with the least protection against the elements and lack health care to protect against the germs that spread as the climate warms. At the same time, they have not caused pollution on the scale that businesses often do.

Jean Jouzel, a member of the COP21 organizing committee, painted a picture of what is to come if nothing is done to reduce global warming: “We can expect more of the scorching heat waves like those of 2003. And with these we can expect both droughts and flooding that will displace the populated areas of the world.” The climatologist was cautious about the chances of COP21 to achieve a world agreement to limit global warming to 2 degrees.

“It starts with us”

Patrice, a participant from the Val d’Oise region, said, “The poorest people in society are the most exposed of all. If global warming continues, they are going to suffer even more; everyone is affected and everyone is able to contribute something that has an impact on the whole.”

Gregoire, age 18, came along with Patrice for his first time joining the People’s University. He said, “We have to act now before it is too late. I try to avoid causing any waste myself. I come from a difficult background, and I go to soup kitchens for my meals. I give back food whenever they serve me too much — it is the least I can do to make sure food is not wasted.” Gregoire appreciated having learned about climate change. He said: “I did not know that illnesses will become more common. Bacteria die in the cold, but when there is no winter, this will not happen.”

Manuela, a participant from the Yvelines neighborhood and a member of the organizing group that prepared this session, told the group: “I want everyone — rich or poor — to make an effort, for example, in changing the way they consume energy. It is up to us to pay attention. We can do simple things like turning the lights off when you leave a room or turning off the burner on the stove when you no longer need it. It is very important to work on this problem of climate change because it starts with us.”