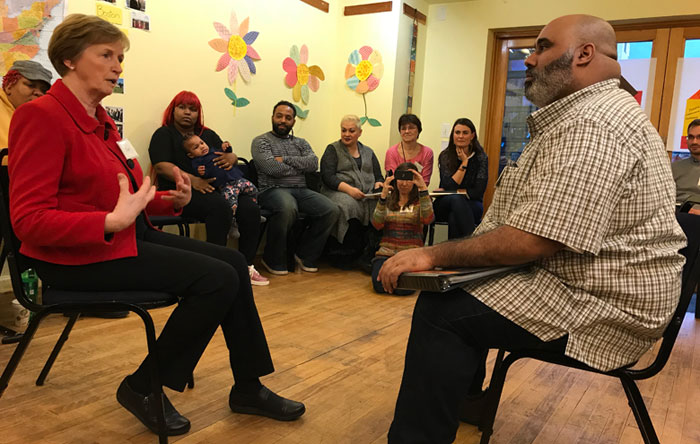 Is more talking really what we need to solve the problem of poverty? A “People’s University” project in New York City demonstrates the answer is yes!

But anyone who has worked in these programs or gotten help from them knows that it’s not that simple. There’s often a disconnect between people who are struggling and the solutions offered. Even poverty experts are often stumped when programs don’t work.

That’s where more talking really can help. The People’s University is a meeting between people in poverty, social workers, program administrators, or elected officials. This sounds straightforward, but it isn’t. Mutual accusations, talking past each other, intimidating power dynamics – there are many obstacles to a genuine exchange. The NYC ATD team had to do some experimenting to overcome these challenges as they restarted the Fourth World People’s University program over the last two years.

ATD started the program in NYC because families they work with wanted to look more closely at various issues and talk with the people who make decisions that affect their lives. Over the last two years, they learned together how to develop a setting where productive conversations can take place.

A seven-person organizing group of ATD Activists, Volunteer Corps members, Allies, and a social work student decided to hold three FWPU’s in the first year on “Supporting Families,” “Back to School,” and “Communication with Elected Officials.” The second year FWPU considered housing issues such as neglected apartment buildings, lack of affordable housing, and landlord-tenant relations, and decided to focus on homelessness.

ATD has had lots of experience building bridges between people marginalized by poverty and others. The organizing group knew it isn’t enough just to invite social workers or elected officials to a meeting and hope for a fruitful dialogue. People can be afraid to speak openly. Topics that are just ideas to some are experiences of deep trauma and humiliation to others. Discussions can erupt into animosity. Highly educated people can talk down to others who have trouble with basic literacy.

Before the FWPU itself, gatherings with people who experience poverty first hand were held. The organizers recorded participants’ comments about a particular topic, and then studied transcripts to learn which questions and activities best stimulated constructive dialogue.

For the FWPU meeting itself, organizers invited guests who could help ATD members deepen their understanding of the chosen topics. They hoped invitees would see the FWPU as an opportunity to learn from the questions and comments of people in poverty. Over the course of two years, a number of representatives from city agencies and non-profits came to the FWPU meetings. For the session on homelessness, a NYC Council Harlem District Leader attended along with someone from the UN working group on homelessness. When the topic was Back to School, a representative from the NYC Department of Youth & Community Development and a school parent-teacher coordinator joined the conversation.

Things didn’t always go as planned. Some of the guests thought they were supposed to show up and deliver a speech. Others seemed too rushed to engage in a dialogue. The organizing group realized that a successful dialogue required more preparation time with the guests in order to understand their motivations and goals — and with participants who live in poverty in order to think through the issues to be discussed.

Additional sessions prior to the FWPU were added in order to clarify what people in poverty were struggling with and hoping for. Participants made posters that were displayed in the FW Center, helping people remember and think about the ideas they had discussed. A family movie night allowed participants to get to know each other better. All of this contributed to a more focused dialogue.

A Forum Theater approach also helped ATD members in poverty think through a particular topic in a safe and engaging way. Small groups developed a story into a scene, and then invited audience members to step in with ideas about how to solve a problem in the story. The goal was not to find a happy ending but to think through ways that the situation in the scene could have gone differently. Putting personal experiences in a Forum Theater scenario gave people some distance on traumatic experiences and served as a safer place to talk about difficult times. When these scenes were presented in the FWPU, attendees from social service or other programs became engaged in finding creative alternatives to frustrating situations. This helped produce a more focused dialogue and avoid mutual recriminations that might have occurred in a more theoretic debate about issues.

One guest from an organization that advocates for homeless veterans explained, “The way I process things usually is, I need a solution now. What this taught me was, I never asked how you [the person in the Forum Theater scene] felt!” Asking how another person feels before thinking about solutions is central to overcoming barriers between people from different backgrounds. The FWPU participants will continue using this effective approach when they take on the issues of Mental Health, Youth, and Social Media in the coming year.