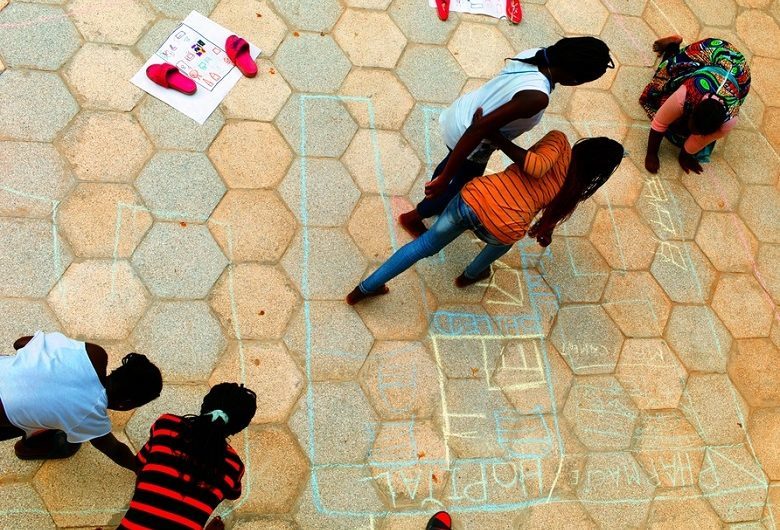 Every two weeks, ATD Fourth World’s team in Dakar, Senegal conducts education activities with teenagers in the Grand-Yoff neighbourhood. Many of these teens live precariously, cramped in makeshift houses. Since ATD Fourth World started its initiative, the teens have become able to do more challenging manual activities. They are also more willing to talk in depth about subjects they discuss together. Recently, the team moved the project location from the street to the courtyard of ATD’s regional satellite office in Liberty 4 because they wanted an environment that allowed more focus and effort.

Together, they started a project related to human rights, the theme of this year’s World Day for Overcoming Poverty on October 17. Human rights are not an easy topic to talk about because the subject can seem pretty abstract. The ATD team approached the discussion with the goal of creating drawings and even a fresco to illustrate the adolescents’ ideas.

The ATD team started by posing a number of questions to the teenagers:

Answering these questions allowed the adolescents to express what they wanted in a dream house. To start, they did this on paper by creating a drawing of their ideal home. They added into their designs elements that would let them live comfortably. The result was a collection of drawings of furnished rooms. None of the teenagers wanted to sleep on the floor, so they put beds in the bedrooms. Most of the houses had a car parked outside. The kitchens had well-organized cupboards. Many added a pool or a soccer field nearby. Over half the teenagers said they would like a henhouse or a vegetable garden. All wanted running water in the shower. One girl drew swings. The oldest teen said to laughter,

“I’m single so I don’t need so many rooms, not even a kitchen or a living room. I’m going to go visiting!” 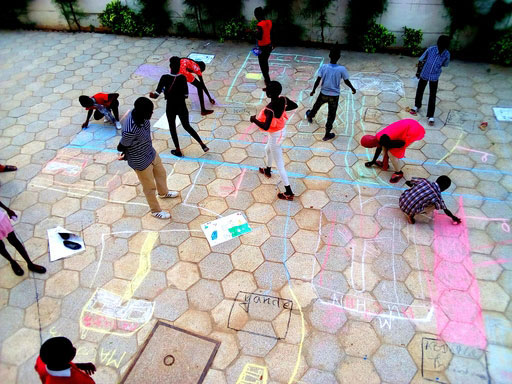 Feeling creative, the teenagers then drew an entire neighbourhood on the ground of the courtyard in which they placed their own dream home. They drew a hospital with a pharmacy next door, a mosque, and a church a bit farther down. The airport was located next to a police station. Roads were laid out for easy access to all the homes and various job locations.

The teenagers had to talk together, listen to different ideas, negotiate, and make compromises. For example, the location of the pharmacy was at issue because one group wanted to place it in the residential area. Those involved with the hospital argued that the pharmacy had to be next door. Why? Because if you get a prescription while in hospital, you need it right away and you cannot run across town to get it. The church and the mosque illustrated the teenagers’ desire to support the faith of the neighbourhood’s inhabitants. They saw school as important so children could get a good education. As they finished up the rough draft of the neighbourhood, they were suddenly dismayed: “We forgot electricity and lamp posts!” they cried.

On the whole, the activities took place in a spirit of solidarity, imagination, open-mindedness, togetherness, and friendship. The teenagers accomplished a project on human rights in a quest for peace. They even considered including “bancs Diakhalé” [Diakhalé benches]. This is a Wolof expression meaning a public space for people who have problems providing for their families’ needs on a daily basis. Fathers with families will meet there to talk about their situation. 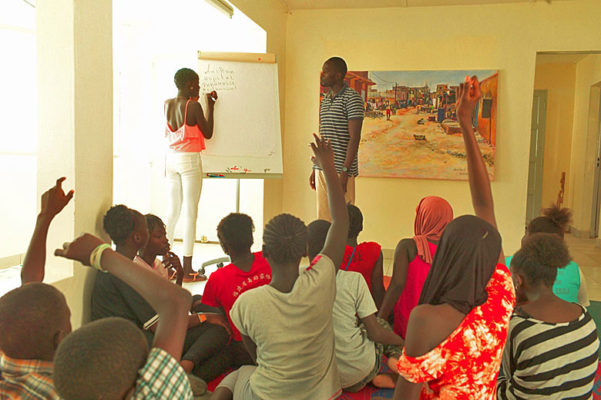 Later on, the “teen neighbourhood” became part of an art exhibit of paintings by French artist Guendoux Bensidhoum. His displayed works had been inspired by his visit to ATD in Senegal and the activities he saw there. The teenagers’ drawings turned out to be the highlight of the exhibit. But they represented more than just drawings. As one teen told visitors, “This is our neighbourhood, Grand-Yoff! Our imaginary neighbourhood!” Hearing this, the visiting Secretary of Foreign Affairs from the Algerian Embassy replied “Ah! The imaginary neighbourhood is good. Now we must strive to make it a reality.”