“They Deserve the Stars” 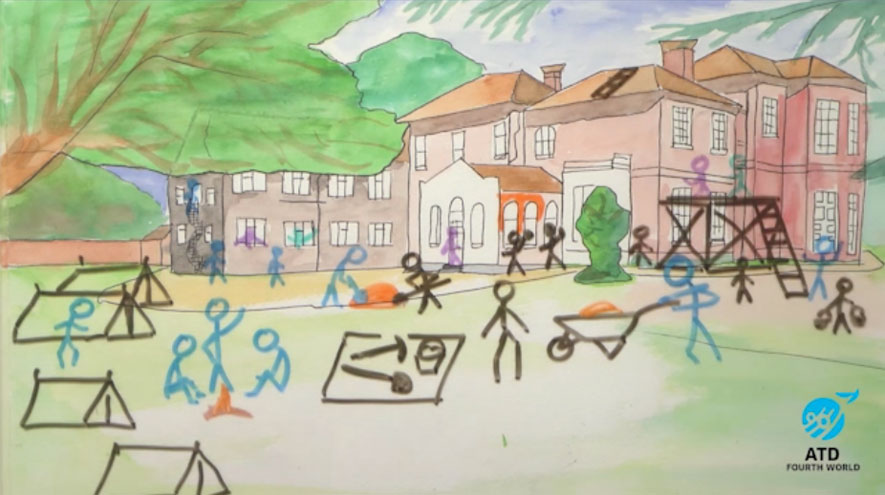 Convincing Families in Poverty That They Can Change Their Destiny

This is the fifth in a series of videos retracing the life of Mary Rabagliati, one of the first volunteers to join Joseph Wresinski in founding what would become ATD Fourth World.

After her return to Europe from the United States, Mary returned to the south of England, where she had grown up, to live at Frimhurst Family House, a residential centre for families in poverty. In this video, Mary explains what it was like for her to live under the same roof with these families:

“Frimhurst is where I felt the most frustrated and angry. We were all under one roof night and day with all of our day-to-day bitchiness. You had nowhere else to go at the end of the day. Once, I was in a terrible mood. On my way out the door for my day off, I shouted at one mother, ‘I hope the house burns down with you in it!’ Of course, the minute the words were out of my mouth, I wanted to sink into the ground with shame. I spent the whole day kicking myself for my temper. It was terribly hard to talk to her again that evening. But in the end, it does people good to see your true self; and my true self has a temper — especially when I’ve slept badly and then I see the children deliberately bashing a bird’s nest or trampling the flower garden. And when I know I’ve behaved badly, perhaps it keeps me from becoming pretentious. At Frimhurst, we live together as human beings, and we all make mistakes, and we spoil things. We volunteers are able to forge a real relationship with the families because we are human, and we do make fools of ourselves at times.”

During her years at Frimhurst, Mary began organising “Fourth World Evenings”, similar to the People’s University sessions that take place in other countries. These were opportunities for people in poverty to talk over major issues in their lives, to question public officials, and to speak out. After ten years at Frimhurst, Mary felt strongly that ATD Fourth World needed a national centre in London:

“Finally, we found a property that could become our national centre. We didn’t have any money, but we were lent money from all sorts of places. Later, we scraped together donations to pay it back bit by bit. Now that we have this house, it is a place where all the hopes and aspirations of the poorest people are engaged. In Frimhurst, it was almost impossible to see anything beyond those few families and their individual crises. Our minds were hemmed in from all sides. We needed another physical place in order to convince society that a new approach is needed to overcome poverty. […] What’s a shame about social welfare services is that no extent of services, however necessary, will provide people with an opportunity to contribute something and to gain a sense of achievement. This is what we did at Frimhurst. Each person realised that they were in fact completely capable of doing something that was useful to other people. That gives them freedom and leads them to become the ones who will reach out to offer encouragement whenever they see someone else suffering.”