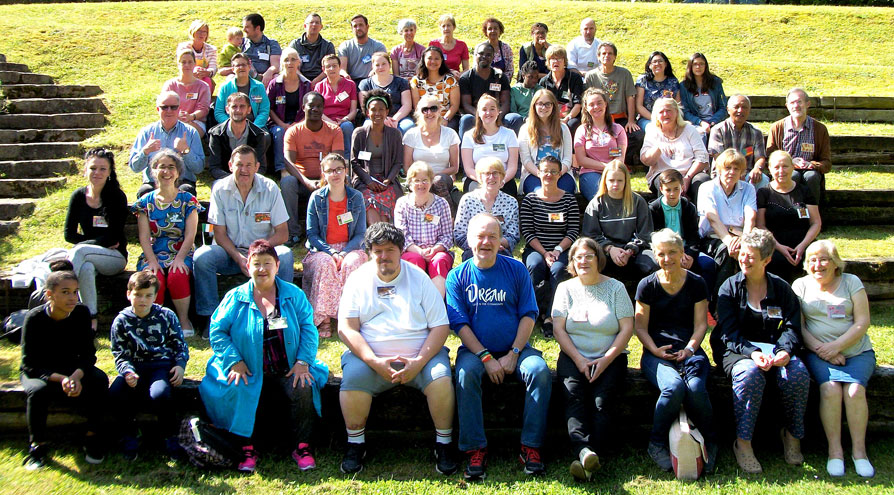 June was a particularly special one for a group of eleven friends and volunteers of ATD Ireland: they journeyed to France in order to visit the International Headquarters of ATD, just outside Paris.

On their first morning, they travelled into Paris. During the visit to the Eiffel Tower, they made friends with some local traders, as well as travellers from South America. Afterwards, they moved across the Seine to view the Human Rights and Poverty Stone on the Trocadero Plaza (with ATD’s flag in tow, of course!). From there the group took the metro to the Champs-Élysees, where they practised the declared song of the trip in the perfect location, with the Arc de Triomphe in the background. Shortly thereafter, the group split: some explored the shops on the Champs-Élysees, while others made their way directly to the Louvre. Finally, after reuniting at the Louvre, everyone stopped to admire the Notre Dame and attempted to spot Quasimodo amongst the bells high above. On returning to Méry-sur-Oise that evening, the group was joined by other ATD members who had begun to arrive from Brest and Bordeaux in our absence.

The next day began with an introductory session. Here, people introduced themselves by using an object, such as a photograph, a t-shirt, or even a child in one case, to explain something about him- or herself. Once all been acquainted, everyone had the chance to visit three different areas within the ATD grounds to learn about the history of the movement, and its founder, Joseph Wresinski: Wresinski’s office, including a number of interesting sculptures and artefacts; the main building, home to a scale model of the Emergency Housing camp where ATD started in Noisy-le-Grand in the 1950s; and the Wall of Courage, completed in 2000.

And the day didn’t stop there. In the afternoon, everyone partook in a variety of creative workshops, such as sessions relating to Madagascar and the Philippines and workshops covering woodwork and robotics.

Afterwards, the participants continued to learn more about each other around the Cedar Tree, planted over 20 years ago. To the base of the tree, individuals added earth from places that were very special to them. While doing so, they shared why the earth they brought was important to them.

The day closed with all three different groups coming together to share an enjoyable, lively, and upbeat musical night, singing songs from everyone’s respective countries.

As Sunday was the last day in France, the day started early, with groups departing Méry-sur-Oise at 9am to visit the Joseph Wresinski International Centre in nearby Baillet-en-France. There, the group heard about research being conducted, discovered some of the photographs from Dublin within the Photo Archives, and saw the underground archives which contained all the physical files that have not yet been digitized, including the room which stored all of the information relating directly to Joseph Wresinski himself – which was extensive!

Afterwards, everyone returned to Méry-sur-Oise for the final meal together, before gathering for an evaluation and feedback meeting. Before the feedback section, there was a few minutes for each group to say something about the work which they are involved in within their areas. The feedback session was filled with positivity. People expressed how much they had enjoyed being together and meeting with the other groups, as well as having the opportunity to learn more about ATD and its founder. However, there was also feedback as it pertained to future recommendations, such as increasing the number of translators and providing opportunities to discuss and exchange knowledge about the current work of the different groups.

The evaluation was followed by the concluding (and perhaps the best) event of the trip – a puppet show which had been prepared by the children over the course of the weekend!

Before leaving, the Irish group had the opportunity to make one last trip to the nearby grave of famous Dutch painter, Vincent Van Gogh.

It was clear from the discussions on the journey home to Dublin that the trip was a great success. Everyone, regardless if they had been involved with the organization for a few months or over a decade, was happy to have had the opportunity to visit the headquarters. The opportunity gave everyone a chance to learn about the history and values of the ATD Movement, and helped put its motivations into perspective. Moreover, meeting with ATD friends and volunteers from different parts of the world gave everyone a greater sense of community – one that exists not only in Dublin, but stretches much further afield.