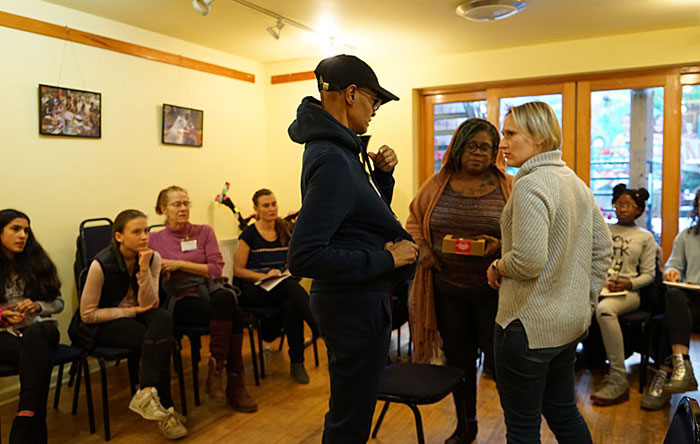 Above: Participants act out a Forum Theater scene at the Fourth World People’s University

On March 2nd 1955, Claudette Colvin, a fifteen year old girl in racially segregated Montgomery Alabama, refused to leave a seat in the bus for a white woman, as black people were expected to do. A month later Rosa Parks started the famous Montgomery bus boycott by doing the very same thing. Now, as then, young people’s enthusiasm, idealism, and bravery can inspire social change.

This year, in New York City, ATD Fourth World wanted to increase involvement of young people from all backgrounds in it’s Fourth World People’s University program. So in March 2019, they devoted an entire Fourth World People’s University to young people. The event offered a safe space for them to talk about their interests and their passion for social justice, fairness and equality. One of the goals was to bring youth into what has been mostly an adult dialogue.

Weeks before the FWPU on young people, ATD Fourth World members of all ages got together in small groups to think about the topic and develop a presentation. They began by asking what hopes and concerns young people (or adults concerned for young people) have. What had people done about these concerns?

Then, members brainstormed scenarios for a Forum Theater* that would present several challenging situations to spark a dialogue with FWPU guests. These included a high school teacher and two of his students. Another guest was a songwriter who had founded a nonprofit working in Ireland and the United States. Focusing on young people, the organization runs projects that explore intergenerational trauma and cultural healing.

At the FWPU meeting, the Forum Theater technique worked well to inspire the audience to participate. When conversation in the scenarios got stuck in no win situations, a facilitator asked for help from the audience. Guests jumped in to play a role–teens, siblings, parents, or authority figures–in order to unstick a conversation and resolve a problem.

One scene portrayed a daughter telling her mother that she had just gotten into a great college. The mother reminds her that she is pregnant. If the college is out of town, she will have to take the baby with her.

In the second scene, a daughter phones her father to ask for help. She is away at college, has lost her job, and now can’t pay her rent.

The third situation presented a brother telling his sister that he just spent $2,000 on four pairs of sneakers.

Finally, the fourth scene presented the owner of a corner store accusing two teenage girls of stealing a can of soda that one of the girls had carried into the store with her.

Each scene provided rich opportunity for the audience to contribute ideas for new solutions to these difficult situations.

All the guests contributed enthusiastically to the Forum Theater scenes with helpful ideas. The high school teacher pointed out whether or not others in each scene listened to the young people involved. The students stated that assumptions in the scenes about race and who is right had made them angry. They also noted the scenarios where others did not listen to young people, did not take them seriously, or sometimes did not even allow them to speak.

The songwriter, who had never taken part in Forum Theater, found it to be a great way to “step outside the box” and be creative. She noted,

“When you’re stuck, the Forum Theater allows you to be creative and imagine different solutions. You can see what can happen and how life can be different when you step out of the box. Just like family, when you have recurring issues you can try them out with different characters, and a solution is possible.”

It was particularly interesting for the young people to play the role of parent and explore thinking from both their own perspective and that of an adult. Overall, the dialogue highlighted how difficult communication can be, and yet how vital it is to speak up, listen to others, hold your ground, and put yourself in another person’s shoes.

*Forum Theater is often used to explore situations of injustice and to engage the audience in finding alternatives to problematic scenarios that are presented in a theater format.