Skip to content
Home > Europe > Spain > “If You Hear Us, Then We Know We Exist”

“If You Hear Us, Then We Know We Exist” 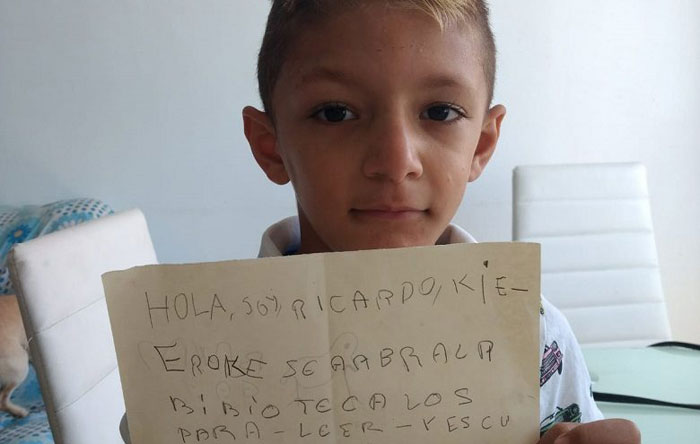 The children’s Tapori group and their families in Seville want their neighbourhood library to be open on Saturdays. You can help them by signing their petition. This year is the 30th anniversary of the Convention on the Rights of the Child. Fundamental to the Convention is the importance of listening to voices of children like these.

Since 2011, ATD Fourth World has been working in the Seville neighbourhood known as “Three Thousand Homes”. It is one of the poorest communities in Spain. Already stigmatized, the neighbourhood becomes even more isolated on weekends and holidays when no organizations are present and nothing is open.

With the permission and support of parents living there, the ATD team started doing a Street Library in this neighbourhood on Saturday mornings. ATD Fourth World also backed other neighbourhood efforts, including struggles for decent housing and education that lives up to families’ expectations. Residents wanted to show that they can be good workers despite living in extreme poverty. So the Fourth World team helped them highlight accomplishments and knowledge that other people may not see.

Inspired by their families’ efforts, a children’s Tapori group in Seville began to improve relations between neighbourhood residents. Enthusiastically, they thought through difficult situations and made suggestions about what to do. Alba, a group supporter and Fourth World ally, explained:

We are determined to find those people who are furthest from employment, access to books or the city centre. In places like this, children are eager to read and learn, and the Street Library helps them discover all sorts of new things. The children are so enthusiastic about having books and seeing what their pages hold. Sometimes they take books one after the other without even finishing them. Often, they invent their own stories based on what they have read. Or they propose games about the illustrations. When children in the San Isidro neighbourhood learned that there was a Tapori group in Madrid, they were excited to start exchanging letters with them. 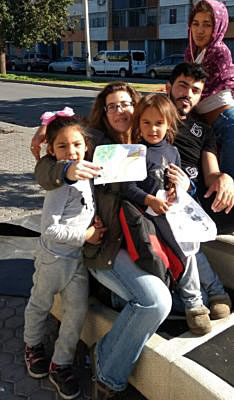 The children in the Seville Tapori group come from the community of Los Verdes. Some participate in the Street Library there; others do not. However, everyone agrees on one thing. On weekends when everything else is closed, they want to be able to go to the municipal library. The children think all the residents would benefit from the library being open too.

Children launch a petition to keep the library open on Saturdays

When the Tapori group met on Saturdays, they found the door to the neighbourhood library locked. For a year they kept gathering near this closed door. Then one day they decided to try another strategy. They started composing a letter. 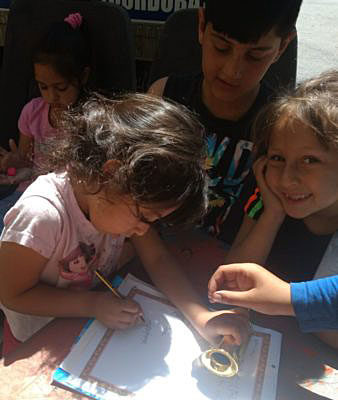 Balancing on a shaky table, the children wrote their letter on used paper. They had no erasers to correct mistakes. But it didn’t matter because they were determined to achieve their goal. Proud of the children’s efforts, their families signed the petition too. So many people signed they wore down the lead in the pencils. Everyone signed, young and old, even if they could not write very well. No one wanted someone else to write their name for them.

Some of the children’s mothers who had created a neighbourhood cooperative called Three Thousand Ideas found other adults who wanted to support the petition. Then they talked to the Andalusian School Principal and Director of Studies. The school newspaper published information about the petition and more Los Verdes’ residents added signatures. Eventually, all the names were sent to the Director of the Southern District of the City Council and to the Commissioner for the Southern Polygon (representation of the Andalusian Parliament in the neighbourhood).

In August, the Tapori group received its first official response. In September, they could meet with representatives of the Institute of Culture and Arts of Seville (ICAS), which manages all the city libraries and theatres.

This meeting has not yet taken place even though authorities say it is on the agenda. However, the Tapori group and their families have not given up. They have created banners and posters and gathered an additional 750 signatures from Seville and the surrounding area.

While these efforts have been challenging, families involved are undaunted. They are adamant that the city should respect the children by listening to their proposal to improve the neighbourhood. As stated in the Convention on the Rights of the Child, children have the right to freedom (Art 13.1) and their opinion on the matters affecting them should be taken into account (Art 12.1). In October the families held a program for World Day for Overcoming Poverty that focused on the 30th anniversary of the Convention on the Rights of the Child.

We hope you will support this initiative by signing and sharing the Seville petition.

Showing support tells these children and their families that they are not alone, that they are stronger today thanks to their own community’s initiative.