Ensuring Protection and Support to Syrian Refugees in Lebanon 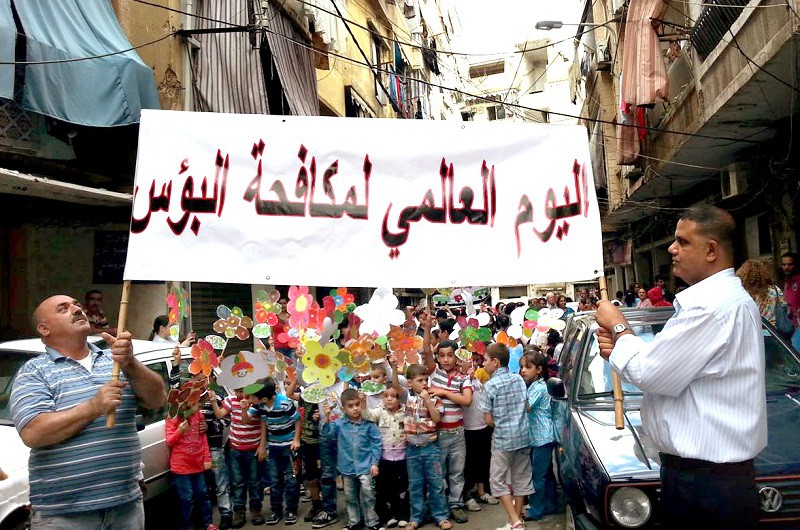 For Lebanon, a country with fewer than five million inhabitants, the rapid influx of more than a million refugees from Syria presents colossal challenges. Whose lives are most powerfully impacted when refugees flood into a country? How does this change their lives? What choices do they make in the name of the right of all people to live in dignity?

Defending the human rights of all is a palpable daily challenge in low-income neighborhoods like Naba’a Bourj Hamoud, a densely populated and particularly diverse district on the edge of Beirut. While the Lebanese civil war increased sectarian segregation in many parts of the country, Naba’a remained home both to Muslims and Christians. Since the war’s end in 1990, buildings have remained pockmarked with bullet holes. Some elderly people in Naba’a have no relatives to care for them and live under bridges or beg to survive. The district’s population has continued to grow, with foreign laborers, migrant workers, and asylum seekers arriving from Egypt, India, Iraq, Jordan, Nigeria, the Philippines, Sri Lanka, Sudan, Syria, and elsewhere.

Many residents of Naba’a have no identity papers. Some cannot obtain papers because their country of origin does not recognize their existence, including children born to parents of different religions in a country that forbids mixed marriage. Depending on their country of origin, they may also feel they are part of a group that others consider dangerous. There are also many women who arrive in Lebanon as domestic workers whose economic contribution to the country is not valued by others and whose employers often treat them badly or abuse them. If these women give birth to children in Lebanon, the children will have no identity papers unless their fathers recognize their paternity. Some of these people whose right to a legal identity is violated say, “No one wants me to exist.”

As the Syrian civil war worsened in January 2013, one of ATD Fourth World’s members in Naba’a wrote:

Naba’a is becoming more Syrian. Rents have increased so much that little by little people can’t afford them and have to move out. The Syrians who arrive are crowding several families into single apartments to be able to afford the rent. Many are Kurdish families who are now our immediate neighbors. They are encouraging one another to come to Beitouna.

Beitouna, “our house,” is a small non-profit center where everyone is welcome, and where the shared priority is looking for ways to reach out to and support people in the most difficult situations. Since 2002 Beitouna has been closely linked to ATD Fourth World through our Forum on Overcoming Extreme Poverty. Members of Beitouna say:

For the 2013 World Day for Overcoming Poverty, on October 17, the message written by members of Beitouna to others around the world began by recalling what it means for the Lebanese people to see so many Syrians arriving:

It’s not easy for anyone. The two countries have had a difficult relationship, especially during the harsh Lebanese civil war. Many Lebanese still resent or distrust Syria. Here at Beitouna, we all feel a duty to be close to the Syrians because Lebanon has been through this: the anguish, the bereavement, being displaced, losing our homes. But there’s also a challenge because everything can drive us to think, “Serves them right, it’s their turn now.” Some of us feel empathy for the suffering of the refugees, while others just can’t. This is the context in which we are searching for what our relationships should be.

Sayed Id, a father who is part of the Beitouna community, has experienced the mistrust that exists in Lebanon and speaks of how he overcame it:

Last month, I heard on the radio that a child in the hospital needed a blood donor. So I went to the hospital to give blood. But I was told, “Foreigners can’t give blood here.” I asked to meet the child’s parents. The father told me to stay, and I was able to give blood after all. I am stronger because I participate in a group with others. Alone, I would do nothing. Here, I listen to others, we meet together to live out what we speak about. This gives real strength that you wouldn’t always have alone.

Elie D. is one of the teenagers who sometimes helps mothers to run the Story Garden. Years ago, his family came from Syria to Lebanon, where they had nowhere to live and had to sleep in a car. In 2010, although Elie’s family members continued to face enormous challenges in their own daily lives, Elie, then 11, was so shocked by news of the devastation of the earthquake in Haiti that he initiated a campaign to send support to Haiti. In a cybercafé, he downloaded photos of the destruction to show his neighbors. Speaking to a group of sixty people, he asked them to imagine themselves as the children in Port-au-Prince playing on the ground when it started to tremble beneath them. Inspired by his concern, many people in Naba’a wrote messages of support or made donations for the people of Haiti. Today, he and other teenagers feel responsible for the younger children at Beitouna. In the summer of 2013, when the adults running the Story Garden saw that the increased numbers of children led to difficulties among some of them, Elie and two other teenagers — Bakair and Yvonne — separated the Story Garden participants into smaller groups by age so they could make sure that no child felt left out, and that everyone would be able to participate fully and complete the activities. For these teenagers and others, Beitouna has been a place where they learn to live peacefully in a diverse community. Jamil, for example, has come to know Elie M. through the Beitouna youth group. Despite their different religions and the religious conflict in their country’s past, Jamil says today, “Elie is like my brother. We’ll always be there for each other, no matter what.”