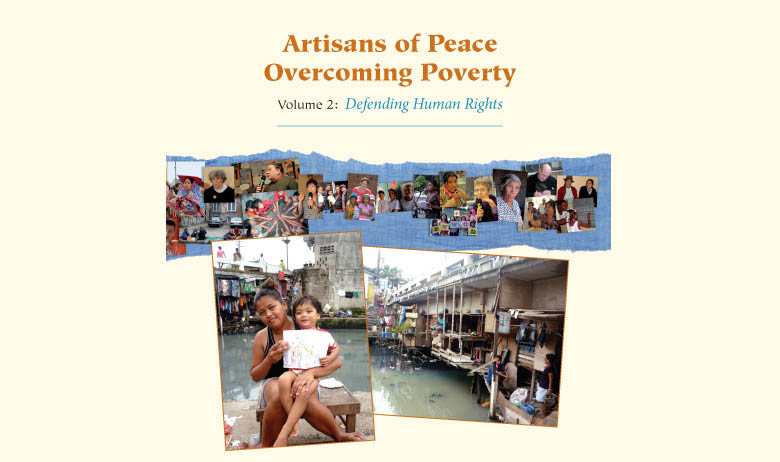 The pdf version of the book is available for download free of charge. Print versions can be ordered at Amazon.com.

This volume of the Artisans of Peace Overcoming Poverty series (which introduces partners in peace-building whose efforts have too often remained unrecognized) tells the stories of people defending human rights in very challenging contexts.

The pdf version of the book is available for download free of charge.

Print versions can be ordered at Amazon.com.

When ATD Fourth World called on the United Nations to adopt Guiding Principles on Human Rights and Extreme Poverty, people in poverty in Guatemala, Thailand, Peru, and elsewhere pitched in to consult with the UN experts writing the text. These principles, adopted in 2012, represent a significant breakthrough in the thinking about poverty. The text recognizes that extreme poverty is both a cause and a consequence of human rights violations — not just the result of economic deprivation. It states that governments have a legal obligation under human rights law to eradicate extreme poverty. Human rights should play a major part in tackling poverty and guiding all policies affecting persons living in poverty. The latter should be recognized as “rights holders” — people who have the same rights as everyone else — and agents of change, able to participate in all stages of developing policies and programs that affect them directly. The text thus establishes an advance over the traditional thinking that tended to consider people in extreme poverty as objects of charity or as passive recipients who deserved a minimum level of humanitarian aid. Building on the concrete experiences of persons living in poverty, the Guiding Principles can help them to formulate claims or complaints based on a better understanding of their rights.

“We must acknowledge that no group of people experiences more violence, harm, segregation, control, or disdain than those living in poverty, as has been made evident by the work carried out by ATD Fourth World. […] Ignoring the situation experienced by those who live in extreme poverty is, in itself, a form of violence and a violation of human rights.”

“While most of us believe we understand what is meant by extreme poverty, our understanding often fails to capture the full extent of violence, social exclusion, discrimination, indignity, and voicelessness suffered by poor people as a daily part of their lives. […] ATD Fourth World has been fighting to ensure universal respect for the dignity and human rights of the very poorest.”

Three excerpts from Volume 2 are available: about Lebanon, about the Philippines, France and about the central focus of ATD’s work.

Find out more about volumes 1 and 3 in the Artisans of Peace series: