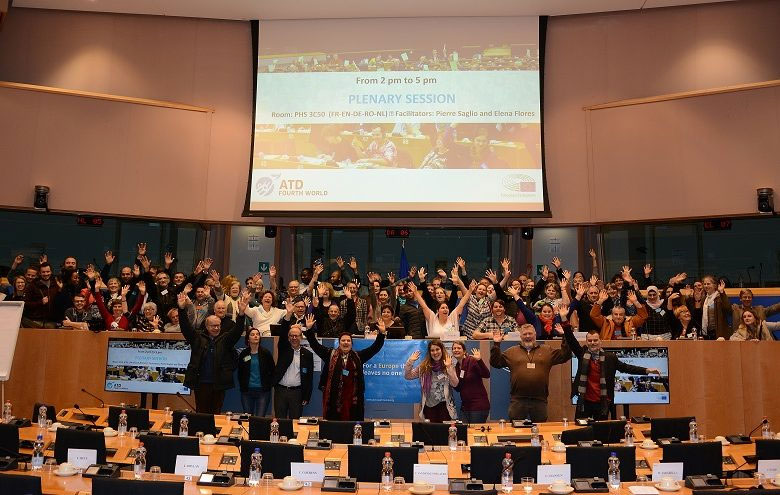 On February 5th and 6th at the European Parliament in Brussels (Belgium), some 100 people from France, Germany, Luxembourg, the United Kingdom, Ireland, Romania, the Netherlands, and Belgium took part in the European Fourth World People’s University to talk about poverty in the EU.

Participants had prepared for the event in People’s University sessions in their home countries. They were eager for European deputies to hear what they had to say, and determined to express their concerns to various European institutions.

On the first day the ATD groups worked together on three issues of citizenship recognition that had come out of preparation efforts in each individual country:

On the morning of February 6, the ATD participants met with a number of European organizations. They worked on proposals that grew out of challenging situations various individuals had experienced. Representatives from the following European networks attended: European Anti-Poverty Network, European Federation of National Organisations Working with the Homeless, COFACE Families Europe, the European Association for the Defense of Human Rights, Caritas Europa, Eurodiaconia, and SMES Europa (Santé Mentale Exclusion Sociale).

Focus on citizenship and documentation

The European Union needs to guarantee the right to legal existence to every person living within its borders. According to local and national administrations, a number of people in Europe have no legal existence. This can be because the person lacks a birth certificate or identity papers. Sometimes government entities do not recognize a person’s address or have not determined a person’s nationality. Without a legal existence people have trouble getting housing, work, and healthcare. Even voting becomes difficult.

People may lack a recognized address for a number of reasons. They may be living on the street or in temporary housing. They may be camping somewhere or live in other precarious housing situations. People without an address include native citizens, European citizens who are part of travelling communities (sometimes called “Roma”), or migrants from other countries.

“Without identity papers, all doors are closed to you,” said Alin, from the Parada Foundation, who has lived on the street.

“Other people do not acknowledge you when you live on the street”, said David from Belgium. “If you have no address, you have no rights.” In his country, David explained, the law says that public aid centres may allow those in need to use the centre as a reference address. In fact, however, the centres often refuse to do this.

Many people talked about being “phantom citizens” of Europe. They experience their lack of existence in the eyes of other people as a kind of violence directed towards them. “There is perpetual suspicion toward people with no papers”, said Jan who for many years did not exist in the eyes of his home country. “In the Netherlands, it’s easy for them to remove you from the population registry. But it’s very difficult to get enrolled. You have to be a criminal to exist!”

“I was ill and I went to the doctor”, said Alin from Romania. “The doctor told me ‘I can’t do anything for you because you don’t have an identity card’. If it had been more serious, would they have let me die?”

“Children without a birth certificate are doomed. And there are more and more of them every year”, said Elena and Rodica from the Centre for Policy for the Roma and Minorities. “In Romania, if you are arrested they will issue you identity papers right away. Why is it more difficult for a mother who just gave birth to fill out these papers to register her child?”

Given government institutions’ lack of accountability and the countless proofs people need in order to establish legal recognition, the ATD group proposed the expression “presumption of existence”.

It became clear that there are a number of laws that do not in fact guarantee fundamental rights. Instead these laws create barriers for people living in poverty. Frequently they  find themselves caught in a vicious circle of trying to provide proofs that remain impossible for them to obtain.

One working group focused on the impact of national and European policies on families living in poverty. These include insurmountable obstacles to finding housing. Sometimes the only employment available to people in poverty is temporary or informal. Generation after generation in one family can experience child placement in foster care or other institutions.

In Germany, the government has sold much of the public housing. Elsewhere in Europe, many available residential buildings remain empty. The ATD delegates from Ireland explained what it is like to live in a temporary shelter. “You can spend 10 years in a shelter waiting for housing, constantly moving from room to room or shelter to shelter. The rooms are too small for visitors and your children are in placement [with social services].”

Child placement was a recurring theme as well. “First the causes of poverty must be addressed, not the consequences…” said French delegates. “The budget allocated for placement [in foster care or institutions] should be diverted to supporting families so that they can get out of poverty.” It is an improvement that families are allowed to have another person accompany them to meetings with child protective services. However, in reality government services often refuse to permit this.

Indicators of poverty and social exclusion in Europe

Several of the ATD participants from France and the United Kingdom have been involved in a two year research effort called “Poverty in All Its Forms”, conducted by ATD Fourth World and Oxford University. The project brings together people living in poverty, professionals such as teachers or social workers, and academic researchers in an effort to identify new dimensions of poverty.

People’s University attendees who were involved in this international study spoke to certain strengths and weaknesses of the European Union’s poverty indicators. In many countries people have begun to recognize that poverty has many factors or is “multidimensional”.  In fact, the European Union’s principal indicator reflects this recognition. It is based on revenue, material deprivation, and participation in the work force. But this multidimensionality is incomplete, stated ATD representatives. It lacks indicators for relationships between people and the systemic nature of poverty. Such indicators would imply addressing the political, economic, and social factors that make it almost impossible to escape poverty. Representatives from Eurostat and the European Commission took part in this conversation, opening new opportunities to explore these topics.

During the plenary session members of parliament* listened to results from workshops involving people who live with poverty every day.

Michel Barnier, Chief Negotiator leading the EU Task Force on Brexit, joined the plenary meeting briefly after attending a high level meeting on Brexit. He apologised for not being able to participate longer. “It is important”, he said, “for me to listen to what you have to say: your anger, your fears, and your difficulties. Listening to the associations supporting you is also critical so that we understand clearly the issues and the needs you have discussed.”

The delegates from different countries were proud to be at the European Parliament expressing their views. The experience encouraged them to continue speaking out so that other people begin to respect them and consider them important partners. In the end, the ATD delegates continue to believe that it is essential for people to recognize the rights and dignity of every human being.

The European Fourth World People’s University is organized in partnership with: