European Institutions: What Role for the Voice of Fourth World Youth? 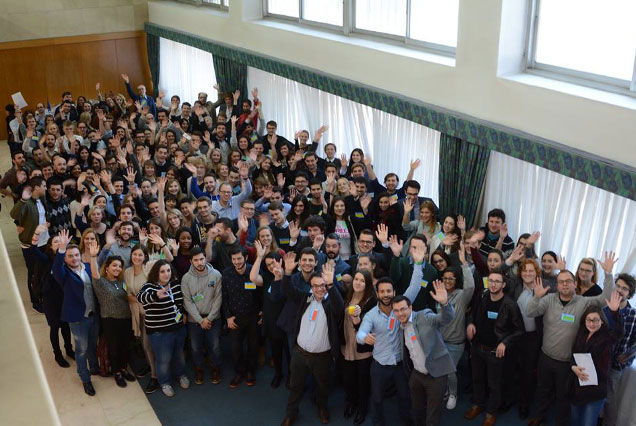 In November 2015, Aurélia Isoz, in Spain, participated for the first time in the European Youth Forum’s general meeting. Aurélia, a member of ATD Fourth World’s full-time Volunteer Corps, is responsible for representing ATD Fourth World at the European Youth Forum (YFJ), which is a network of youth organizations working to promote the participation of young people and to represent their interests in European policy institutions. She writes:

These two days were filled with intense policy activity with youth from privileged backgrounds, many whom had advanced degrees and spoke very good English. Among the 100 YFJ members – from youth associations and national youth councils – very few are in direct contact with young people who lack education. The lives of young people in poverty are almost completely foreign and unknown to the YFJ members I met.

For many years, representatives of ATD have been working so that the voices of young people who live in extreme poverty can be heard within the YFJ. Opportunities that we have are participating and being able to speak in working groups, and contributing to the drafting of resolutions adopted by the YFJ.

For example, in the latest general meeting (COMEM) there was a theme on access to education. The first question was about existing obstacles. Recently I had the chance to talk to Jesus, a Spanish child of 8 who does not go to school, and to his sister Manuela, 21, who has no prospect either to work or go to school. Their parents struggle in order to pay rent and find food to put on the table. By talking about these people I bring them out of the shadows.
There was also a working group with the project of drafting a resolution on discrimination. Our participation helped not only to draw attention to discrimination based on poverty, but also to raise the importance of including those living in extreme poverty into the discussion. Our involvement in these working groups has also allowed us to see that others are receptive to our input and we can create links with other organizations.

ATD Fourth World brings a different perspective to the YFJ, which it seems, has relatively little social-cultural diversity. Most groups represented come from the majority with a few organizations representing minorities. For example, university students seem over-represented. There are some racial minority representatives, an association of deaf young people, Jewish students and an LGBT organization. But there is no association representing young people suffering from disabilities other than deafness, nor is there any representation of Muslim students, young migrants or unemployed youth.

In the end, I also realize that in an organization that is structured as a democracy, the inclusion of minorities isn’t natural. It is the opinion of the majority that is taken into account, and it is the people who are the most comfortable in this type of environment who will be heard.

What is the role of the young people in extreme poverty in an organization like this?
It remains for us to explain our membership in YFJ. It gives us the opportunity to convey the ideas and experiences of young people who know extreme poverty, and who struggle with employment, training, education, and housing. We may be only one voice out of a hundred, but we can be a voice that counts!