So That Everyone Is Able to Celebrate | Isabelle Pypaert Perrin 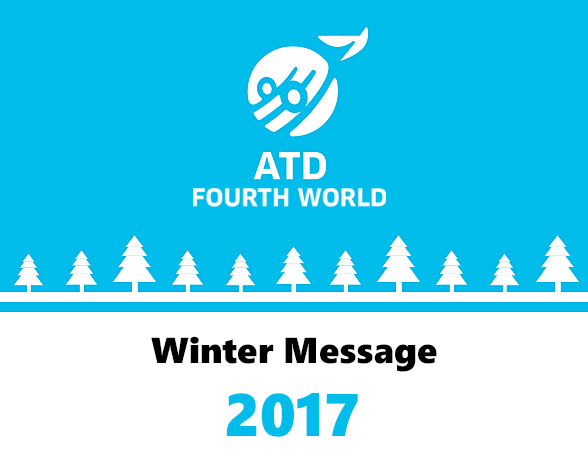 “I was in a group home as a child, and they used to make us sing at Christmas. Can you picture it? Alone, so far from our parents, brothers, and sisters, with our defeated voices, being forced to sing about peace on earth!”

One Christmas Eve, a man named Bob said this to Ronald, an ATD Fourth World volunteer. How many people might recognise themselves in Bob’s situation? Every year, Christmas leaves painful scars on some people, while others enjoy gifts and glittering trees.

Ronald first got to know Bob thirty-nine years ago. He told me:

“Bob is the person who welcomed me when I first came to ATD. I have to admit that I was sometimes quite afraid of Bob. I grew up in the countryside and I had simply come to help out. With Bob, all of a sudden, I found myself staring into the deep abyss of poverty.

“Life was never easy for him. He was always faced with impossible choices and forced into contradictory actions. When he was 50, already worn out and drained, he left his wife and children. He said, ‘The only thing to do was to go into exile.’

“He began living at a camping site, and that’s where I went regularly to visit him, where I’d sit and listen to his words pouring out for hours on end like an inexhaustible, violent cascade. But beneath the flow of words, there were also precious moments when I could see how he cared for others. One of his neighbours told me, ‘He’s often up all night, just walking alone around the campground. And in the morning, I sometimes find surprises from him, like a mint candy, or a little flower tucked into the gate in front of my home.’

“Until Bob’s death, I went to visit him every year at Christmas. It was always tricky, because the holiday could be so painful for him. Christmas reminded him of his own childhood, and also violently confronted him with his feeling of not having been a better father to his own children. But he never learned how to do that — he had no chance to learn how. Once, he showed me photos of his children. He kept the photos hidden because he couldn’t bear to see the look in their eyes that asked, ‘Why, Dad?’

“Bob’s son told me, ‘When I was little, I didn’t understand why, on Christmas morning, we’d find our tree knocked to the floor and the cookies we had baked together floating in a sink full of water. Dad would pretend the cat had done it, but that’s not what happened.’

“Getting to know Bob shook me up and gave me the strength to dare set foot in his world. He gave me the courage to open up and to discover the best of what people in deep poverty have to offer. The days we spent together connected us in a fundamental way. This is at the heart of my commitment to overcoming poverty.”

“We don’t ask you who your parents are or whether you follow a religion or belong to a group. All we say is, ‘There are people calling out to be heard — come to be with them.’”*

To continue to make this possible, we need help from all those who agree that the injustice of extreme poverty must end.

Thank you for your support and your donations.