Skip to content
Home > Indian Ocean > Madagascar > Flooding in Madagascar: Even in Crisis, Keeping Sight of the Future

Flooding in Madagascar: Even in Crisis, Keeping Sight of the Future 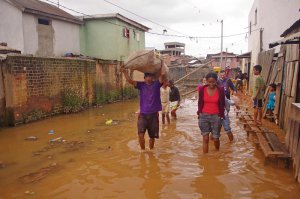 The ATD Fourth World team in Antananarivo wrote to say how members and the country are coping in the face of recent flooding from heavy rains and broken levees:

Since the start of 2015, the country has been plagued by cyclone activity that has wreaked havoc throughout the island. In Toliara, in the south, the second cyclone of the season caused extensive damage to crops, and food shortages are feared. In the capital Antananarivo, families have been coping for two months in an extremely difficult situation of houses being flooded and water stagnating in the courtyards. In the neighborhoods of the Lower Town area, after the collapse of a levee on February 27, rising waters have destroyed many houses: sections of the walls of some houses collapsed; earth brick foundations washed away. The houses of plastic sheeting and cardboard could obviously not hold up against violent rains. Many families have had to evacuate.

Some families have found refuge in public schools open to welcome them. Others are in tents set up by international organizations. The few tents that are available are not all waterproof, so they do not really make life easier. Within families, adults take turns sleeping in their houses in order not to completely abandon their modest property. Also in the places where they have taken shelter, there is no room for the poultry, pigs and other animals they may have.

Families living in persistent poverty have long taught us that in times of crisis we must not lose sight of the future. From the beginning of the floods, families living near the landfill in the Andramiarana area have reiterated to authorities the importance and urgency of building projects over the long term. They want authorities to reflect with them on sustainable ways to cope with the cyclone seasons—in particular, supporting them in obtaining homes with solid foundations. The aid families receive often does not match the reality of their lives: how can we expect people to leave behind their houses, their ways to make a living, and to move away from their community and supportive relationships at the very time when they’re most vulnerable? Families would like that the tents be set up closer to their homes.

Despite their individual difficulties and worries, ATD Fourth World members visit one another in the two districts where ATD works, Antohomadinika and Andramiarana, to support one another and give one another courage. They know that the hardest thing in times likes these is isolation. Faces are marked by fatigue, lack of sleep, and worries of everyday life. Like every day, parents look for ways to make a living and provide for their families’ daily needs. The flooding makes things even more difficult because many of the small, income-generating activities are no longer possible.

Mama Laura, who was evacuated to a classroom with her family, shares her main concern: “School starts again on Monday, and we don’t know where we’ll go. I have water up to my thighs in my house. Then she adds, Thank you for coming to see us; you are the first since Friday. It does us good.” Under the watchful eyes of parents, children make multiplication tables in the sand. Every day, families show their courage and hope, one small gesture after another: sharing within the little they have with relatives and neighbors, or showing concern for the elderly and the sick. Prayer also holds an important place.

Young people involved with ATD Fourth World began cleaning canals this week in link with neighborhood associations of Antohomadinika. The unsanitary conditions and potential diseases—particularly skin and respiratory problems—call for the mobilization of the entire neighborhood to make life more livable.

As a team, we’ve increased our presence in neighborhoods in order to visit families more often. What’s important for families right now is to not be forgotten. Dialogue has been established with the representatives of the “Fokontany” (city council districts) who themselves are seeking aid, as well as with the Malagasy Bureau for Risk and Disaster Preparedness. We’re investing energy to ensure that the most vulnerable benefit from what is put in place, so that no one is left out.

Meanwhile, spontaneous demonstrations took place last week in other parts of the city, with people expressing, “We can’t wait anymore!” for the State to undertake a major project in which the population is taken into account and neighborhoods rehabilitated. The situation facing the country affects the entire population. The loss of rice fields and other crops means the threat of food shortages. The rising price of drinking water at the communal taps weighs heavily on families’ budgets. Those who have already been living in deeply precarious situations are now even more vulnerable.

As a team, we continue our regular creative, knowledge-sharing activities, and they remain time of peace and joy in the neighborhoods. “One of our plans now is to show children the benefits of water,” recounts one of our volunteers, “and that way bring a positive aspect amidst the floods. So, last week we had the kids plant beans in plastic cups. At the next session, they decorated the cups with paint. One of the residents kept the bean cups at his place, and the other day we went with the children to pick them up. What a joy to see the children with big smiles and shining eyes, arms filled with their bright plastic cups with bean spouted 5 to 10 cm out of the ground! A glimmer of hope in this chaos. It really brightened the day! Not all the children were able to attend, however, because of the day-to-day needs and emergencies.”

Now more than ever, the words of encouragement and friendship that come from afar are a source of strength for us all. We really appreciate them.