The Simple Pleasure of Singing 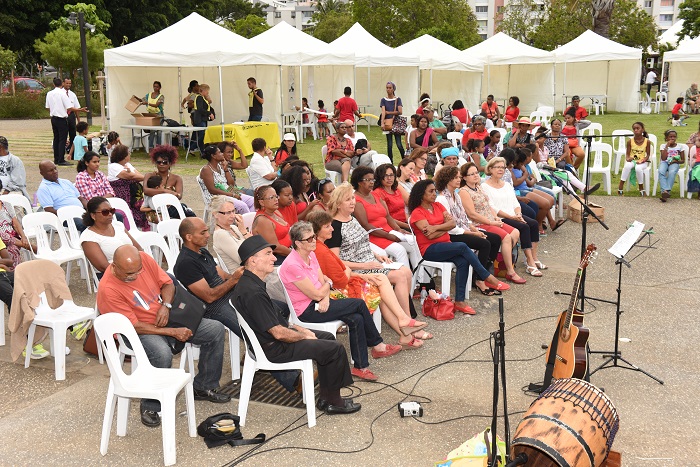 Since the summer of 2014, families from the Plateau-Cailloux district on Reunion Island have been getting together every Wednesday afternoon to sing. On those days the community center’s halls ring with the laughter and singing of participants, happy to have a break from challenging daily lives and to open up and relax through singing and meeting up with others. Reunion Island folk songs in Creole, full of wisdom and timeless lyrics, are the group’s favorites.

The Reunion Island CANTARE Chorale isn’t just your run of the mill choir. Since early in 2014 it’s the place where people who never thought they could sing with others meet with choir members who want to open up to other realities in life.

The original goal partnering with Cantaré Chorale was to allow children aged 8 to 16 sing on October 17, International Day for the Eradication of Poverty, as well as on other occasions. Children from the Grande Ravine and Chaloupe Saint Leu districts, along with their parents, were the first participants in this adventure. During Family Day, held on May 8, 2014, the choir sang so well that many other families wanted to participate. And that’s how the adventure spread to Plateau-Cailloux, this time with parents who saw a true opportunity not to be missed.

Nathalie Grondin, an activist with ATD Fourth World recounted: “When they told me there was a choir, I said to myself that this would be a big plus for the families. This allows them to experience something other than the worries of their daily lives. Not everyone has such an opportunity to sing in a choir.”

The rehearsals, originally planned every two weeks, became weekly in order to ensure the performance the choir had planned for the October commemoration of the 25th anniversary of Reunion Island’s replica of the Commemorative Stone in Honor of the Victims of Extreme Poverty.

“It was really moving to hear everyone singing together,” added Nathalie Gendre, ATD Fourth World’s Indian Ocean Regional delegate. “Several people asked who this choir was. I remember how proud everyone was, whether it was mothers who were singing for the first time, or longtime choir members who wanted to experience this commemoration for the October 17 World Day to Overcome Poverty. The choir was really high quality. You could feel their joy just by looking at them, the pleasure they had in simply singing together.”

This wonderful adventure would not have been possible without the assistance of Mr. Tavan, the choir director who has supported and promoted this project. Over the months of rehearsals, close links formed amongst the families, Mr. Tavan, and the guitar player Mr. Houry. With the move to the Plateau-Cailloux neighborhood, the choir decided to continue to open up to more children.

Mr. Tavan’s and Mr. Houry’s humility and open minds really impacted families. One of the highlights of this partnership is seeing Mr. Houry taking time give a few tips to a father who likes to play the guitar. Each person discovers that he or she can learn with others and wants to continue to experience these moments of sharing songs and music.

Sabrina summed up the feeling this way: “I missed a few rehearsals before October 28, so I did everything possible to get back into the group. For me it was really moving; I had tears in my eyes. After that, I was happy to be back and it’s a great pleasure for me.”

Françoise, who almost never misses a rehearsal, reiterated why she’s involved: “It’s because I meet people I didn’t know, and Mr. Tavan and Mr. Houry made us feel right at home, and made us want to continue.”

Marie-Bernadette, a full-time ATD Fourth World Volunteer Corps member, loves these festive moments: “One of the mothers said to me: ‘I went with my children to my mom’s and when we got there, my daughter said, ‘Grandma, we learned a song at choir – Madina – do you know it?’ And she didn’t remember it. So my daughter started to sing it to her. We all ended up singing together! My mother was nostalgic, and I was really moved.’ And another mother said to us: ‘When I go to choir practice, I come in loaded down with my concerns, and when I go back home, I feel much lighter, with more courage for tackling them.’” For Marie-Bernadette, promoting this choir meets ATD Fourth World’s priority to support the commitments of people in these districts who must struggle on a daily basis, not just for themselves, but also for others. It responds to our common ambition to “reach those whose contribution is missing.”