Gaetane and Her Struggle for Dignity 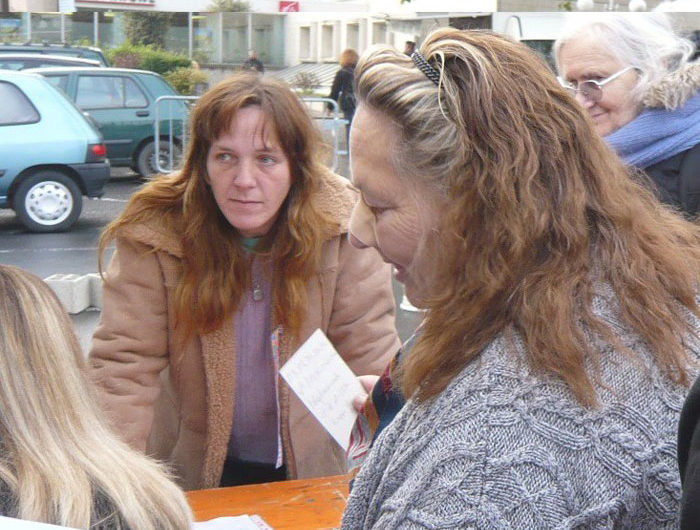 One woman’s struggle for housing leads to a remarkable victory against discrimination towards people in poverty.

By a group of ATD Fourth World Activists and Partners (France)

Friends from ATD Fourth World invited Gaetane and her family to the Christmas party in 2004. After that, she participated in our local group’s activities for some time. Finally, when she trusted us, she told us about her housing difficulties. Looking back later she said:

“I tried to see the mayor twice, but had no luck. The first time, I went for advice on how to get help from social services. But they said the Mayor couldn’t help me. The second time, I went to see him during an open meeting, but he refused to recognize me. He even threatened me if I insisted on meeting with him!

I already had two children placed in foster care. I didn’t want them to take my youngest.

“Then I met ATD Fourth World. I went back to see the Mayor accompanied by someone from ATD who came from a different social class. As if by magic, I was well received. Which just goes to show — shouldn’t a mayor be unbiased and receive everyone?”

The Mayor wanted to place Gaetane in a public housing centre. She had always refused because it would mean breaking up her family even more. So she completed the paperwork needed to find a home through a private landlord.

Gaetane then took part in ATD “Merging Knowledge”* meetings to discuss foster care with professionals. This allowed her to consider her Non-Institutional Educational Action (AEMO)** adviser in a different light.

As a result, Gaetane felt stronger and more confident. She continued activist work with ATD Fourth World and ran a local group with another person.

Along with other people who were discriminated against because of their poverty, Gaetane testified before the High Authority to Combat Discrimination and Promote Equality (HALDE) in 2014. She described her experience trying to get housing. Because of their efforts to speak up, there was an enquiry that showed there had indeed been discrimination in her case.

On June 14, 2016, after a long battle, discrimination based on social class was officially recognized and banned as the 21st criteria for discrimination forbidden by law in France.

This occurred thanks in part to Gaetane’s testimony before HALDE.

Discrimination on the basis of poverty now even has a name: “povertyphobia”. The name was chosen by ATD Fourth World and announced on October 17, 2016, World Day for Overcoming Poverty.

Sadly, Gaetane is no longer with us. But her courage inspires us to move forward.

*‘Merging Knowledge’ is a dynamic that enables people in poverty to communicate knowledge gained from their life experiences to professionals such as social workers, researchers, or other recognized experts. The combination of different types of knowledge results in more a more comprehensive and inclusive approach to understanding poverty and working to overcome it.

** Non-Institutional Educational Action (AEMO) is a civil judiciary action (ordered by the Juvenile Court Judge) for the benefit of one or more children from the same family. It consists of the intervention of a social worker in the home for a variable length of time.