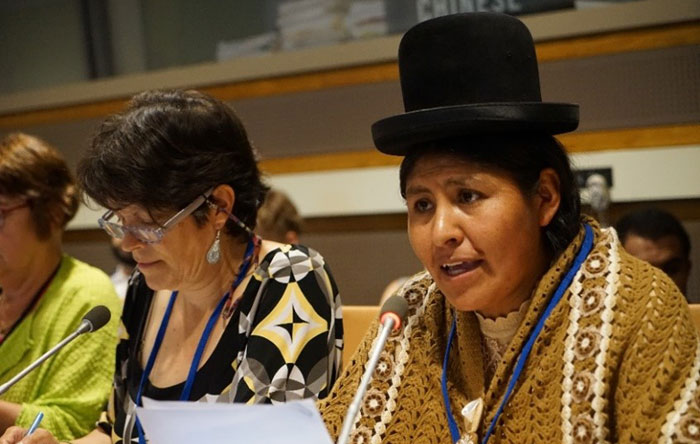 “Empowering people and ensuring inclusiveness and equality” was the theme of the 2019 High-level Political Forum (HLPF) at the United Nations in New York last July. Organized by the UN Economic and Social Council (ECOSOC), the event served as a global platform for reviewing progress on implementing Agenda 2030 and its Sustainable Development Goals (SDGs). Member States talked about their efforts to leave no one behind, but also to prioritize the people who are furthest behind.

An ATD Fourth World delegation that included members who live in poverty took part in the HLPF. The delegation attended high-level meetings, spoke on panels, and organized a side event and training workshop. In all sessions, they asserted to UN Member States that people living in poverty should be included in the design, implementation and evaluation of policies that directly affect their lives. In particular, they emphasized the practical steps needed to enable people who live in poverty to bring their voices and experiences to all aspects of Agenda 2030 and the SDG’s.

Before the HLPF opened, the ATD Fourth World delegation met with Ambassador Inga Rhonda King, President of ECOSOC and Chair of the event. Delegates delivered in person their principal message: involving people in poverty is critical to the goals of leaving no one behind and making both policies and institutions more effective.

Stigmatization, social maltreatment, and disempowerment were topics the delegation also brought to the attention of Ambassador King. “When you live in poverty, you are not free to make your own decisions”, said Roxana Petrona Quispe Yujra, an ATD activist from Bolivia. “We don’t claim our right to be respected and we fear being evicted. And because of this fear, we find ourselves unable to do anything, feeling helpless. [Most people judge us and] think that laziness is the cause of our poverty.”

Impressed by her meeting with the ATD delegation, Ambassador King later quoted an ATD Fourth World activist  at the opening panel of the HLPF.

HLPF side event on participatory approaches

On the first day of the HLPF, ATD Fourth World co-hosted its own side event, “Unleashing the Transformative Potential of the 2030 Agenda through Participatory Approaches”. Academics, practitioners, and people with direct experience of poverty all described how collaborating on a recent research project, Hidden Dimensions of Poverty, had reoriented their perspective in significant ways. Small group discussions addressed accountability and monitoring, as well as conditions needed for empowerment and its impact on policy-making. For information on the breakout session, including keynote speakers, download the report of the side event.

The “Participatory and inclusive tools to build capacities in leaving no one behind” workshop featured ATD Fourth World and Oxford University presenting the Merging Knowledge methodology that they used in the multi-year Hidden Dimensions of Poverty project which engaged people in poverty as co-researchers. Roxana Petrona Quispe Yujra, an activist with direct experience of poverty and Sophie Boyer, ATD Volunteer Corps member in Bolivia, explained how that country had enabled all co-researchers to work together on an equal footing.

For more information about the training workshop watch the full video recording and see the presentations of all speakers.

Speaking at the final session of the HLPF, ATD Director General Isabelle Pypaert Perrin highlighted how important it is for all stakeholders, especially people living in poverty, to be involved in designing, implementing, and evaluating policies. It is critical, she said, for people in poverty to be involved in developing a more accurate understanding of the issue that can lead to real change. Ms Pypaert Perrin noted a question that a woman living in poverty named Madame Louise had once asked her. “We work so hard”, Madame Louise told her. “Will our children reap the fruits of our struggle or will they die in the same poverty as us?”

Ms Perrin also pointed out that, despite billions spent on aid, people in poverty often struggle alone, without any outside support. Noting that the effects of climate-related events fall disproportionately on people in poverty, Ms. Perrin asserted that effective climate policies should be developed with people who suffer the most from them. The most effective policies and projects, she insisted, will be those rooted in what people in poverty are already doing for themselves.

ATD Fourth World is currently discussing plans for future collaboration with ECOSOC and UN agencies such as UNDP, including participation at the SDG Summit in September 2019.