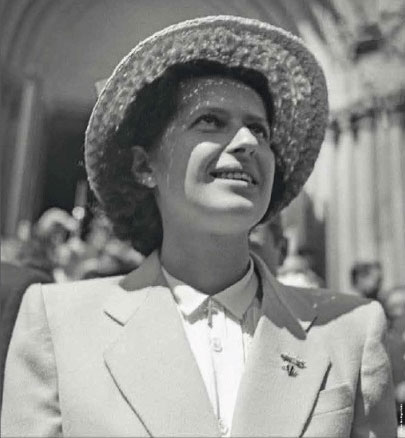 A new biography of Genevieve de Gaulle, The General’s Niece: the Little Known De Gaulle Who Fought to Free Occupied France, was recently published in the United States. Several chapters are based on interviews with members of ATD Fourth World’s Volunteer Corps who worked closely with this remarkable woman during the many years she supported ATD’s struggle against extreme poverty in France and around the world. Cate Chisholm, an intern with ATD in the United States, reviewed the book.

As the President of ATD from 1964 to 1998, Geneviève de Gaulle undeniably dedicated her life to help the suffering and alleviate poverty. But her preceding life which lead her to ATD is also noteworthy, revealing how even as a young woman, she was committed to both her country, her people, and the world, without any desire for personal gain. In June 2017, Paige Bower released the first, and long overdue, English-language biography of Geneviève de Gaulle – The General’s Niece: the Little Known De Gaulle Who Fought to Free Occupied France.

Although her last name automatically causes some recognition, due to her renowned uncle, Charles de Gaulle, the founder of the Fifth Republic and former President of France, little is known about Geneviève outside of France, making this biography particularly significant. Not only did she play an integral part in the French Resistance, combating the Nazi agenda in France, but she also supported and aided in healing France and World War II survivors globally after the war had ended. Geneviève used her proximity to the distinguished leader, Charles de Gaulle, to her advantage, but never failed to show how down to earth she remained despite her privilege.

Geneviève herself went through years of extreme suffering in the Northern Germany women’s concentration camp, Ravensbrück, from which tragedies are detailed throughout the book. However, even then, her resilience and commitment to helping all those in need never failed to cease. After being released she immediately went to work to help other deportees restart their lives, as well as to prosecute SS officers. It could even be argued that her devotion to helping the less fortunate increased after being interned in Ravensbrück, as afterwards, she knew exactly what it was like to feel helpless, and never turned down a soul who was in need of help.

After meeting Father Joseph Wresinski through a friend, Geneviève was convinced to visit Noisy-le-Grand, the homeless camp in need where ATD originally began its journey. It was immediately apparent to her that the people of Noisy-le-Grand needed help, and she noted that the unfortunate conditions that the townspeople lived in were not much better than her own when in Ravensbrück. She decided to quit her job with ADIR (Association Nationale des Anciennes Déportées et Internées de la Résistance), which focused on supporting affected women rebuild their lives after the war. She also sacrificed much time with her four children to work for ATD. Years later, after Geneviève had become a prominent figure in ATD, she was nominated to become President. Serving as President, she used her knowledge and influence to advance ATD’s mission, along with Father Joseph Wresinski, bringing all together in dignity to overcome poverty. Even after she lost her partner and co-leader, Father Joseph, and her husband, Bernard Anthonioz, she persevered, vowing to truly dedicate her life to ATD.

While ATD has expanded and changed greatly since Geneviève was president, our morals and values remain the same; Geneviève’s resilience can inspire us all to continue the fight to create a more inclusive world which is free from discrimination and prejudice.