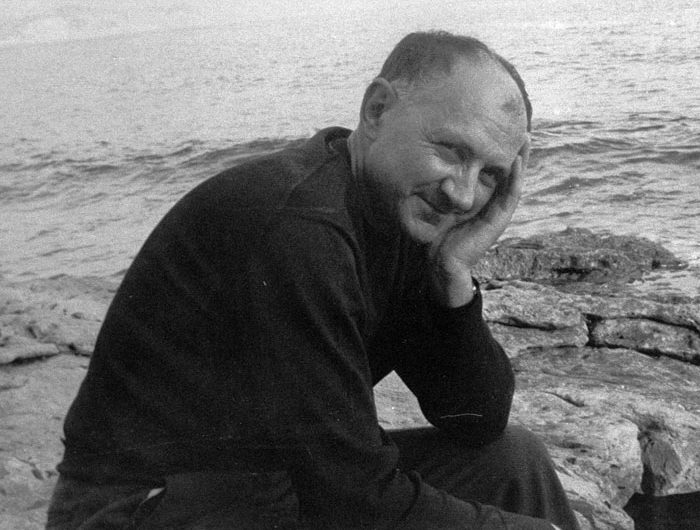 February 12, 2017 – Joseph Wresinski, founder of ATD Fourth World, was born 100 years ago today. ATD is launching the 2017 STOP Poverty campaign on this day to mobilize people around the world to join its efforts to overcome poverty. The campaign begins with events in Angers, France, where Wresinski was born; at the United Nations headquarters in New York City; and in many other places around the world.

Wresinski had a deep empathy for families in poverty because he was born into an immigrant family in a poor neighbourhood. In the excerpt below he talks about the difficulties he experienced as a young boy, and how living and working as a priest in a homeless camp helped him finally understand his troubled parents.

The violence and scorn Wresinski experienced as a child gave him a keen insight into what people in impoverished communities need and want. A man of extraordinary determination and tenacity, Wresinski fought his whole life to defend people in poverty from the charity that humiliated them. Wresinski’s genius was seeing that we must listen to people in poverty, whom he called “my people”, and follow their lead. At the end of this article is information on how to join ATD’s work and become involved in the 2017 STOP Poverty Campaign.

My earliest childhood memories go back to a long hospital ward and my mother shouting at the nun who was supervising us. As a young boy, I suffered from rickets, and had been hospitalized to have my legs straightened.

That day, I had told my mother that the nun had not let me have my parcel brought the previous Sunday. My mother, who obviously had tried hard to collect together a few treats, lost her temper. Immediately she wrenched me from the hands of the nuns and brought me back home.

My legs have remained bowed ever since and throughout my childhood and, especially as a teenager, I was subjected to the ridicule and teasing brought on by this handicap, with the added embarrassment of a slight limp.

Thus, my first memory of contact with other people was that of injustice and prejudice which were to leave their mark for the rest of my life. This would probably also explain my intolerance of runny noses, of crooked legs and of these young bodies already marred which surround me now in emergency housing, in the hovels and in the slums.

My mother shouting at the nun had not surprised me. I was used to shouting. At home, my father shouted all the time. He would beat my older brother much to my mother’s despair, as it was always his head that bore the brunt. He was cursing my mother and we lived continually in fear.

It was only much later, when I was a man, sharing the life of other men like him and of other families like our own, that I understood that my father was a humiliated man. He suffered because he felt he had failed in life, he was ashamed of not being able to give his family security and happiness.

This is the real evil consequence of extreme poverty. A person cannot live such a humiliated life without reacting. The poor react in the same violent way, nowadays as well as in the past.

Wresinski’s saw clearly that respect is the first step in any effective effort to overcome poverty. ATD’s work around the world reflects this insight. Show your support by joining our Call to Action and adding your picture to the Worldwide Online Photo Mosaic that is expanding every day until October 17, 2017, the 30th anniversary of World Day for Overcoming Poverty.

Wresinski’s story, “A young boy caught in the vicious circle of violence”, is from The Poor Are The Church; A Conversation with Fr. Joseph Wresinski, Interviews with Gilles Anouil, first published in French in 1970.