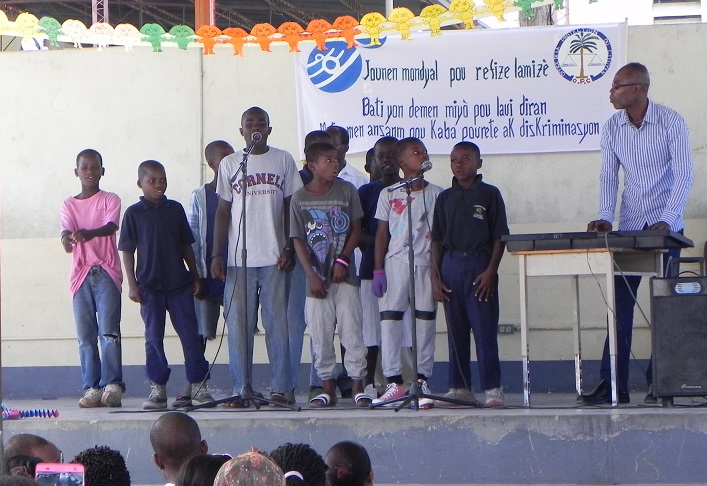 Since 2002, ATD Fourth World has collaborated with LAKOU Don Bosco, a charity organization that offers services to children living in the streets. Every week, volunteers from ATD Fourth World facilitate cultural activities for a Street Library in the LAKOU center. It is also in this center that the two groups host events for the World Day for Overcoming Poverty with the children playing an active role.

For the 2015 World Day for Overcoming Poverty, observed on October 16, the children’s entrance onstage immediately hushed the crowd. The public was eager to hear the children sing a song they had written, inspired by their own life experiences. Here is an English-language excerpt of the song (see the original Haitian Creole version).

I know what I must do, every morning
When I get up
I must go to the fields
To take care of the cow
And go collect wood
And go collect water
But my empty stomach
Tugs at me in hunger
At night, I go to bed without supper
I begin calling for God
I begin crying
You see, I am forced to go into the streets
To look for a way to survive.

Mr. Billy is both a musician and an educator at LAKOU. He formed a small band for children, so that they can make themselves known to society. “The children who wrote this song were proud to finally have a way to speak about themselves,” he explains. “This song is them — it’s their self-portrait. They were happy to participate in this important event — they don’t often get to meet people in a positive way. They want to show others who they really were. By performing this song, children wanted to make their identity known. They were really inspired by this purpose and took care to dress up well on the big day.”

Every child living in the street has their own story, whether they come from the countryside or from impoverished urban neighborhoods. Living conditions may be especially bad at home; when children cannot get enough to eat every day, they often wind up in the streets. They look around to find ways to make ends meet from day to day: carrying packages, wiping down cars during traffic, cleaning cooking pots in the marketplace, waxing shoes, hollering to invite passersby to come ride in a rickety vehicle, or even scavenging table scraps wherever street vendors have been cooking food. They do all of this in spite of the danger and violence that come hand-in-hand with street life.

These are the harsh realities of the children at LAKOU who enjoy participating in cultural activities once a week. Life in the streets does not prevent them from dreaming and hoping that they may achieve a better life one day.