Skip to content
Home > Latin America and the Caribbean > Haiti > Health Coverage For People In Poverty: An Experience In Port-Au-Prince (Haiti)

Health Coverage For People In Poverty: An Experience In Port-Au-Prince (Haiti) 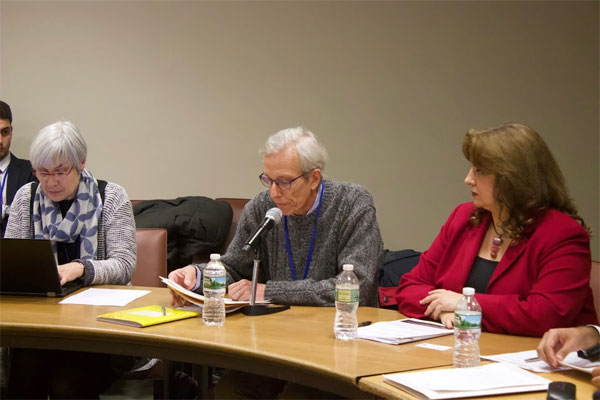 Adapted from a speech at the fifty-sixth Session of the Commission for Social Development at the United Nations in New York: side-event. Social protection floors as key tools for eradicating poverty: Best practices and strategies for the future.

The project we are presenting here began in the mid-1990’s in Port au-Prince (Haiti). Two NGOs (SOE and ATD Fourth World) decided to build up a partnership. They were disturbed by the widespread poverty and lack of access to health care among the people living in a shanty town. They initiated a project aimed at guaranteeing access to essential healthcare. In 2016, 918 families were beneficiaries of this project, including almost four thousand individuals of whom about 700 (18 percent) were children under five years of age.

Thanks to a “health insurance card”, families in deep poverty are specifically targeted for inclusion to the project. The card gives them access to a center (le Centre de Santé Saint-Michel) that provides primary health care including vaccinations, family planning, and care for tuberculosis and HIV/AIDS. Card-users can also obtain second-line care through a network of predefined institutions: public hospitals – where a sometimes high financial contribution is required – some non-profit community structures and some private structures with which an agreement is signed.

The insurance is financed by a solidarity fund to which the families contribute the equivalent of one dollar fifty per year, allowing them to be involved in taking charge of their own health care. Also by participating in this project as stakeholders, they have the opportunity to share their opinion about how it works. They pay a fixed minimal amount for each episode of illness, except for children under five whose care is entirely covered by the insurance. In this way, the families who have the card are guaranteed essential care at a minimal cost to them.

How to guarantee the participation of families in deep poverty?

We are present in high poverty urban areas with an accumulation of vulnerability criteria (lack of jobs, poverty, illiteracy, problems of sanitation, violence, etc.). To reach those in poverty, the following elements have been crucial:

Learning from an evaluation completed in 2014.

An evaluation of the project was completed in 2014. One of the most significant findings shows that this project virtually eliminates impoverishment from medical expenses and makes it possible for the card-users not to give up essential care.

This integrated system has significantly reduced child mortality.
If we consider indicators such as the rate of anemia, the use of family planning, and vaccination coverage, we see that the results are better for the families who have the health insurance card compared with the general population of the metropolitan area. This finding was based on the 2014 evaluation compared with results from a national survey conducted in 2012.

The cost of this program is roughly US $11.5 per year and person covered. Thanks to this cost-effective project, the continuity of care is significantly improved.

Implementing this system on a wider scale would involve many challenges.
In Haiti, less than 5% of the national budget is devoted to health care.
This situation is aggravated by disruptions in the public health system (closure of some programs, reduction of staff, strikes, etc.).
Donors are currently more likely to fund programs for specific conditions such as tuberculosis or HIV care rather than for primary health care.
The latest report on National Health Accounts shows the disproportionate out-of-pocket payments: now in Haiti households themselves currently pay for more than 30% of total health expenditures, while the State pays only for 9.7 percent.

This health insurance project is efficient largely because it is part of an integrated program.
It takes into account the whole community and reaches out to its most vulnerable members.
We recommend that primary health care be made a priority. A recent study by the World Bank about financing healthcare in Haiti makes the same proposal.
If a similar program is to reach a wider population, the State must increase its portion of total healthcare expenditures.

Read the synthesis report of the UN side-event on social protection floors.