Posted on 24 March 2021
This page is available in Português 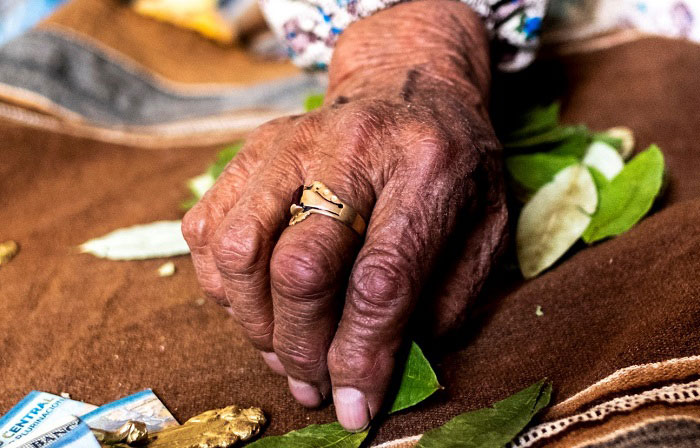 The global pandemic is difficult for everybody, but in Latin America it is especially difficult for those living in poverty and now forced to depend on aid.

For public health reasons, certain governments in Latin America and elsewhere have compelled people to stay in their homes. Informal workers, already living in very precarious situations, had to leave their jobs.  Now they have little way to earn a living at all.

Aid programs have been rolled out to help vulnerable people, but their support does not reach everybody, especially those living in severe poverty. There are people without official documentation or living in neighborhoods not recognized by the authorities. There are displaced persons and those not able to read or fill out the required forms. Many do not have internet access. Some speak indigenous languages. “All these people,” says Victoria Huallpa, a member of ATD Fourth World Bolivia, “are invisible to the state.”

During the Covid-19 crisis, people poverty who seek government aid endure humiliating processes and administrative shortcomings, while risking exposure to the virus. Often neighbors end up being the ones to make sure help is in place for those most in need. These neighbors work together to overcome bureaucratic obstacles and share what they have with each other. So actual assistance comes down to individuals, to their courage and generosity.

In the following passages, Victoria explains her commitment to helping people in the city of El Alto who are experiencing the pandemic in the most difficult circumstances. She talks about braving the streets to see what is happening, to listen to people, and to find ways of working together.

There are three banks in the Cruce Ventilla section of El Alto. One morning, I saw a very long queue for one bank because it was the only one of the three banks open to clients. Most of the people queuing were elderly. And I thought to myself, “How can all these elderly people be queuing outside when they are the most vulnerable?”

I approached the bank and asked why these people were being made to wait for so long. Then I took a walk and dialed the numbers I found on posters to ask if other banks here were going to be open. “No,” they told me, “only in Senkata–you should go down there.” How could so many elderly people possibly get to Senkata, an hour’s walk away?

“No, we have nobody,” they replied.

When I looked around, I saw an elderly man who was a neighbor of mine. He had been in line since 5 a.m. “I need to collect my pension,” he told me, “and then I can leave.” It was already 11 a.m. and the bank was only open until noon. It was clear he wasn’t going to be served. There were a lot of people waiting ahead of him. This particular week was the one week each month when people could collect their payments, including teachers’ bonuses and pensions.

“What can be done for these people?” I was thinking about this question when I saw Sister Rosa, whom I know from church. “What can we do?” she asked me and we began to discuss the situation. There were many young people who had nothing and did not know support was available. Some elderly people were also unaware that they were entitled to claim anything from the state. There were people without official documentation and people who lived alone or in the countryside.

“We have to do something!” we said. And act, we did! At the very least, we wanted to help these elderly people collect their payments without waiting for such a long time. The next day, we returned and joined the queue to help people collect their money. For four days, we worked with the elderly people to make sure they were taken care of quickly and did not have to worry.

There is a community center near my house that works with approximately 350 families who have about 700 children. Roughly 200 of these families live in poverty. We wondered what the center was providing now. If needed, we decided, we would speak to the church pastor and arrange for delivery of food parcels.

Going out means taking all kinds of risks

It wasn’t until I left my home after two weeks of lockdown and went out into Cruce Ventilla that I started really thinking about other people. I had been focused on my own well-being and my daughter’s. But as soon as I ventured out, I saw many people who were truly in need. This was when I started trying to help as best I could.

At the moment, it is so sad when you go out into the streets. You always come across somebody in need–in need of someone to talk to or in need of food. You become truly aware of hunger! When you are shut in your house, you do not see these things. But if you go out, you are confronted with a reality that is difficult, very difficult.

Sometimes I think that if I go out every day, I’ll want to help every single person I see and perhaps I’ll end up causing problems.  Maybe I’ll catch the virus. It could look strange to some people that I am helping with paperwork. Maybe a policeman will stop me because I am outside when it is not my designated day to go out. Perhaps I’ll be helping an elderly person with documents, and that person will ask me to go down to La Paz to finalize the paperwork. I won’t be able to say no. Perhaps I will have to travel somewhere eight hours away and pay a fine.

This article is part of a series on solidarity and mutual care in the communities most affected by poverty in Latin America during the Covid-19 pandemic. Text adapted from a video interview with Victoria Huallpa in May 2020.

Online seminar: Solidarity, mutual support and resilience; learning from the initiatives of communities living in poverty in Latin America during the pandemic. (Video with English subtitles)

The members of ATD Fourth World who participated in this online seminar for dialogue, reflection and mutual support are:

These people are all part of an international solidarity group that highlights the efforts of families to develop a range of mutual support initiatives in their communities.