Homeless, But Focusing on Hope 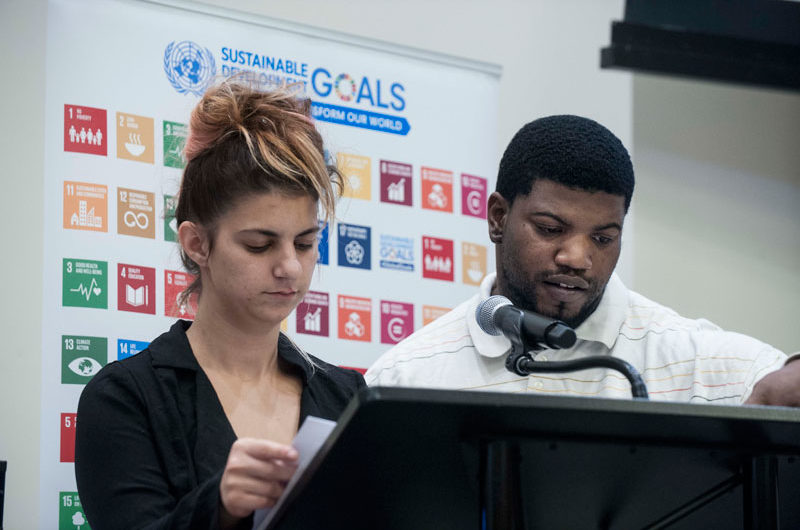 On October 17, 2016 Nicole Maucher and Johnny Ocean spoke at an international gathering about poverty at the United Nations. Because they currently live in a family shelter in New York City and have experienced many difficulties, they brought a valuable perspective to the assembly. In their speech, we see that they are so much more than just “homeless people.”

Despite the fact that her family lives in a shelter, when Nicole Maucher talks about her concerns it’s not about having no home or money to buy things. And when Johnny Ocean describes his hopes and ambitions, money is the last thing on his list.

This couple reminds us to see poverty as more than a lack of money or material things. The occasion of their speech was the UN World Day for Overcoming Poverty, a day that highlights how important it is for others to listen to people with a first hand experience of poverty. Since 1987, this day has given people living in poverty a platform to speak out about their lives and to invite others to join them in efforts to end poverty. More information about October 17.

Speech of Nicole Maucher and Johnny Ocean at the United Nations on World Day for Overcoming Poverty, 2016

Johnny: Sometimes, I feel humiliated because I have in my heart what I want to do with my kids, but I can’t because of our situation right now. I don’t have the funds right now to do the things I want to do with my kids, the things you realize how important they are when you get older. This summer, we couldn’t do a lot of family activities because we didn’t have the money, and when we did have the money, we had bills and things we had to pay for. As parents, we feel self- humiliated.

Nicole: Because we live in a shelter, we feel like our daughter is labeled, like she’s not as important as the kids who do not live in a shelter. Destinie had some problems last year in school. She needed additional help in school that we talked to her teacher about, but she never received any of it. A lot of kids that are in shelters have been moved around a lot. Some take longer than others to adjust in school and I don’t think the schools realize that. Our daughter told us when she would ask for help, she would rarely get it. We helped her as much as we could at home. We decided this year to switch her school so she could get a proper education. Also, because of the lack of her getting help last year, she had to repeat kindergarten because she didn’t know everything she should for first grade.

Johnny: It really hurts me to know that in Kindergarten, people can look down on kids. I realized that when I was in school, I had problems, because sometimes I would act up, the other kids would act up sometimes also. But I would always be the one to get in trouble. Instead of trying to sit and help me, the teachers would just ignore and pass me on to the next grade. I am 27 years old and I still can’t read and write on my grade level. Because of always getting passed along, I started to feel lost and ended up dropping out of school. School is supposed to be a learning space for everybody.

But because you live in a shelter, or because you’re homeless or because you live in poverty you can’t get the same education as other children? Just take the time, and work with the children, don’t just rush them or just pass them to the next grade. Everyone is smart and can learn, so the teachers should teach every child equal. It is very important to make sure everyone has a chance to get a good education and feels comfortable in school. Because, if we don’t feel comfortable, chances are we won’t go to school and if we don’t go to school, we are more than likely to end up in jail, doing something illegal, or get stuck working a minimum wage job, and living in poverty for a long time.

Nicole: As adults, we keep being humiliated. I used to work at a program for kids in foster care. I enjoyed working there and helping the kids. There was one boy who had autism. He was in the program for over two years when I started there. He wouldn’t speak to anyone; he would just shake his head yes or no to anything you ask.

Being in poverty, it’s a struggle all the time. There are not a lot of choices that you have. You may be able to keep a roof over your head but not be able to pay for the transportation you need to go to work.
I hope my kids will be able to do better. I’m going to make sure my kids get the best education they can.

Johnny: I am also going to make an effort. I’m going to go back to school. I am going to try to do everything I can. I want to build a center, a building where different people come together. In the center, I want to have kids, pregnant moms, fathers; I want to be able to help everybody, through different programs such as schooling, trades, family activities, etc. I’ve been down on myself for a while, thinking I can’t do this, but the more shelters I see and go to, the more everyone drives me. I want to be able to do something more. I don’t want money. I just want to give people a different view of life.

To end poverty, our strength is our hope! Even when we get locked up, they can’t take away our freedom, our rights, our spirit, what we believe inside of us. I believe that around the world, France, Italy, the Middle East, down South, if we all could just put away our differences and join together… United we stand, divided we fall! The change will have to happen.

Video of “Moving from humiliation and exclusion to participation: Ending poverty in all its forms” from UN TV.

More photos from October 17 at the UN: