Human rights are our priority! 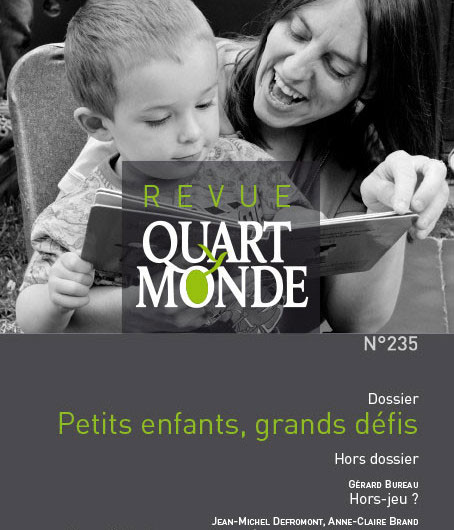 In Madagascar, where families were recovering from several weeks’ worth of floods that had swept through the entire country, we found ourselves focused on our goals for the years ahead. “Human rights are our priority,” says Mrs. Irène. “Everyday, I fight for everybody to respect one another as human beings. Because I live in poverty, I have often been asked to give my grandchildren up for adoption. But I have always refused.” She refused, just as Joseph Wresinski’s mother did before her, and just as many other parents in poverty have done.

Meanwhile, in Spain, Mr. Tony braced himself before meeting with his social worker. At home surrounded by his six children, he told us, “When our first child was born, we were living on the street. We consulted a social worker who would not grant us any assistance, and we had to struggle to keep her from turning our case over to Child Protective Services. Afterwards, we began squatting in an abandoned bar by the river. But the next day, several police cars arrived, their lights flashing, and we were chased down like thieves. Finally, one of our neighbors offered us a tent and a flashlight. We spent several weeks living inside the tent.” Today, Tony lives in a house that was vacated after its previous owners, who were hard-hit by the financial recession, were unable to repay their mortgage and faced foreclosure. Here beneath the beltway overpass on the city outskirts, his children have been able to make friends and settle into their new school. As for Tony, he rides his bike several kilometers each day into downtown Madrid, where he scavenges for abandoned items on the street. He searches trash bins for anything that can be recovered, repaired, recycled, or resold. Throughout the biting cold of winter, as in the burning heat of summer, he is adept at strapping these items securely to his bike for the ride back home. At the end of each day, he is exhausted, and sometimes disappointed. But he always resolves to scavenge again the next day so as to allow his family to live with dignity.

“I do this work so that my family can live,” he says. “I cannot bear to think that, in this world, a child can be allowed to die because they did not receive the vaccinations that they needed, or because they were left unaccounted for and never got to attend school. I can’t stand it that some children are separated from their parents. There is too much injustice out there — low-income people are treated with contempt. Some of must fight to scrape by every day, while others have more than enough of what they need. Our world must change, and I want to take part in this change. It is time to make humankind a top priority.” The previous day, his wife, Raquel, joined in a group discussion, saying, “I always tell others about our experiences. My life experiences are what allow me to contribute to the struggle for human rights.”

Mrs. Irène, Tony, and Raquel continue to fight to be allowed to live together with their families. In so doing, they strive to achieve a world where every person can finally grow up and live together with liberty. “A world,” as Joseph Wresinski once said, “where human beings will no longer have to fear one another, where every person will have their equal rights recognized.”