Skip to content
Home > Asia > Philippines > I Live in A Cemetery

I Live in A Cemetery 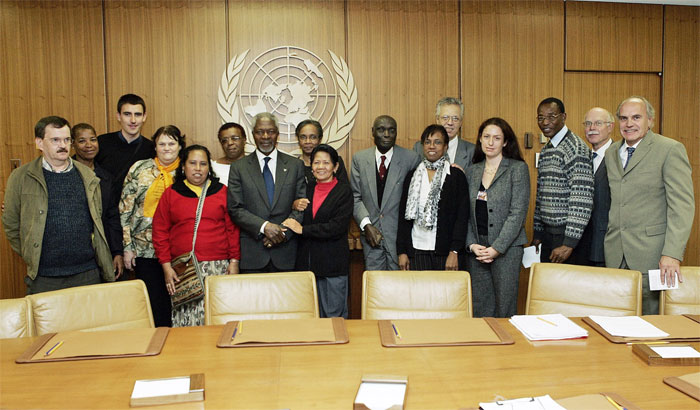 It was a woman living in a cemetery who taught me that poverty could be overcome.

I heard her speak in 2005 in the basement of a building in the East Village of New York City. My wife, who was doing an internship with the local ATD Fourth World team organizing the event, had brought me along for a rehearsal. The twenty-odd chairs lined up in the long basement were only sparsely filled when the speakers began their remarks. They were calm and informal readings of statements that had taken weeks of preparation. The next day the speakers would meet with Kofi Annan, then Secretary General of the United Nations, on the World Day for Overcoming Poverty.

The speech that I remember most clearly began simply: “I live in a cemetery.” The speaker was a middle-aged woman from the Philippines with dark hair and clear eyes that scanned the small crowd and didn’t hesitate to make eye contact whenever she could. As she read her prepared remarks she seemed at once humble and dedicated — she was there for a purpose.

She was from Manila and part of a community of people who, lacking any formal housing, lived in above ground tombs in one of the city’s cemeteries. She joked about how creepy it sounded to say she lived in a cemetery, but then turned serious as she spoke of the family and community that had asked her to come to the UN to speak on their behalf to share what it was like to live in extreme poverty.

When her remarks concluded, she returned to her seat and the next speaker began, continuing on through the evening, each speaker rehearsing their routine and then sitting back down to a smattering of applause. When the preparations were through, my wife and I left for the F train back to Brooklyn. The woman from the Philippines stuck in my mind, and the next day as I sat in my office staring at my computer, I wondered whether her speech was going well, whether it would make any difference — would her words matter?

Secretary General of the UN

That day she’d be talking to the Secretary General of the UN, but by the time the weekend rolled around she would be back to living in a cemetery, I would be getting ready for Halloween, and Kofi Annan would be flying around the globe meeting with world leaders.

A few weeks later I saw the official photo of the event (shown above), of all the smiling faces I had seen in that basement arrayed around to Kofi Annan. After seeing that picture, I had no doubt that the woman from the Philippines made herself heard — you can see her holding on to Kofi Annan’s arm for dear life in the picture. I later learned she had been so determined to make sure he understood her and listened to her that she wouldn’t let go of him throughout the whole meeting.

Of course, the UN didn’t rethink its approach to poverty because of one speech from a woman who lives in a cemetery. Real change takes persistence; it happens bit-by-bit over years. But enough encounters with people tenacious enough to take hold of the Secretary General’s arm, and the UN has changed. Original well-intentioned ideas like “eliminating extreme poverty by 50%,” that would exclude the poorest, those living in cemeteries or garbage dumps around the world, has since been replaced with the goal of “leaving no one behind.”

That October day in 2005 was one step in that process of change, as one of the most important men in the world took time to listen to a woman who lives in a cemetery. I remember her story and I remember meeting her, but her story is not unique — there are countless people in even the most impoverished communities who are working every day to overcome poverty, and giving them a chance to speak for themselves is a big step in overcoming poverty.

Tita Villarosa tells her story of meeting Kofi Annan for the website unheard-voices.org.