In the Shadow of Independence 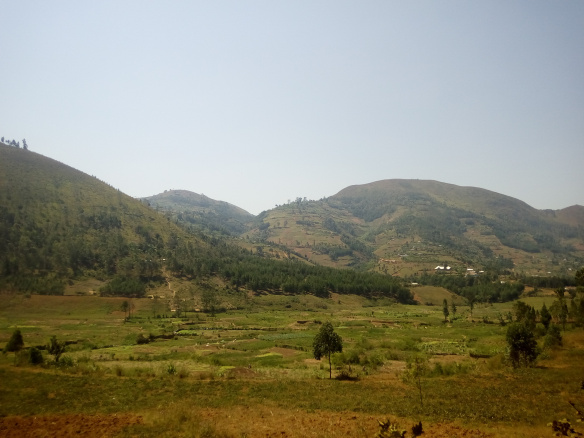 In late June 1960, the Democratic Republic of Congo gained independence from Belgium. For many, June 30th is a day of celebration. But for René Bagunda Muhindo, political freedom doesn’t mean much to people still suffering from poverty. “Many are born and die”, he explains “without having been free for one day in their life”.

June 30 is the anniversary of the independence of the Democratic Republic of Congo. That day, I was making visits in Luhwindja, a chieftaincy about 90 kilometers from the city of Bukavu in the east of the country.

In the afternoon, while I was watching a France-Argentina football match, a young man gave me a bottle of Coca-Cola saying, “This is a gift for Independence Day. We must eat and drink.”

For some it’s just another day

In the evening I went for a walk around the neighborhood. Behind the commercial houses alongside the road, I could barely make out a small mud house in the darkness. All the neighboring houses had light streaming through slits in the windows and doors, but this one was particularly dark.

I went up and knocked at the door. Someone opened, but it was too dark for me to see anyone. I turned on my flashlight and saw five children with torn clothes, covered in dust. They had been playing all day and had no one to wash them at night. The eldest, about 11 years old, was standing in front of me. It was he who had timidly opened the door.

“Good evening”, I said.
“Good evening”, he responded.
“Are you doing okay?” He didn’t reply.
I asked, “Is your mum here?”
“No. She is in Bukavu and comes back Saturday, July 7”, the boy answered.

They were hungry. I knew the signs well.

I had felt the same thing when I was six years old, alone with my sisters waiting for our mother to return. So I asked the children:

“Have you eaten?”
“No”, four of them replied in unison. The eldest did not react. He felt responsible for the others, and powerless. My eldest sister acted this way when she had nothing to give us and my youngest sister was crying.
“What are you going to eat?”
“We don’t know.”

Right away I went to a restaurant where I eat when I am on visits in the neighborhood. I bought two plates of food that the eldest child carried back. The five children feasted like escaped prisoners after a week without eating.

Troubled by mixed feelings, I went back to the restaurant. The lady there asked me what was wrong and I explained to her. She didn’t hesitate to tell me,

“That dirty child with you? These children are thieves.”

Her criticism didn’t upset me. I replied that no matter what they might have done, no child deserves to spend nights without eating, and that in such circumstances even adults might not be able to resist a hot stew if no one sees them. The lady nodded and told me, “What you say is true.”

The next morning before going to church, I went to see the children. They were outside, huddled on top of one another. Even through my sweater I felt a chill, but they weren’t wearing anything warm. In the mountain villages of South Kivu, it is cold at night and even in the morning before the sun begins to warm the day.

Independent, but not truly free

The question of independence haunted me. Independence! I recognize its value in the history of the country, but today it has become demagogic and contrived. The poorer you are, the less it concerns you.

This June 30th, thousands of dollars have been spent so that the rich can eat and drink. Politicians used this opportunity to talk about their plans for the elections scheduled for December. But behind the walls of the cities, in the back of the villages, thousands of children spent the night without eating. They didn’t know if they would get their report cards at the July 2nd announcement of results because their parents had not paid the school fees. Thousands of children spent days far away from the affection of their mothers who had left to find food for them.

Can I be proud of our independence? No.

I will be proud once every child in my country is freed from hunger, cold, and ignorance.

If I were a national deputy or minister, I would make sure that June 30th takes place differently. That day I would invite all Congolese people to do an act of good citizenship so that each child and each adult could smile again. Many are born and die without having been free for one day in their life, and no one around them knows it.

Real independence is justice in the heart. It is peace and a better life for all.

This piece was first published July 17, 2018 in French on Un Monde Autrement Vu.

More on ATD Fourth World in Democratic Republic of Congo.