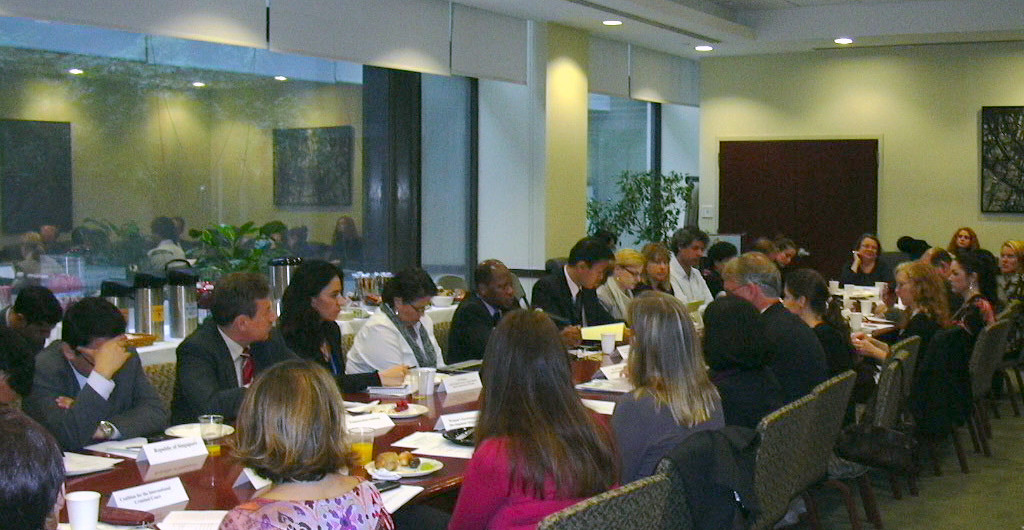 Over the last six months, the International Movement ATD Fourth World and the Baha’i International Community have organized a series of informal breakfast dialogues on topics related to the follow-up to Rio+20 and the Post 2015 agenda. These dialogues aim to provide a convening space for Member States, civil society and UN agencies to contribute to the building of a unified vision for the post 2015 Sustainable Development Agenda. So far, both organizations have hosted four dialogues that have shaped conversations on topics such as the UN Task Team Report, Sustainable Development Goals (SDGs), inequality and poverty. Although a very diverse round of issues have been raised, participants seem to be agree about the necessity of a transformative agenda that can provide structural changes.

Highlights of the first breakfast on July 6 emphasized four key dimensions of a more holistic approach: inclusive social development, inclusive economic development, environmental sustainability and peace and security. Participants believed that the ECOSOC has an important role for the follow-up to the Rio+20 outcomes and the post-2015 development agenda. It was also made clear that there is a need to distinguish between consultation spaces and negotiation spaces. The next few months should be for consultation. It was evident throughout that the UN Missions, agencies and civil societies need to continue to work together.

The second breakfast brought together stakeholders on September 13th The exchange that day focused on the SDGs. It was brought to the attention of the attendees that while MDGs are focused on the issues of developing countries, the SDGs support a more universal set of objectives. A growing number of voices insist that the key to success is empowerment through a “people-centered approach” and that people living in extreme poverty will be most affected by decisions. It is therefore important to view them not as victims but as actors who should be part of the consultation and decision making process.

The third breakfast dialogue, held on October 10th, was based on the subject of inequalities. Those present responded to this broad topic by identifying inequalities as the greatest obstacles faced in implementing the MDGs. The Post-2015 framework should recognize gender equality as key to progress. It should be universal, rooted in a human rights based approach and based on existing commitments by the international community. It should also focus on accountability and transparency, be attentive to the aspirations of the poorest and most vulnerable, and have transformative effect on power relations, exclusion, structural inequalities and all forms of discrimination.

As the breakfasts dialogues continue, all collaborators have continued to be forthcoming. In the latest dialogue, on November 14th, the participants shared their ideas on poverty. They concluded that human rights have to be central to economic development. More importantly, it was agreed that to understand poverty, all stakeholders need to engage directly with people living in situations of poverty. While the MDGs have not engaged with the poorest people, there is still opportunity to reach out and include their thinking in the post 2015 sustainable development agenda.

The next breakfast dialogue will be held on December 12 on measuring progress on the UN sustainable development agenda. To further the dialogues, we continue to encourage the participation of civil societies as they bring to light the voice of those living in situations of poverty. We would also like to recognize the support and commitment of the UN Missions and agencies who have contributed speakers, thoughtful insight and a willingness to share ideas. We look forward to continuing breakfast informal dialogues on the Rio+20 and the Post – 2015 development agenda.