International Day of the African Child: Tapori Children Are Busy

Above: The children of the Hidden Talents group in Ouagadougou.

Established by the African Union on 16 June 1991, the International Day of the African Child is a reminder of the hundreds of South African children massacred in Soweto during a march for their rights. Beyond this commemoration, it is an opportunity for African States to take stock of the rights of the child in their countries and to seek to take action to improve the well-being of children. For 2019, the official theme is “Humanitarian Action in Africa: Children’s Rights First” For ATD Fourth World, active in 7 African countries, this day is an opportunity to highlight what children are doing to fight poverty and their proposals to promote and advance  their rights.

The Tapori group  “Hidden Talents” from Ouagadougou in Burkina Faso plan to meet the mayor about the rights to housing and education, in their district of Taabtenga, a “non-leased” district, where residents have built houses on unallocated plots of land and can be evicted at any time. The exchanges will be based on interviews conducted by the children beforehand, using cameras and microphones. They hope to encourage the elected representative to react to some of the challenges faced in his jurisdiction.

Transforming the community with young people in Dakar

On the Day of the African Child, teenagers from Grand Yoff, a suburb of Dakar, Senegal, will present ideas about their neighbourhood. The ideas come from reflections produced at the CAEDAS Centre with the support of  facilitators. The event  is about enabling them to, among other goals, understand the reality of their community and committing to changing it. This initiative is part of a project launched in February 2019 on the rights of children and adolescents. The project will continue on the International Day for the Eradication of Poverty and will end in November with the celebration of the 30th anniversary of the Convention on the Rights of the Child.

In Central African Republic, celebrations that highlight the importance of peace

The facilitators and children of the Danzi Street Library in the Central African Republic will walk with village leaders and parents under the theme “Conflict and Crisis in Africa. Protecting children’s rights.” Children will read messages, perform a sketch and traditional dances.

The Tapori group of Koulamanja Lithon will organize two celebrations. 15 June 2019 will be a preparatory day, during which a workshop on hat making, colouring and drawing will be held. A march will mark the day of 16 June. It will start from the Tapori children’s entertainment area and end at the residence of the village chief of Koula-Liton. This will be followed by messages from the children, the chief, the facilitators, the parents and other guests.

The Kokoro Tapori group plans to hold a major meeting, followed by a debate on the theme: “Mediation and social cohesion, keys to peace.”

Finally, at the Centre la Voix du Cœur in Bangui, a play and traditional dances will accompany the celebration, as well as messages from children on the theme “Conflicts and the crisis in Africa. Protecting children’s rights”. 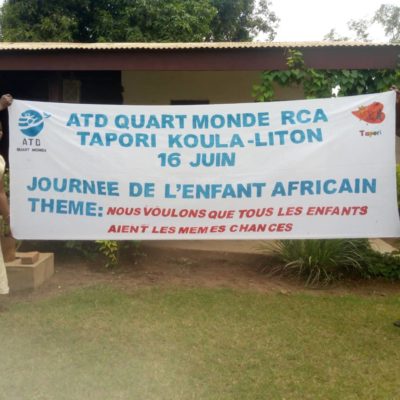