Skip to content
Home > Indian Ocean > Madagascar > “It Is Important to Have Training and Education so That We No Longer Are Taken Advantage Of.”

“It Is Important to Have Training and Education so That We No Longer Are Taken Advantage Of.” 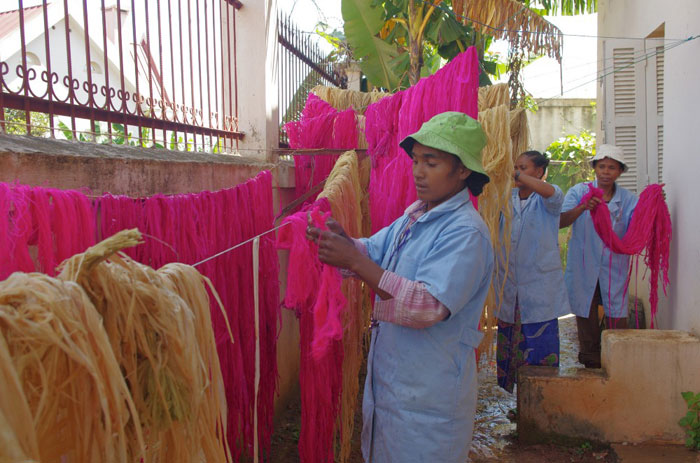 Working and Learning Together project in Madagascar

Marie-Anne describes how the training she participated in with the Working and Learning Together project in Madagascar changed her life.

By Marie-Anne Razafindrafara and Denis Gendre

When I lost my parents, I was entrusted to my grandmother who thought that since I was a girl, there was absolutely no need to send me to school. I have always wanted to learn to read and write and I have always nurtured the hope that I could do so.

When I was 10, I started working for other people. I stayed there until I was 18, the age I got married. First we lived in the country with our five children before moving to Antananarivo where I used to wash other people’s linen and clothes. One day, I was accused of having taken some linens. My accuser took advantage of my ignorance to deceive me; she filed a false complaint and called me a thief. I lost my job because of her and I no longer had the financial means to send my children to school. It was only when I found employment with Working and Learning Together (WLT) that I could afford to send them back to school again.

Even though I live next door to the project, for a long time I did not know WLT. When a neighbour told me they were recruiting, I did not dare enrol since I was illiterate. However, my neighbour pushed me into applying. She explained that WLT was mainly recruiting people in dire situations and that, in addition to crafts, they also offered literacy classes. The ability to learn was my main motivation. When I heard that I was accepted, I was elated!

Yet, I nearly dropped out after a month; the craftsmen who were training us laughed at my ignorance. Fortunately, one of the people in charge gave me enough motivation to hang on. He used to tell me that WLT was for people like me. So I stayed. I made efforts to learn everything we were being taught and I succeeded – contrary to those who said I wasn’t smart. Some of the trainers strongly encouraged me. They used to tell me that I would succeed in doing what was being asked of me, even if it was difficult for me to get there. I strove to learn. They would tell us that our successes would give us great joy. I mastered what I learned and that is why I stayed at WLT till the very end.

Today I can read and write and nobody will ever be able to take advantage of me again. Being able to read and write is a considerable change to my life. My children are proud; they say that their mother is no longer as she used to be, that she knows things.

I learned to control myself and to be more diplomatic when I say something. Before I used to shout and speak nastily, which is no longer the case. My husband has noticed that I have learned how to discuss things. Before, I did not dare engage in a discussion because I was not self-confident. I was always wearing a hat, which would hide my eyes because I was ashamed of speaking with unknown people.

However, today I am more self-confident and I dare to voice my thoughts in discussions. It is because we are ignorant that we do not dare speak up. When we know things, we are not scared any longer.

Those neighbours who used to laugh at me before say that my life has changed, and they come to me to look for help. My children are envied because they attend school.