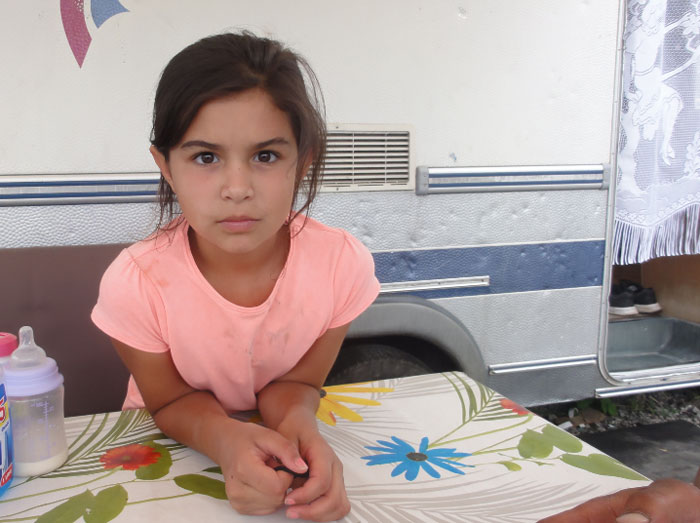 A Romanian family who settled in France struggles for their child to be allowed to attend school.

“La scuola? La scuola, Gianina?” Whenever we meet, Salome pops up with the same question. She wants to attend the school, which is about 20 meters from the place where she lives.

Salome and her whole family are Romanian citizens. She was born in France and has always lived on the same plot of land—a squat in the Paris area. Salome has a 5-year-old sister and a 2-year-old brother. She is the eldest.

Salome’s parents were never able to attend school themselves. The father explains:

School Should Be for All Children!

“I could not go to school. I was never given the opportunity. Now I do not want my daughter to go through the same experience I had to go through. I always have to rely on others for any papers. I want my children to go down a different road. My daughter, well, she can learn.”

He adds, “School should be for all children! Why don’t they want to accept ours? I can’t understand it as I have a resident’s permit.”

So Salome’s parents decided to make sure she could attend school. They enrolled her with the School Department at the Town Hall, proving that she has all her vaccinations. Their application was submitted to the Mayor who has to approve it. “We’ll call you,” they were told. Then they heard nothing.

Finally, with the help of a person who knew the family for several years, things started to move forward. An appointment was made with the Inspector of the Academy (LEA). He had the authority to force the Mayor to accept a child in the school. If he still refuses to do so, then the Defender of Rights, a representative of the government, can become involved and the application process starts again.

At last, after a long struggle, Salome walked through the gates of the school for the first term of 2016. She was nearly 8 years old by then and had lost two years of schooling.

Salome is proud to leave each and every morning with her school bag on her back. In a very short time, she has mastered French and now she can read.

However, a court decision was made to expel Salome’s family from the plot of land they were squatting on. It was executed on the morning of 12 June 2017. Thankfully, the family was able to settle elsewhere, still in the same town, albeit further away from the school.

Will Salome still be able to attend school in the future, we wonder? We hope so.