Skip to content
Home > Latin America and the Caribbean > Bolivia > Reflections on Justice: A Fourth World People’s University in Bolivia

Reflections on Justice: A Fourth World People’s University in Bolivia 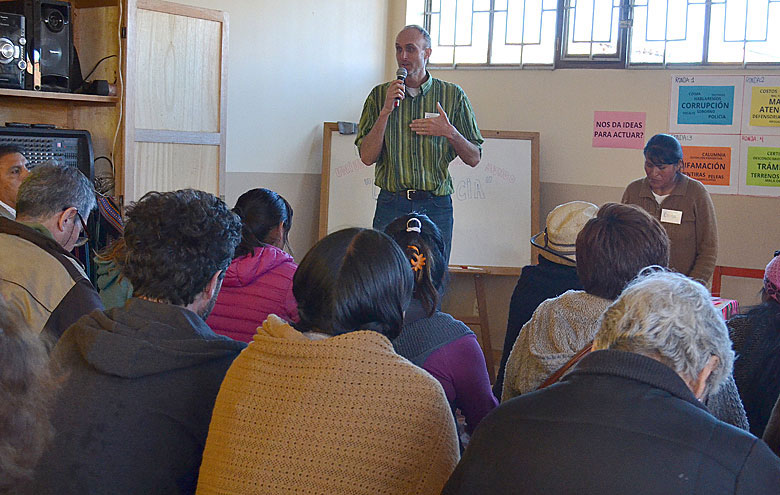 “The laws are not made for people who have little money.”

What difficulties and experiences have you had with the justice system? How has this affected you and your families? These questions launched conversations in the nine groups preparing for a Fourth World People’s University (FWPU) in Bolivia. When the event took place in El Alto at ATD’s headquarters, more than 40 people attended and the subject was justice—or the lack of it experienced by people in poverty.

The People’s University invited Oscar Cordero, a lawyer, to listen to the more than 40 attendees and then discuss issues related to the justice system that many Bolivian families face in their daily lives. In the preparation meetings people expressed a number of common concerns. These included corruption, defamation, and negative attitudes or lack of attention from police and the entire justice system. These issues became the focus of the FWPU on November 9, 2018.

The comments below from FWPU participants illustrate the difficulties that many families encounter when they interact with Bolivia’s justice system. The meeting went on to discuss tools that might enable the justice system to treat people better and more fairly.

Corruption in the Courts

One of the FWPU participants opened the meeting with a comment about corruption in the courts. “Three years ago, my brother-in-law died in an accident. As the other party began to present their defense, the prosecutor began to hint that we had to give him money so the process could move forward… You cannot get witnesses; you have to give money even to people who help you by testifying on your behalf.”

Mr. Cordero responded to this saying, “In some cases, we promote corruption ourselves. When you go to court, you should not have to pay the officer because the summons server earns a salary. The way to avoid corruption is to tell the lawyer, ‘I want us to perform justice in the most transparent way and in compliance with the law.'”

“But what do they do when we expose this sort of thing?” asked a young man from El Alto. “They are going to work against us. I have seen that. If you talk about rights to the police, they throw you out. They make you feel as if you were nothing.”

One man from a rural community reflected, “Who promotes corruption? People who have money. Poor people do not encourage corruption. It’s true. Who is in the prisons? The people who do not have money.”

One participant brought up the issue of lack of attention or negative attention in judicial and police centers. “I found myself in a child support case for my little girl,” she said. “Going to these integrated centers of justice discourages you because they do not treat you well. Instead of helping you, they scare you. They scold you and treat you badly… You become so afraid that you don’t even want to start the process.”

Mr. Cordero explained the procedures people could use to report cases of malpractice. “In all public institutions there is a department of oversite or human resources. If a policeman is denying your rights, you complain to his boss. If the commander does not pay attention to you, you should [go] to the department of oversite. It is the same with ombudsmen. And if nobody listens to you, there is the media.”

One attendee responded to this by talking about a personal experience: “A short time ago, my brother had problems. The Children’s Ombudsman’s Office [Department of Children and Families] has not paid attention to us. They said, ‘You are only the aunt. I will only talk to their dad.’ They did not want to listen to me. As an aunt, I also want justice for my nephews. Yes, there are superiors to complain to, but will they listen to us? I doubt it.”

“I believe,” added another participant, “that we have to become stronger and assert our rights. If somebody does not treat us well, we should denounce this and take it all the way… If we become tired, if nobody says anything, things will always be the same.”

Justice with a Price Tag

Some participants brought up the fact that people suffer from defamation. “My daughter worked in a hotel. Her boss had accused her of stealing. Not only her but me also. I went to the Special Anti-Crime Force. The next day I found myself in the Obrajes jail and my daughter in the Miraflores jail. They only asked for money and more money. I do not have money, so I borrowed the money to get out. But I couldn’t get my daughter out. I do not know what to do and I do not know where to go. I’m desperate. I feel helpless.”

“For many people,” insisted another participant, “before you are convicted or have a trial, before seeing if you are guilty, they already put you in jail. The family suffers, the children suffer, the years go by, but who gives you back your time and your dignity?”

Upon hearing these comments, Mr. Cordero commented, “Sometimes, if you have not done anything or if you get into a problem inadvertently, you have to pay some associated costs. Unfortunately, the only place you can go is the court system, which is unfair. So in order to take care of yourself … never sign a paper without reading it. And if you do not understand it, it’s better not to sign it.”

The last intervention highlighted the role of professionals in defending people’s rights. “There are really people who cannot afford the cost of a trial. There must be a commitment to help from those of us who are professionals, not only in the area of legal issues, also in health and education.”

This Fourth World People’s University encouraged attendees to continue thinking about these issues and to participate in dialogues that allow people, especially those facing extreme poverty, to recognize each other as having important information and knowledge to share with each other.