Skip to content
Home > Latin America and the Caribbean > Guatemala > Let’s Get To Work!

Let’s Get To Work! 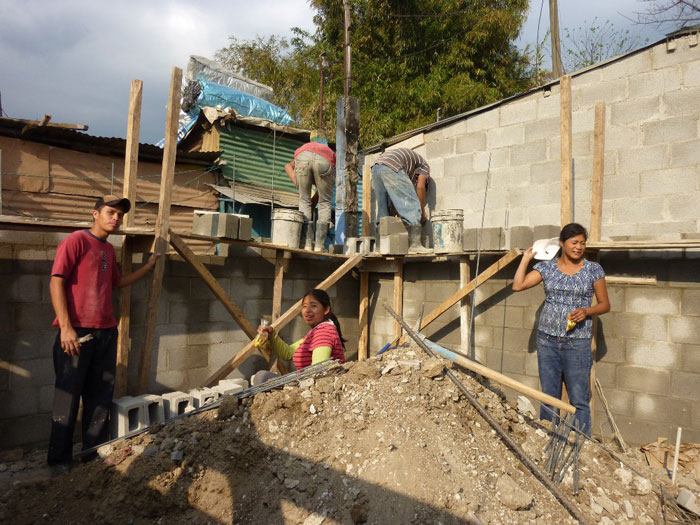 After a disastrous fire destroys homes near a Guatemala City landfill, a community organizes to rebuild.

The fire during the night destroyed six houses in the neighborhood near the largest landfill in Guatemala City. Because of the narrow streets, the firefighters could not access the area and the families lost everything.

After putting out the fire, many of the neighbors assembled to prepare food, carry away the ashes and charred objects, and donate clothes. Each family began to salvage what the fire had left behind; this consisted mainly of the sticks and metal sheets used to mark their land. The Municipality and The National Coordination for Disaster Reduction of Guatemala (CONRED) offered temporary housing, food, and some sheets.

“ In the scheme of things, the loss of housing was not that important. In fact, many families have close relatives in the neighborhood. Although there isn’t much room and we all have to all squeeze in, what remains important is that we are all together – despite the fire – supporting one another,” said a neighbor.

Gladys, a participant in ATD Fourth World’s Working and Learning Together (TAJ: Trabajar y Aprender Juntos) recycling project, was among the victims of the fire. The local ATD Fourth World team has worked closely with Gladys and other families in the neighborhood for some years. Members of the recycling workshop were very moved by what had happened to Gladys, her family, and her neighbors. They decided to gather a few things that they thought might be useful and bring them over the next day. Everybody contributed whatever they could, whatever they had.

Weeks after the fire, a nearby organization offered to build a cinder block house for the families. They were happy to donate materials and to hire builders. They just asked for one member of each family to be present throughout to support the construction. Everyone had to contribute to the construction of the houses.

When we found out, we knew we had to be involved. We weren’t very strong, nor did we know much about construction, but we were ready to dive in! We started by helping to clear the land to make space for the reconstruction. Other ATD Fourth World members joined the volunteers from the recycling workshop and we promised to turn up every Thursday until the last house was built. Even some women from the workshop who had a stall at the market or sold food on the street left their businesses so that they could help.

There was a great feeling of solidarity between us all, regardless of whether we knew one another or not.

Despite the difficult situation the families had to face, we witnessed the physical efforts they made to get their houses back, and the friendship and support between each family member, neighbor, and friend. It was evident that new friendships were built, and old friendships strengthened – not only in the neighborhood, but also with the other people who came and helped.

Working alongside the families allowed us to get to know them better and enabled us to reach out to new people. The arrival of people from outside the neighborhood also allowed people to talk to each other about their different experiences and situations.

After about two months, the houses were finished. Once Gladys’ house was complete, members of the TAJ Workshop and those who helped with the work were invited over.

That day, we celebrated the strength of resistance, particularly our closeness and our friendship. As Gladys’ husband said, “Now I know how much you mean to me because I know I can count on you.”