Skip to content
Home > World Day for Overcoming Poverty > Letter to Friends Around the World – No. 93

Letter to Friends Around the World – No. 93 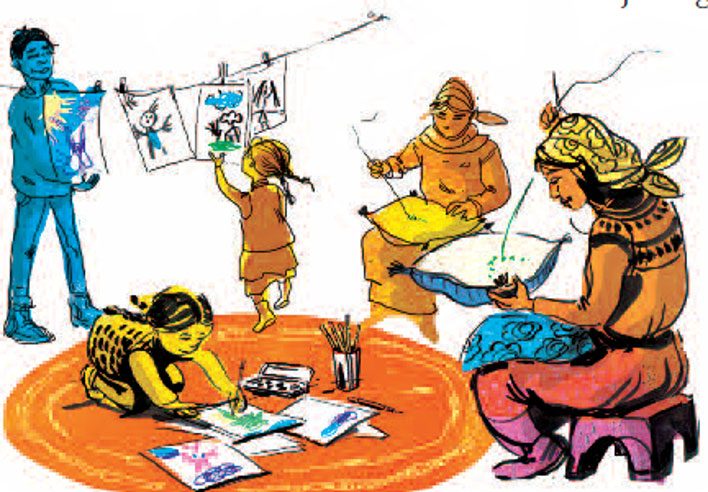 Excerpted from – Letter to Friends Around the World – No. 93

Drawing hope and strength from solidarity

In the incredibly blue sky of October 17, 1987, ATD Fourth World founder Fr. Joseph Wresinski bore witness to the “poor of all times, fleeing from place to place, despised and disgraced.”

Today, who are these “millions and millions of children, women and fathers”? They are the ones always and forever forced to leave: seeking to make a life elsewhere, walking for weeks or months with their only wealth being what they can carry, which may mean only their children.

They are the ones refused entry, yet who shake the barriers, thereby questioning our humanity and how we want to live together.

They are the ones condemned to live apart: in so-called temporary centres or camps, asylums, unused barracks, and dilapidated housing. They are herded together, as has always been the case for those with no place of their own, in the grey areas of our cities, along rivers banks, at the edge of forests. They are pushed out of sight, out of mind, and at the mercy of a generosity that sometimes forgets its
promises.

Today, who are the “millions of men, women, and children whose hearts are still pounding strong to the beat of the struggle”? They are the Malagasy mother whose home for years has been a plastic tarp too low to stand beneath. It is she who, in one of our gatherings and after everyone had spoken, raised her hand to say, “Above all, we must not forget that there are still people who are all alone and who do not know us. It is for them that we are together.”

They are the fathers and mothers of Great Britain, whose daily struggle for life and dignity is completely ignored. Systematically demeaned, from government billboards to mainstream media, they are labelled as scroungers and freeloaders, considered a drain on resources. To counter such disdain, these families affirm through a multi-media exhibition of which they are the authors, The roles they play: Drawing hope and strength from solidarity.

This editorial shows us how much people deprived of everything are concerned for others, especially those who have even less than they do. They demonstrate a deep rooted sense of solidarity. In the following four articles, you will discover more accounts of such solidarity.

We regularly receive news through your letters and emails, and are always happy to share this news with you on page 4. Thanks to your contributions in our discussion forum that was launched during COP 21 (2015 Paris Climate Conference), we also know that you are very concerned about climate change.

This time, we would like you to write in sharing what you, and those around you, are doing yourselves to create these moments of solidarity to support the most vulnerable in their communities and defend human rights for all.

They are young people of the Central African Republic who saw the country’s flood of violence rip through their own families. They resisted hatred and revenge, instead joining on the tarmac of the Bangui airport refugee camp thousands of children shut out of school. Today these young people continue to facilitate street libraries in the most abandoned places by bringing knowledge and beauty, the tools for finding peace.

Today who are the “millions of men, women, and children whose courage demands the right to priceless dignity”? They are the families in a Beirut neighbourhood in Lebanon where thousands of refugees, mostly Syrian, have been taken in. For families already living in this under-resourced neighbourhood, this influx worsens the struggles of daily life. However, those who have had so much difficulty, even finding a place for their own children at school tell us, “We went through the same despair, the same sleepless nights as they’re experiencing. We cannot close the door on them. Even if it’s difficult, we can only keep trying to live together peacefully.”

“I would like to be an ambassador for ATD Fourth World,” said an Eritrean woman welcomed by ATD members in Great Britain. Her words remind us that we gather together because what we want, wherever we may be, and elsewhere as well, is for no human being to be excluded. May we truly leave no one behind. We come together precisely in order to learn from those who, because of their suffering as well as their hope, want most that the world become a better place. It is with them that we can achieve the peace that the world so needs because, beyond bitterness, they draw hope and strength from solidarity.