Lucette Palas: Liberating Speech in the Face of Injustice 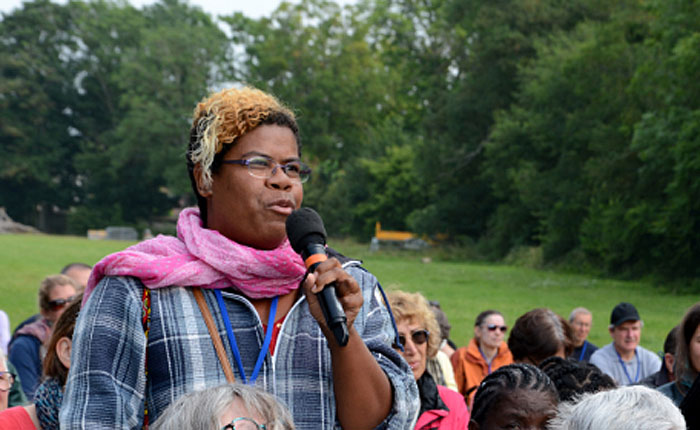 For Lucette Palas, a Fourth World Activist from Reunion Island, speaking out is a way to challenge prejudice and defend your rights.

As a child, Lucette didn’t understand why her mother “lowered her head and didn’t speak up”. So Lucette decided she would speak up and now it’s almost impossible to stop her. A few words of Creole sometimes slip in because, as she admits, she doesn’t like to speak French. But she will if it’s needed to call out injustice and counter prejudice against people living in poverty. Lucette doesn’t hesitate to challenge people she meets. “Détak la lang!” she says. “Everyone has freedom of speech!”

For Lucette, ATD Fourth World was first and foremost a means of escape. When she was 15, a friend introduced her to ATD. “Back then, I wasn’t allowed to go out”, she recalls. “So my friend told me everything she was doing: Street Libraries, building the Fourth World House, a youth group…”. Finally, Lucette got permission to go to an ATD family day, an event that made a big impression on her. “It was the first time”, she said, “that I saw a woman stand up in front of strangers, talk about her problems, and not be judged.”

A few years later, Volunteer Corps members offered to organize a Street Library in Lucette’s neighbourhood of La Chaloupe-Saint-Leu. Lucette didn’t really know what it was about, but she was interested.

The Street Library also attracts the children’s mothers, many of whom are very isolated in this rural area of Saint Leu without much infrastructure.

Then Lucette started her own association, Ti Yab Lé O, a support group for women who have suffered violence. “I didn’t plan to create a group”, she says. “But after hearing all these stories of violence, we decided to say something so what happened to us can help others.” Lucette introduced the group to Forum theatre as a tool for self-expression and collaborative problem solving.

After moving to a new home, Lucette stopped working with the Street Library. However, she took part in an ATD Merging Knowledge and Practices event at the Regional Institute of Social Work. She’ll always remember the social workers who cried as they listened to Fourth World Activists.

Now, Lucette speaks to middle schools where she tries to raise awareness of people’s rights. When she speaks to young people, she always urges them to support one other. Above all, she says, it’s important to “say what’s wrong or tell people what they don’t understand.”

Lucette teaches her daughter to “never be ashamed of who she is”, even when a teacher comments on her clothes.

Lucette has gone to several international meetings for ATD Activists, including one in July, 2021where members discussed different ways they’re involved. There she met other people around the world who face the same problems she does. “Now I feel like I have friends all over the world and it gives me strength”, she says.

Always curious, Lucette became a member of the ATD regional leadership team and the Reunion Island board of directors. Lucette explained that she wanted “to see how other ATD teams operate and understand financial issues, to ask lots of questions in the meetings, and make sure Fourth World Activists aren’t left out”.

Today, Lucette spends a lot of time helping families in her neighbourhood with administrative procedures. Neighbours often ring her doorbell because they haven’t received their benefits. On Saturday mornings, children show up to ask if the Street Library is going to take place.

“When you’re a Fourth World Activist, you’re involved in your neighbourhood 24 hours a day”, she says. “When things aren’t going well for people, it’s not an option to just step back.” Sometimes, she admits, she doesn’t want to respond when people ask for help. “But I see how courageous these families are and they need us. We can’t just abandon them. And when I do manage to help someone, it gives me a boost. As long as there is one person who needs assistance, I’m not going to give up.”

“ATD Fourth World’s strength is the voice of people living in poverty”, Lucette insists. For her, communication is energizing and she has a message for all Fourth World Activists: “Don’t be afraid to put yourself out there or take on new responsibilities. And above all, speak up.”