Skip to content
Home > Leadership Team > “Mr. President, We Count on You and You Can Count on Us.”

Posted on 25 September 2018
This page is available in Deutsch 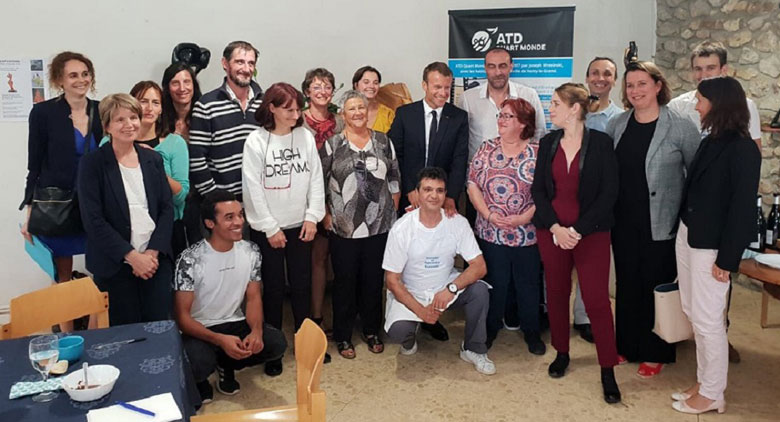 Mr President, to begin we have done a quick round of introductions. I would like to add a bit more about my own background.

I was born into poverty. I was at school when I discovered that my experience differed from that of other people. We lived on the margins of society. It was as a child at school that I first experienced humiliation and the feeling of being side-lined. Nonetheless Mr President, I liked school. I was a good student but the school didn’t want a child like me, what I represented, and I didn’t have hope.

I still get emotional when I think of what one teacher told me. I was ten years old. She said, “Maybe one day you’ll manage to become a cowherd, so long as the herd is not too big.” That was my destiny. I was destroyed. I was lucky to find this movement [ATD Fourth World] where I felt respected. People relied on me and I in turn could rely on others. It took time, a long time, for me to give the best of myself and to trust others. My life today is the result of a long journey. I didn’t become a cowherd, with the greatest respect to those who are, but a staunch fighter for the eradication of poverty. Today I am part of the ATD Fourth World International Leadership Team working with our teams around the world and contributing to the goals of our organisation. Belonging to this movement, without having to deny my roots, is something, Mr President, which I am extremely proud of.

Mr President, as you will have noted from the diverse perspectives you have heard around this table, we represent a range of different life experiences and backgrounds. Some of us here, if I may say so (I don’t quite know why but I feel the need to express this), were born on the right side of the fence and others on the wrong side. Some of us have always lived in great poverty and others have not experienced this at all. Please believe me, Mr President, that when you are born on the wrong side of the fence, and this is where I (as well as some others here) have come from, having a bit of luck or audacity is not enough, nor is it enough to just wish to get out of poverty.

To live in intense poverty is to live a life of instability, in relation to housing, education, health, work, and resources. When we speak of poverty we are not talking about an individual accidental path, but rather of a whole population living a life of exclusion, humiliation, and shame that is passed on from generation to generation. We are referred to as the underclass, losers, marginalized people, and second-class citizens, people who will amount to nothing. We are considered to be useless, incompetent good for nothings who are dependent on social welfare. We are often accused of being profiteers, fraudsters, slackers who would rather take it easy on the dole than to work.

Those who hold these beliefs are ignorant of the reality of our lives. They are too removed from us to see the amount of courage, tenacity, and resistance needed just to keep going. To live in immense poverty, Mr. President, is not living, it is surviving.

Living in poverty means managing the unmanageable. It means going from one crisis to another crisis on a daily basis. It means fighting on all fronts at the same time. Sometimes it feels like we are as busy as a politician. In the same day we could have a meeting at school with a social worker and another at the children’s court. Then we have to go pick up charity packages, which is terribly humiliating.

So what can be done to help people escape poverty and to combat the misinformed attitudes towards those living in poverty? We feel that one of the solutions is to ensure that people living in extreme poverty are involved in developing the solution.

This is a big ask. To ensure that it doesn’t become tokenistic several factors need to be taken into consideration. A first, I would say, would be to recognize that our understanding is incomplete and that we each need to enrich ourselves by learning what other people know. Because of their life experiences, people living in extreme poverty have a unique understanding, a perspective that is needed in order to overcome poverty. What poor people know about poverty must be added to what the experts know about poverty in order to find solutions to this misery together. Perhaps we will come back to you on this matter again later. I also wanted to draw your attention to the fact that France has adopted an approach to tackling poverty that was inspired by Father Joseph Wresinski’s report to the Economic and Social Council (ESC) in 1987 and by the symbolism of the Trocadero memorial. Both insist that poverty is a violation of human rights and ask us not just to reduce extreme poverty, but to unite in a shared goal of eradicating it.

This is what gave rise to the 1998 Law Against Exclusion in France. On an international stage, France has been instrumental in ensuring that the issue of extreme poverty in relation to human rights has been a priority for various United Nations agencies. Shortly after the ESC ruling, Father Joseph called on the UN Commission on Human Rights in Geneva to recognise the connection [between poverty and] human rights. Other resolutions followed, culminating in the establishment of a UN Special Rapporteur on Extreme Poverty and Human Rights and the Guiding Principles on Extreme Poverty and Human Rights adopted by the UN in 2012. Without the continuous effort of France, we would never have obtained these guiding principles which are tools for member states and for citizens to use to reject poverty by asserting the human rights of people who live in the worst poverty.

Father Joseph said that there is no expert when it comes to the question of poverty and human rights; we are all students. When France dares to tell other countries that poverty exists here, that we must struggle against it, and that our country is committed to doing so, this opens the door to others. This is all the more important for us, Mr President, because our movement is an international movement fighting against poverty. I would like to close, Mr President, by telling you how much we are counting on you and that you can also count on us.