Music Schools in the Heart of Subsidized Housing 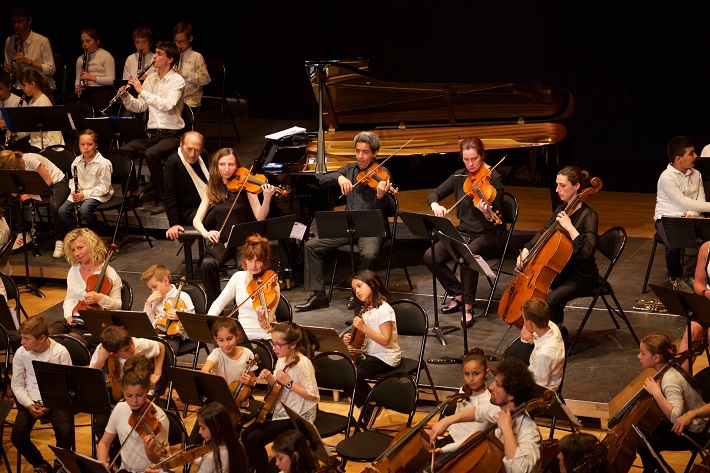 It is Thursday, 6 April 2017 and music pours out of the auditorium of the Aix-en-Provence Conservatory.  But unlike what one would expect, this music is not coming just from the professional musicians who are on stage, but also from students from three classes representing the primary schools of Gardanne’s Chateau-Pitty and Aix-en-Provence’s Henri Vallon.

The two schools are participating in a project called “Orchestras in School,” a partnership created in 2008 that provides primary education students in rural communities opportunities to learn to play a musical instrument during normal school hours and to practice as a part of a real orchestra.  In Gardanne, the project is led by Francois Le Gall, a former ATD Fourth World volunteer corps member.  Passionate about music, in 2009 Francois proposed to Gardanne’s mayor that he organize an orchestra for the city school.  Since then, every student has benefited from music lessons using loaned instruments.

Francois became the orchestra director of the musical assembly of Gardanne and had maintained his strong ties with ATD Fourth World which helped him recruit professional musicians to participate in this worthy project.  The first to join the orchestra at Chateau-Pitty was the talented Argentine pianist Miguel Angel Estrella who in 1982 had founded the International Federation of the Music of Hope with the mission to “put music to the service of the human community and to promote the dignity of every person.” This world-renowned pianist has already brought classical music to communities where ATD Fourth World is active.  He spent several days rehearsing with the students, commenting to the newspaper ‘La Provence:’  “I have worked a lot with children throughout the world.  Here they come from different communities that are drawn together and are unified by music.  I have experienced many things, but what I have experienced here has been unique.”  The pianist was able to bring the ‘Quartet for Peace’, four professional musicians who play classical music for people all over the world who are not used to this form of music.  The children were able to talk to and ask questions of these professional musicians who were so different from their regular teachers.  All this effort came together in concert this past April.

On Thursday, 6 April, after several days of rehearsal, Miguel Angel Estrella, the Quartet for Peace, and the two school orchestras performed two concerts in the large auditorium of the Aix-en-Provence Conservatory.  The 400-seat room was full!  Families, teachers and people interested in music where there to listen to the concert.  The musical program ranged from Chopin to Gershwin and included such classics as the Spiritual “When the Saints Go Marching In,” and was appreciated for its diversity.  The concert also incorporated such modern touches as a video projection of “Cinderella” while the children were playing their music.

The Gardanne Orchestra did not stop there, but went on to collaborate with another school orchestra that had just been started at the St. Brieuc school.  Students from both schools plan to meet regularly to form a joint orchestra.

This project allowed students to build confidence in themselves at school and in their own lives.  Very often, despite many difficulties, students learn to be proud of their musical accomplishments and this pride carries over to other areas.  More attentive to what their teachers are saying, but also more self-confident, these students learn to creatively work together and in so doing break barriers that had made them feel excluded.

Parents and teachers were also invited to join the orchestra, and thanks to this musical surrounding, children who had been struggling found new interest in their studies and parents found new confidence in the teaching faculty.  “Thanks to music,” one mother noted “my daughter is calmer and more focused.  She is more respectful of others.”  Teachers placed themselves in their students’ classes in order to learn a musical instrument themselves.  As one of them explained, “A student from CM2 in third year of violin is my teacher.  We quickly learn that each of us has something to learn from the other.”

This orchestra also changed the way the citizens of Gardanne thought about the school at Chateau Pitty.  Before this project, citizens had regularly asked for exemptions from having to send their children to that school in the middle of subsidized housing.  Now they no longer ask for exemptions; parents are happy and proud to have their students attend the ‘School of Music’ as it is now called.

At St. Brieuc, the school’s orchestral concerts are scheduled from 9 to 11 May.