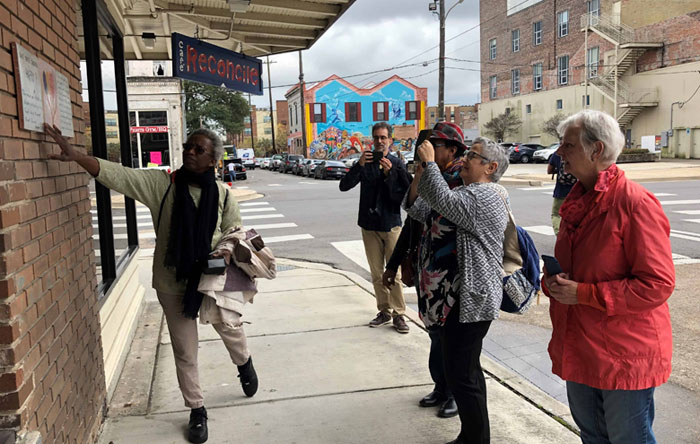 Dierdre Mauss, whom everyone calls Dee, is an ATD Fourth World Volunteer Corps member currently living in her native New Orleans. Recently, she answered some questions about how she got involved with ATD and projects she’s worked on over the years. This article is based on a longer interview on the ATD USA website.

How did you discover ATD Fourth World?

In 1981, I visited the ATD team in New York City for a summer. There, we took turns cooking and cleaning, and shared shopping expenses. We worked as a team to prepare for the Street Libraries and, afterwards, to write about our experiences. After I graduated from college, ATD Volunteer Corps members invited me to help the new Fourth World team in New Orleans.

What have you done with ATD Fourth World?

In New Orleans, as a supporter, I participated in Street Libraries, family gatherings, and study groups on the writings of ATD Fourth World and Joseph Wresinski. I introduced Bob, whom I later married, to this group. Bob and I participated in supporters meetings, sometimes hosting the meetings in our home. Our living room was filled with supporters. It was really nice, sitting around the table preparing for October 17th, International Day for the Eradication of Poverty.

We all had a strong desire to meet and work together with people with experiences of poverty. So one of the Volunteer Corps members set up a “stoop talk” to have some conversations about everyday life experiences. We loved it. Every time. We met wonderful people who all knew each other well. Bob and I were the strangers. They welcomed us. We talked very openly and freely, and I learned so much every time.

I learned that there were things I had taken for granted that I thought everybody experienced the same way. Simple things like vacations, thinking everybody went on vacation of some sort. It’s not so. I learned a lot of things. I always walked away feeling so appreciative of what they would share with me.

For example, I used to see these kids waiting in supermarket parking lots asking, “Can I help you with your groceries?” Or I’d see kids on the corner with squeegees [offering to clean the windshields of cars stopped at a red light1 ]. I walked away from those meetings with a whole new way of looking at what those children were doing. They were trying to earn money for school clothes, trying to contribute.

Our Stoop Talks group began to meet around the subject of poverty as violence, and a few more people joined us. I really enjoyed that. Then this delegation went to England and we stayed with different families. From there we went to France for the Poverty is Violence conference.

I felt such a connection and closeness by then to the people I was getting to know here in New Orleans. I think all of us still feel some nostalgia. It’s over, they are gone, it’s not the same. They dispersed to different parts of the country. A major reason was because of Katrina 2.

Why did (and do) you decide to work with ATD Fourth World?

I looked at all the things I’ve done in my life. I’ve had so many different jobs. I did all these things, and still didn’t feel fulfilled. I got called back to a job where I could get more money and get to travel, be a caseworker again.

But when I was a caseworker, I was aware that there were people who were so far behind that they would need a lot of support to reach their educational or financial goals and that it still might not be enough to complete their GED or to receive financial assistance. The road would be much longer.

I always wondered about some of them and could imagine them as friends. I didn’t like having the appearance of having power that I didn’t have. I couldn’t make a difference and people were constantly disappointed because they couldn’t budget what they didn’t have.

Since you started working with ATD, how have you changed?

The most transformative thing for me was seeing that some people who are living with the least resources have such generous hearts and yet are looked upon with suspicion and fear.

Another transformative thing was seeing the isolation of poverty. I have attended a few birthday parties where I was one of two or three guests. I regret the other parties I did not attend. Community is so important to people that they notice if you are not there, and your presence is missed even if you don’t think it could be possible. I also wrote Being Present, which is about what was transformative.

What are some favorite projects you’ve worked on?

How do you share your work with other people?

One indirect way I do it, if there is a conversation that we are having, and something is appropriate, I will share it as best as I can. If I hear somebody saying negative things about people with experiences of poverty, I’ll say my thoughts on what’s being talked about. I try to be an advocate for people who are misunderstood.

What do you look forward to doing next with ATD Fourth World?

I am looking forward to how we can clarify, for ourselves and for others, the connection between racism and poverty, because these issues are not always in the same room. People talk about racism. People talk about poverty. I’m happy that we’re talking about them both together and that we are still working on that. I look forward to our being able to bring the two together.

Dee also serves as Vice-Chair of the US ATD Fourth World Board of Directors and is on the Racism and Poverty Discussions Steering Committee.