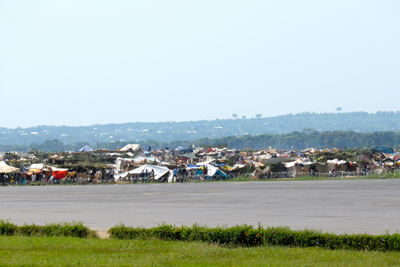 Since the beginning of the recent violence in the Central African Republic, there has been an increasing influx of foreign humanitarian aid. Most of the popular discussion of the humanitarian response has focused on promises made by foreign governments, where the aid is most needed, and the lack of financial and logistical support for the aid effort. Missing are the voices and perspectives of Central Africans who have been witnessing first hand over the past months the impact the humanitarian response is having on their country.

Below is a testimonial shared by a friend of ATD Fourth World in Bangui, reflecting on the impact of aid so far. He works in a community center that has become a shelter for children fleeing the violence, and has seen many waves of humanitarian organizations come through their center to offer help.

Details have been removed to guard both our friend’s anonymity and that of the organizations he is commenting on.

In the community center where I work, I have seen humanitarian interventions first hand. I have noticed that everyone wants to intervene in every way for the good of those who are suffering during this difficult time.

But those of us who work with youth who are living and suffering through a difficult situation and who have nowhere to go and who have been brought to the center where I work, we see that they need a support that is moral and physical and human.

I have seen several humanitarians come by.

When they pass by, I noticed the slowness of their promises. They make promises, but it is discouraging because it goes on and on and even today some of them have never come back. There is also the way they organize in order to give. It’s like we’re not humans, like there is no pre-existing structure. These humanitarians pass by, they do what they want and take care of it themselves without following the advice of the people who are responsible for the community center.

The typical example is of a humanitarian group that wanted to give oil and rice, and who brought about serious problems among the children here. Instead of letting our team take care of the distribution, they wanted to do it themselves. They made individual packets for each child. This took a long time, and was frustrating for the children and young people who were obliged to wait. We were the ones who had to take care of that. But what was most important for the humanitarian group was to be able to take photos of each child receiving his package.

The children didn’t have any wood to cook the rice, and there was very little time left, so they left right away to sell their rice on the market.

I believe that humanitarian aid should create something solid and include support to help people advance themselves. Why is it that every time there is this political and military crisis, we know that it recurs, and yet we don’t look for a sustainable solution. We need to all sit down together to come up with sustainable solution between the government, the humanitarians, and the rest of society. It’s no longer about giving food and clothing, but about sitting down together to talk and build partnerships and find a solution.

If these humanitarian groups don’t sit down and stay with the local population to reflect on this together, there will be no solution, we won’t make it.

Sometimes it fails when we see these humanitarians are moved and support us, but then the way they give is discouraging: as I said, the way they give isn’t good, they’re giving to human beings. Everything that has been given so far, you can find it afterwards in the markets. We have to find a strategy that makes this sustainable in the lives of people. Today we give rice and soap, but what do we do tomorrow?

The politicians need to sit with us and talk. Why this hate? The humanitarians, their role shouldn’t be to give but to help this consultation. […] The role of the humanitarian should be to sit down and reflect with the people of the country in a collegial manner. Because even among the humanitarians they are all acting on their side doing the same thing and not listening.

This is what I think about the humanitarian intervention. Humanitarian aide must not be an act of charity but a reflection.