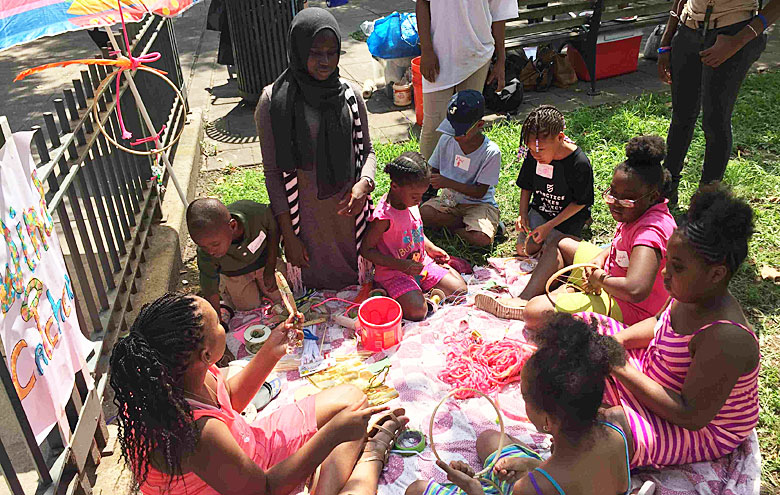 A member of ATD Fourth World who grew up in deep poverty says, “Even if I had never met ATD, it’s possible that I might have managed to pull myself out of poverty. But what I would never have done without ATD was to make the commitment to keep going back to my people. …[W]e need to be together.” Over four generations in New York City, this mutual support has helped some remarkable women overcome obstacles and resist the violence that surrounds them.

Crystal Danzler grew up in New York City. After evictions and fires, social services often sent the family to emergency housing shelters. When Crystal was 20, she explained the positive impact of ATD’s Street Library program:

“I grew up in a violent neighborhood where there were no community centers or after-school programs — pretty much no place to go but home or the streets. Thanks to the Street Library, the streets became a happier place. The Street Library gave us values to help reduce some of the violence. The streets were tough, so we had to be tougher.

“During the Street Library, the street became a place where we could sit and read, draw, and make things. The Street Library blanket would go out on the sidewalk, or in a hallway, wherever we needed it to be. When that blanket goes out, a place that was violent before turns into a safe place.

“There are young people who used to make trouble because they wanted to be down. But the Street Library was for them too, and some of them changed. When I saw how they were before, I would never think they would become a great person. But they changed.

“Growing up with Fourth World has helped me become the person I am today. The ATD Fourth World family has taken me to places the streets can’t.

“It taught me to keep a positive outlook and it inspired me to always give back to my community and to be a positive impact wherever life takes me, just like Fourth World has been to me.”

“Zena had her children very young, and lost a son. She had to live in so many emergency shelters before she finally got into public housing. Her brother was killed. She’s gone through so many things; and this young lady had no high school diploma.

“The years she spent with ATD Fourth World gave her confidence. So finally she asked her children’s teachers, ‘What about the parents? We want to get an education too.’ And they listened to her! With her, those teachers [started an adult education class]. And Zena today has a high school diploma.

“When we first met, it took her years to begin to trust me. But today, she has amazing confidence. I said, ‘Zena, if I could go back to school at 40, you’re so much younger, you can do it!’ When someone has faith that you can do something, you can’t disappoint them. Many times I wanted to give up, but someone would tell me to just try to hang on. You feel: ‘…They believe in me.’ They gave me a sense of self-worth. I think that’s a great deal of what I give to younger people with ATD Fourth World.”

“My mother encouraged me”

Jean Stallings’ mother had to leave school at age 14. She herself left school at 16 in order to earn money doing housework. “You need support when you’re alone and overwhelmed,” she says. “You’re always worrying about food, clothing, and the children…”

“I didn’t have a high school diploma,” Ms. Stallings continues. “Years later, my mother encouraged me [to get a college degree] at 40. That’s why I’ve supported others who are going through many struggles today.”

Ms. Stallings has watched lots of children grow up involved in ATD programs. “I met many of them when they were very young, and they’ve grown and developed into advocates for others. They have brought people out of housing projects and into ATD Fourth World meetings.

“They have said, ‘You can learn to express your feelings without going to the streets, and without getting involved in crime. You can do something that is going to help you and your family and give you a sense of pride.’ They bring with them young people who you maybe would not want to pass in the streets because of their attire. They turn out to have a heart of gold. They want the same thing as any other child.”

“Believe in yourself” passed down over four generations

The mutual support among these families spanning four generations demonstrates that a critical element in overcoming long-term poverty is giving people encouragement, self-confidence, and pride. Often the best placed people to do this are others who have experienced deep poverty themselves. ATD has provided a forum of peer support and community building for over 60 years in New York city and many other countries around the world.

“Jean Stallings’ quotes in this article come from her Afterword in Until the Sky Turns Silver.”