The Story of the One Hundred Trades Courtyard in Burkina Faso 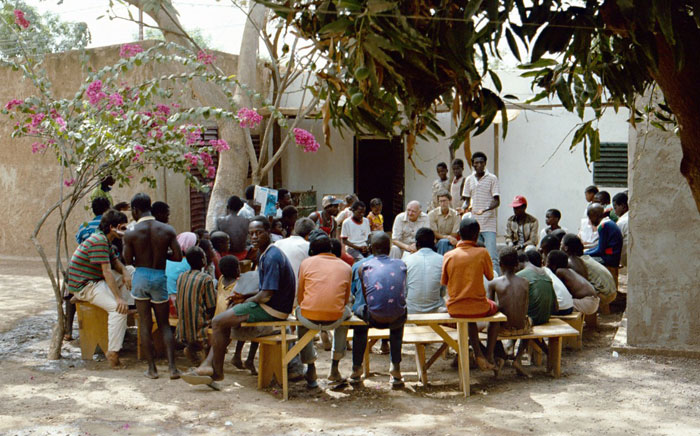 ATD Fourth World invites people from around the world to document real-life “Stories of Change”. These stories are about situations of injustice and exclusion caused by extreme poverty. Written by activists, community leaders, and others, they show that when people work together, real change can happen.
More about “Stories of Change”.

Children and young people living in poverty work with the “One Hundred Trades Courtyard” in Burkina Faso. Little by little, they are inspiring their country to leave no one behind.

In the 1980s, ATD Fourth World was seeking to strengthen its ties with the African continent. In July 1982, Joseph Wresinski asked me to go to Ouagadougou in Burkina Faso to become “a friend to the children and young people on the street”. I joined two other members of the ATD Volunteer Corps there, working in a l’Arche home for children with disabilities.

At first, I spent my time walking around, discovering the country. As I did so, I met people who were concerned about the future of young people and children who live in the street. I learned about local initiatives designed to help them. In addition, I met with other people who wanted to connect with these children. There was Luc, a civil servant, and Jean, a young man working for an art dealer who dealt in bronze. The three of us formed a small group of friends.

Regularly we went to visit places where the children gathered—the market, the post office, the train station, the town centre, the public water and electricity utilities, etc. This allowed us to establish friendly relationships with several groups of children.

Sundays or holidays were good times to identify children who were alone and without supervision. We met with numerous requests for healthcare, lodging, food, clothing, etc. First, I tried to understand the support networks the children already used to handle their difficulties. We wanted to be aware of the many individual or group aid initiatives so as not to duplicate them.

One day, a group of children from the market asked us if we could “celebrate Christmas”.

That was our first opportunity to organize a project with all the children, without exception. We wanted to reach out to the weakest children with a project that would involve everyone. The invitation was open to all, regardless of their affiliations with various groups. We asked everyone to contribute.

The area’s Christian and Muslim leaders paid us a visit. Despite some tension, the meeting was full of hope about getting the celebration off the ground.

Work only brings you trouble

My friends and I wanted to better understand the life of the young people on the street and their aspirations. So we conducted a group survey about all the small trades they had tried. Without entering into an intrusive dialogue about their situation, we asked them how they had found their work. What were their experiences? Why had they stopped?

Every single one, from the youngest to the oldest, took a turn. Each spoke with great respect and listened to their peers. We recorded their words and then showcased them in a large album. Often the children and young people would come to read this collection. The older ones observed that they no longer looked for work because it only brought them trouble. As one of them explained, “If you find an apprenticeship and there is a theft in the building, you are quickly accused of being guilty because of your history of living on the street.”

A positive view of work

What the children and young people described led us to invite craftsmen to deliver short workshops lasting one or two weeks. These workshops showed the youngsters the many trades that exist and gave them a positive view of work. I suggested that these workshops take place in the large courtyard of the building where I lived. And that’s how the “One Hundred Trades Courtyard” was born! 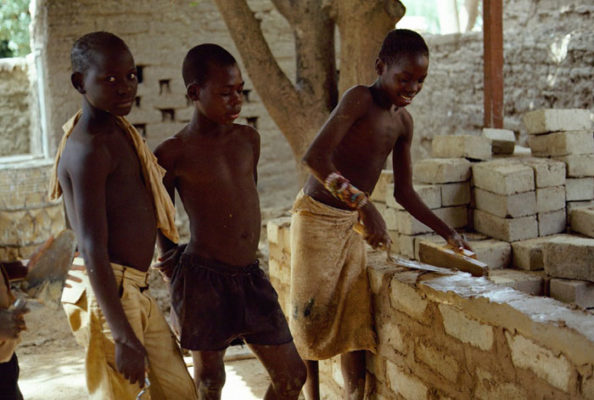 Building their own project site

At first, the workshops only lasted around half a day, so that the children wouldn’t lose the work they had in town. A small workshop stipend ensured that they could buy their evening meal. We gave priority to training initiatives. Funding from UNICEF allowed us to purchase our first basic tools. Thanks to several bricklaying workshops, we constructed some buildings out of muddy clay. These included a large room, a shed with a tool storage area, and two adjoining rooms.

Running water and a shower area allowed the children to wash themselves and their clothing, but only at lunchtime so as not to interfere with work hours. In conjunction with the local pharmacy and hospital, we set up a health centre to ensure routine family healthcare. A public health official was available to answer questions on health topics of concern to children.

Very quickly, the craftsmen running the workshops learned that they had to involve the youngsters in their work, rather than teaching them a trade in the traditional way. There were carpentry workshops, sewing, leatherwork, bronze casting, and making wooden games.

The challenge of visiting home and family

The children and young people who had been on the street for a long time soon asked us to take them to their villages so they could tell their parents that they were “working”. A new more trusting relationship began to develop. Little by little, some of the children began to ask us to look after the clothing that they had bought to get ready for a visit to their family in the village.

My friends and I tried to figure out how to make these home visits go well. Seeking advice from family members living in the city, we asked how to ease the first contacts after a long separation. We discovered that the children wanted to be useful and to feel respected.

During this time, the city began to get ready for the Pan African Film Festival (PAFF) that takes place every two years. The children felt a lot of anxiety because the police conducted large round-ups to protect the numerous tourists who came for the festival. So we asked festival organisers to involve the children in running the event. The organizers suggested that they might clean one of the areas where the festival took place. Around a hundred children and young people organised themselves. Enthusiastically, they cleaned the area around a large auditorium, expecting nothing in return. Truly moved by this, the organisers gave them a meal.

Some days later, the children were, in fact, rounded up in great numbers. Fortunately, the organisers wrote a letter that enabled us to get them out of the Police Station and lodge them in our Courtyard during the festival. The police even suggested that we take children who were not on our list. We were then able to set up an entertainment stand for the children in the festival area. The Social Action Minister was impressed by the children’s attitude. Clearly, they were proud of contributing to this great African gathering. Some film directors even came to meet the children in the courtyard after their films. 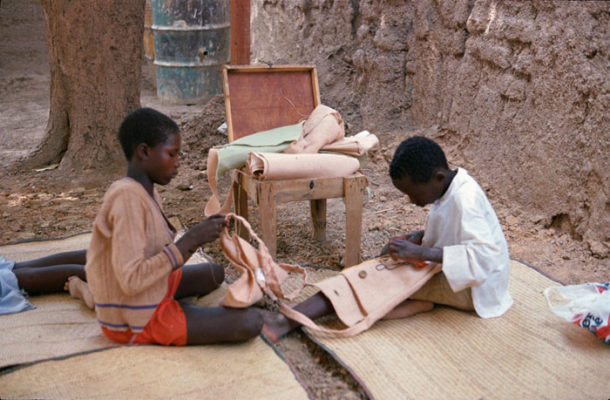 Eager to help even after being ignored

The Minister asked them to participate in the “railroad struggle”, an effort to extend the railway up to the mines in the north-eastern part of the country. There was a special day for the street children to contribute to this project.

One regret we had was that other railroad mobilization efforts organized for young people had not included those we were working with. Nevertheless, the young people we knew responded en masse and spared no effort.

We wanted to help other community members better understand the lives and hopes of these children and young people. To this end, children from different parts of the country developed a play inspired by their own experiences. Named Et l’on chercha tortue (And we looked for the turtle), the play was performed throughout December 1987 in the “La Maison du Peuple a Ouagadougou” theatre before an audience of nearly 2,000 people.

Today the Courtyard project continues to seek out a new generation of children and young people, and to connect with extremely poor families. The country has also invested in training teachers so that they can work effectively in open environments such as this one.

More about ATD in Burkina Faso.